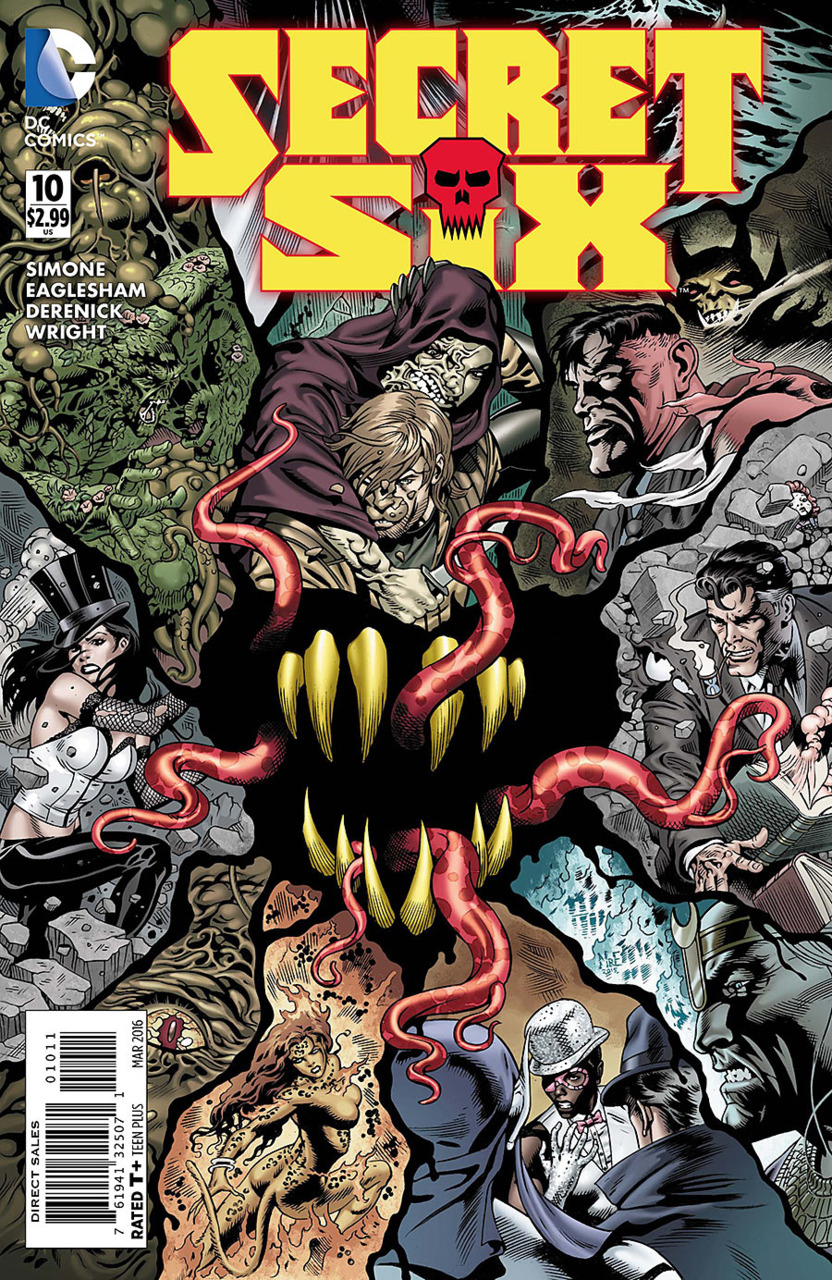 The Six continue their quest to save Black Alice as they risk a Lovecraftian apocalypse in Secret Six #10.

The issue opens with a profile of the baddest of the Dark Giants, Thrumm that is being kept away from Earth by the alabaster pillars the Six are trying to destroy. As the pillars are being knocked off one by one the evil creature is getting excited to return to his former stomping grounds to cause more pain and misery.

Meanwhile in Metropolis Superman, yes Superman, fights and destroys a HIVE War Machine when he comes upon Zatanna. She explains the situation regarding Black Alice and tells him of the alabaster pillars and that the Secret Six are endeavoring to destroy them. As it turns out the final two pillars are located deep beneath the building they are currently on top of.

Deep below the building the Six are looking for the pillars. To recap: if they destroy the pillars that separate the world of evil from our universe they can save Black Alice’s life even though it will bring the Dark Giants to destroy the earth. They inexplicably decide to deal with one problem at a time: save Alice. They can deal with the end of the world later. They find the pillars but before Porcelain can break them Jeanette collapses and appears to be on the brink of death.

Meanwhile in the House of Strangers where the DC magical characters live Deadman seems to be fading in and out of existence. They posit that Black Alice is sucking the power from them all.

Back in Scandal Savage’s apartment Black Alice is trying to get Scandal to kill her. Alice is unwilling to bring on the apocalypse just to save her life. Scandal isn’t keen on doing the act though Ragdoll seems ok with it. Alice also understand that her powers are out of control so has a sense of urgency to end her life. Scandal finally agrees to do the deed.

Back at the alabaster pillars Superman arrives to stop the Six from their quest. The Six attack him. At the House of Strangers the magical characters decide they have to go to war to protect themselves.

At Scandal’s apartment Alice isn’t dead even though Scandal has stabbed her through the heart. It turns out that Black Alice is possessed by some kind of creature.

Back at the pillars, Ventriloquist brings the cavern down on Superman. Supes sets his laser vision on Ferdie setting him on fire. Porcelain touches Superman and begins to crack his hard Kryptonian body. Before she can destroy the Man of Steel, Big Shot stops her due to their past history. Dibny asks for Superman’s help instead. Suddenly the Magic Users arrive on the scene to get the Six to stop their antics.

At Scandal’s apartment the creature possessing Alice explains that when Alice was in the car wreck that killed her family she called out to the demons to save her. Alice doesn’t realize that she died in that crash but is being animated by the spirit of one of the demons. And she warns that if Scandal tells anyone, she will give her a bad time.

Alice disappears and emerges in the tunnel where the pillars and assorted cast members are. She says she is ok and embraces Big Shot. They return to Big Shot’s suburban house. Alice isn’t aware of what transpired but is happy to have things back to normal. However, with two of the four pillars destroyed the evil Thrumm has been able to reach out and create a disciple out of Alice. Until next month…

I have been looking the other way for a few issues now at some of the absurdities of this arc’s plot but I can no longer ignore the problems in the story. The idea that the Six would risk an horrific Armageddon to save Black Alice without even trying to find another way is insane on its face. Past issues have had enough stuff to make me think that maybe they are up to something cool and I just don’t know about it. But now it turns out that the whole adventure was a boondoggle that has been cut short without a real resolution. Why were there four pillars: one at the bottom of the ocean; one in an abandoned mine guarded by a Yog Sothoth; and now TWO in a Metropolis basement. Why two? It seems to me like Gail Simone couldn’t come up with enough plot to fill another pillar-destroying issue and so decided to wrap up early.

And then Alice just shows up, says she is better and the pillar killing plot is wrapped up.

There were also some weird characterization choices. Scandal Savage didn’t want to kill Black Alice but Ragdoll was eager to. Why? Alice and Ragdoll have a history together and unless I missed a story line somewhere they have a very close relationship.

Black Alice did have some cool scenes/lines in this issue and I have hopes for the future story, but this is the issue that I can no longer hope for the future. The future is now baby and it is time to pay the piper.

Dale Eaglesham and Tom Derenick’s art is terrific as usual. There are some great drawings of Superman and one particularly bizarre drawing of Alice imagining walking though a city being destroyed by her magical creations. And Alice’s face before she leaves Scandal’s apartment is deliciously devilish.

Jason Wright’s colors are also good. There is a good separation between the browns of the underground tunnel and the greens and blues of the land of the Dark Giants. The colors also help make Superman look as good as he does in this issue.

Like I said, I am going to give this issue a fairly low rating due to its ridiculous plot. There is hope that it will get better, but this is issue #10 and I’ve been hoping for back-to-back good issues for a while now.