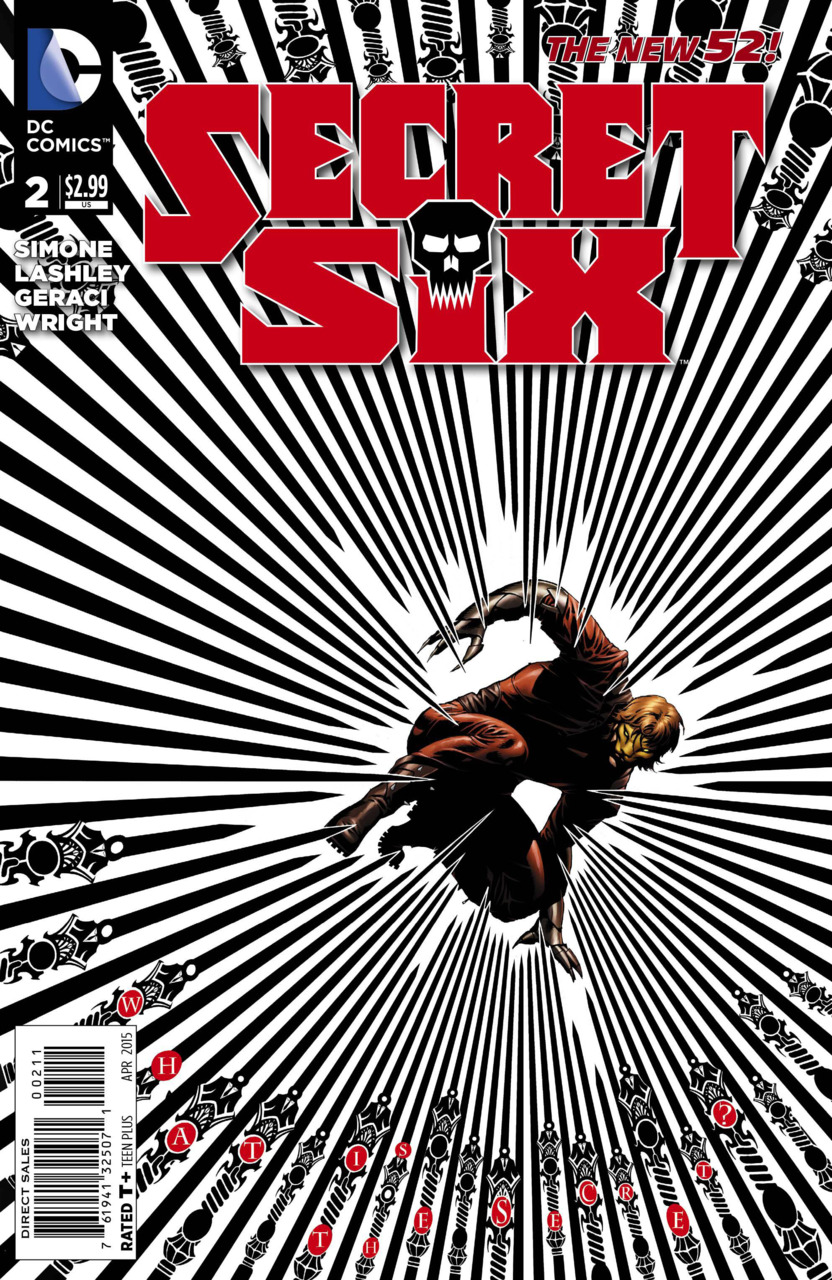 Issue two of the Secret Six begins with a flashback to eighteen months ago. Blake is shown being hauled away by several unnamed men taunting him as they take him away. We learn that this has something to do with something called Project Mockingbird. Blake is told that he will be here for a “while”. Blake does not like this and to show his displeasure, he bites down hard on the hand of the one of the men to the point of almost biting the man’s fingers off. In order to force Blake to release his hold, the other men have to literally beat him in the head. Blake is not knocked unconscious and here we officially learn of Blake’s alter ego as Catman. Catman is then thrown into a cell for “precisely one year”.

We cut to the present where Big Shot calls Blake, Catman. Blake asks what did Shot call him and Shot retorts that he knows that Blake’s working name is Catman and that he is a bounty hunter. Shot tries to reassure Blake that they are going to get out which Blake scoffs at. We are reminded by the “announcer” that the subjects are to answer the query “What is the Secret” and failure to do so within one minute will result in the termination of one of the subjects. The Ventriloquist’s dummy Ferdy taunts Blake, nominating him to be the one to be terminated. Blake again as in the last issue seems to go into another panic attack stating that he has to get out of the box.

We go back to the flashback with a caption of four weeks in where Blake is woken up in his cell with what I think is a meal call by a man who seems to have a smile similar to the Joker’s. Blake promptly grabs the man’s throat through the bars of his cell door. Blake threatens to crush the jailer’s throat. The jailer responds to Blake’s question of why is this happening to him by stating that he has a debt to pay. Blake releases the jailer after the jailer informs him that no one else knows that Blake is there and if the jailer dies, Blake will starve to death. The jailer states that there are no hard feelings but to punish Blake he turns on the sprinklers in Blake cell for a couple of days.

We return to the present where Blake’s companions comment on his state of mind. Strix suggests that “maby shood kill”. Big Shot draws the group’s attention away from Blake and who should die, to what the message means. Porcelain responds with a question of her own, asking if anyone in the room had ever met before. Ventriloquist responds that she meets many people in her “Hollywood parties” and she cannot be expected to remember anyone in which Ferdy asks about a tryst they had, giving a sexual connotation to his words.

The announcer calls time and demands that one subject be chosen. Shot attempts to rally the others by calling for a fight. Ventriloquist suggests that Blake should be eliminated. Blake responds with a crushing punch to the face of the Big Shot. Ferdy goads Blake to attack him and appears to walk towards him. Blake realizes that the Ventriloquist is able to make the dummy walk. Blake asks her is she can lift the box within which they are trapped. She says she might be able to but she wants Blake to kiss her first. While the announcer demands for a choice or one of the subjects will be randomly chosen, The Ventriloquist plants a wet one right on the mouth of a surprised Catman which would be funny if it wasn’t so gross. Ferdy does not like what he is seeing which also would be funny if it wasn’t so gross.

Back to the flashback, thirty weeks into Blake’s captivity a small voice calls to Blake through the door. It is a woman who is holding a package. She realizes the cruelty and gives him the package to hopefully help him make it through to the end. It is revealed that the woman gives Blake a small cat which pleases Blake. The woman leaves.

Back to the box we see that a subject had been chosen for elimination. That subject is Black Alice and she is being executed by electrocution. Blake persuades Ventriloquist to try to lift the box. Here we get a glimpse of the people behind the experiment. They are responding to a power failure affecting the box. The men watch as the box in the shape of a coffin rises out of the sea.

Back to the captivity flashback, it is the end of the year. The door to Blake’s cell is unlocked and Blake is told that the cat’s presence was known. The jailer suggests that the woman who brought the cat was killed. Blake threatens to kill the jailer but first he will have to find him.

Back to the present Shot gets Porcelain to weaken one of the walls which allows Catman to jump through to freedom. The others jump out to join the fight against the guards. Shot cradles Alice in his arms. One of the villains gets the drop on Shot which Alice respectfully responds that she can take this. We hear her give a rhyme ala Etrigan the Demon and turns into Hezkinvade and guts the gunman.

This issue delves deeper into Catman through the flashback scenes. The role of the other five in this issue is to act as a foil to Thomas Blake and to showcase his ferocity in combat which we previously saw in issue #1.

The Ventriloquist continues to disgust me and perhaps that is her role in this book, we shall continue to see.

I am more interested in Alice especially after the reveal that she is a demon like Etrigan, I am curious to see what their connection is and will we be seeing Etrigan in the future especially since his current appearances will end when Batwoman completes its run in the next couple of months. She also showed powers similar to Zatanna in the first issue. What is her power set or does she just have the ability to mimic other’s powers even if that person is not present?

I enjoyed the action scene in the end when the Six fought back instead of sitting by. The last issue introduced the characters and was more of a talky issue, while this issue showed us a little what they can do. I believe that this issue delivered on the action.

Now that the Six are loose, what mayhem will ensue, only time will tell. I still have to get over the Ventriloquist’s presence and maybe she will have a better role to play in the future.