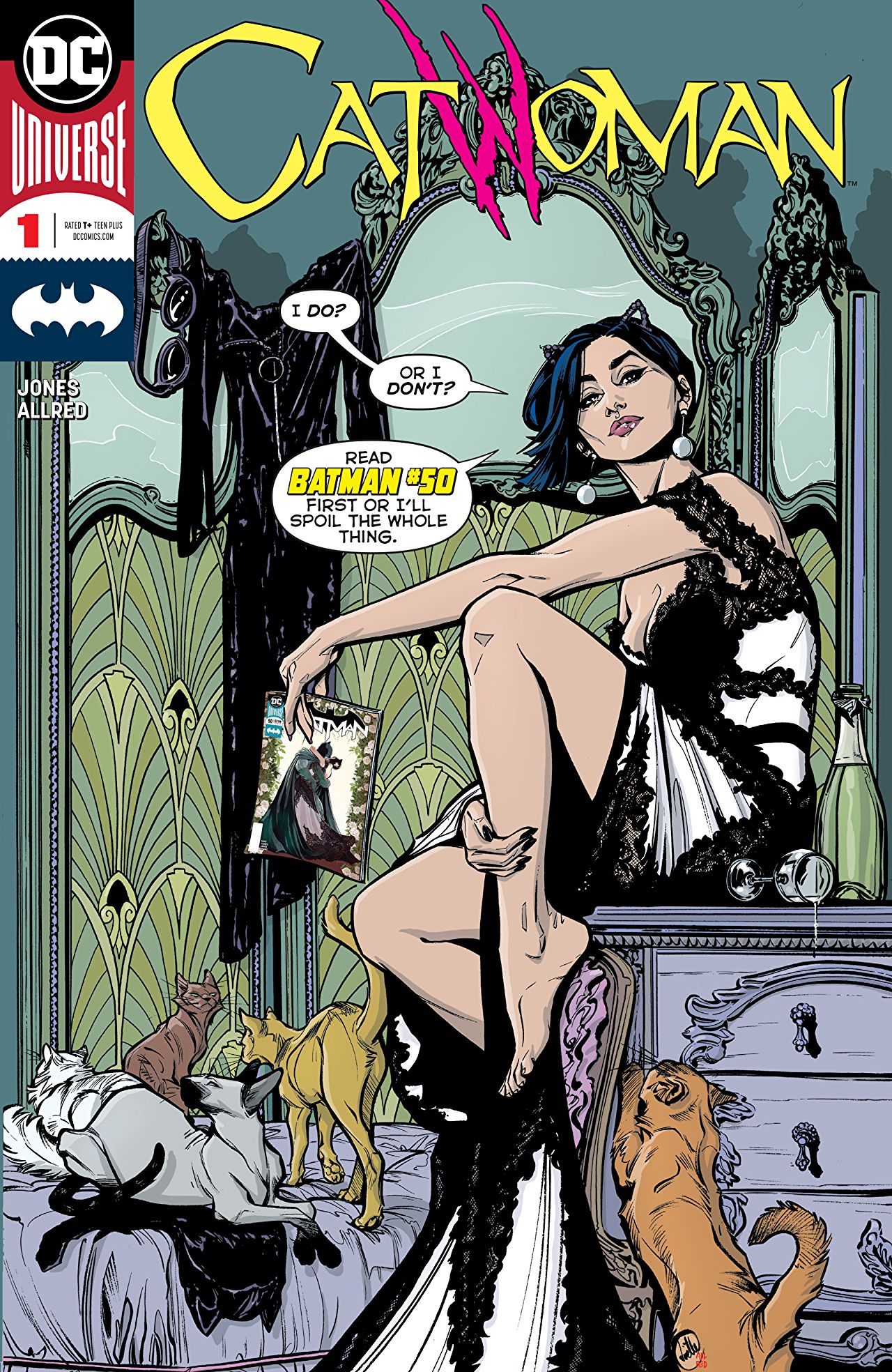 Overview: A week after Catwoman has left Gotham City for Villa Hermosa Mexico, she finds herself hunted by the police. Why are they on her trail and what can she do about it?

Synopsis (spoilers ahead): It has been a week since Selina left Gotham following her (spoiler alert) aborted wedding to Bruce Wayne. She is unable to sleep and spends her time in the gambling rooms of Villa Hermosa Mexico.

There is also a woman in a Catwoman outfit in town causing havoc which includes shooting police officers.

As she makes her way from one gambling room to another she is confronted by the police. They know about her identity as Catwoman and believe it is she who has been on a crime spree. She is wanted for killing two police officers. Using her Catwoman derring-do she is able to evade capture and get onto a subway train ahead of the cops.

Raina Creel is the elegant wife of the Governor of Villa Hermosa and is on a TV talk show defending herself against criticism from the news media. Raina appears to be the real power behind her husband, the Governor. When she is alone with her close staff she removes the elegant clothes, teeth, wig, and nose (!?!). It turns out that she is a decrepit crone that needs blood transfusions and injections to keep the facade of beauty. Her two sons arrive and they bring in a woman dressed in a sleek black Catwoman onesie. Raina is angry that the impostor killed some police officers against her wishes.

Will, a police officer in charge of solving the murder of the cops, pledges himself to find the killer before the powers-that-be shut down the case.

Selina returns to her hidey-hole in town where she receives a package from Alfred Pennyworth. It is her Catwoman outfit. This upsets her. The news reports that Catwoman is the cop killer so Selina puts on her kit (which is sans armpits) and heads out into the night to clear her name.

Selina runs into another Catwoman and they fight. The impostor is able to evade her but Selina makes chase and follows her into a room where she finds a score of women in Catwoman outfits. Uh oh. Until next month.

Analysis:  What can I say? This is not the Catwoman book that I thought I was going to be reading.

Selina’s skipping out on her and Bruce’s wedding was a shocker and this Catwoman series, which I expected to be about living with the Bat, is going to be about something very different. The book does deserve to be judged on its own merits however and my disappointment at the uber-plot won’t affect my enjoyment of a book with Selina, my second favorite character in the Batman Universe after Batman himself.

Writer and artist Joelle Jones is given the difficult task of navigating us through this unexpected country and does an admirable job. Selina is in shock at her decision, it is clear that she has very mixed feelings about skipping out on the wedding and is struggling. From my reading of Batman #50, she didn’t go through with the wedding because she felt that if Bruce was happy that he couldn’t be effective as Batman. She felt Gotham needed him and keeping him for herself was selfish.

The person that it appears will be the antagonist, Raina Creel, seems to have some agenda which is hidden so far. Her transformation from an elegant political wife to physically decrepit criminal mastermind was well done. Though I’m not sure how good a fake nose has to be to fool HD TVs. Also, there seems to be an awful lot of English signs on the storefronts. I hope I’m not wrong about her being in Mexico.

The art is often beautiful, other times dynamic, yet always visually engaging. The full page of Selina in Catwoman garb out on the town is classic Catwoman. Laura Allred’s colors are very appropriate here. There are lots of violets, blues and even some muted pinks that give Villa Hermosa a dark lived-in feel that effectively reflects Selina’s emotional state.

Selina’s new outfit looks great. I’m not sure if the exposed armpits are practical since her exposed skin might be visible in the dark. However, the lines are terrific and I’ll rationalize the choice by thinking about how beneficial ventilation can be in hot and humid climate.

I promise not to whine about the wedding too much but it is probably good for readers to know that I am hoping, as Tom King hints, that the marriage between Bat and Cat is still in the future. If so, this book will be a front row seat into Catwoman’s mindset. If not, well, we’ll always have Selina. And we are in good hands with Joelle Jones. I am being conservative with the rating to give this book room to grow.

Final Thoughts: Catwoman’s new post-engagement life starts off perilously as she is thrust into a new mystery while she tries to deal with the emotional fall out of her decision to skip her wedding.