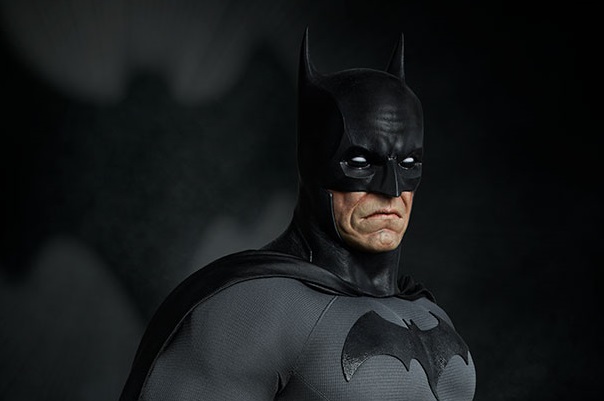 As an update to a reveal last week, Sideshow Collectibles has released new photos and details for their Batman Legendary Scale Figure. This figure is just over three and a half feet tall and will set you back a hefty $2300. So if you are interested in adding one to your collection, start saving now. If you are ready to make the commitment, you can pre-order the statue here.

Sideshow is proud to introduce Gotham’s own caped crusader Batman as the next addition to Sideshow’s line of Legendary Scale™ Figures.

Based on his comic book appearance, the Batman Legendary Scale Figure has a grey and black costume adorned with a yellow utility belt and his ever-present bat insignia on the chest. The solitary crime fighter is clad in a fabric cape, standing in a powerful pose as he emerges from the shadow to confront evil in his city.

Sideshow’s take on this iconic hero is crafted out of polyresin, fiberglass, and fabric. As a part of our Legendary Scale™ lineup, this half-scale depiction of the Dark Knight himself stands an impressive 43” tall and is 22” wide at the base. The Legendary Scale Batman will be priced at $2,300.