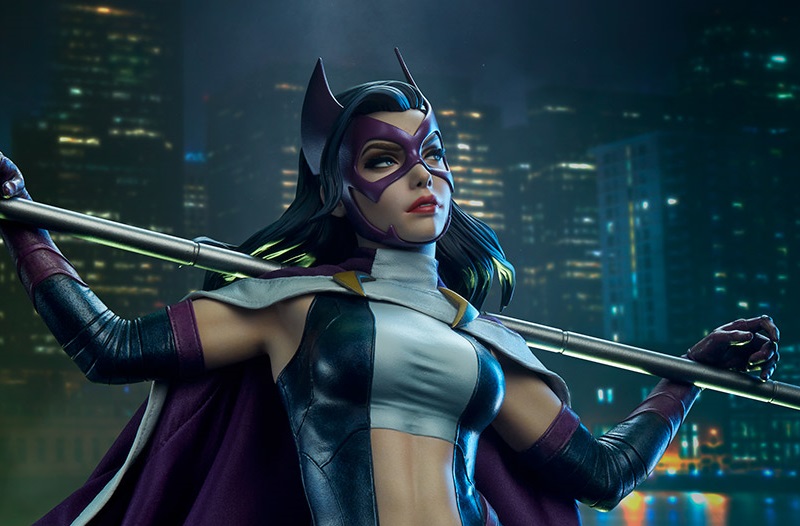 Sideshow Collectibles has released details for their latest Premium Format figure, which features Helena Bertinelli as Huntress. The new statue measures about twenty inches tall and features awesome fine details throughout including the base. Huntress is featured in her standard comic costume. It is priced at $585 and is expected to ship between June and August 2022. You can preorder the statue at Sideshow Collectibles.

The Huntress Premium Format™ Figure measures 20” tall and 17.25″ wide as Helena Bertinelli confidently strolls down to the seedy docks of Gotham, looking to bust a mafia racket. The rotting wood boards add to the dramatic atmosphere of the criminal underbelly of this notorious city, and the base is littered with the discarded weapons of her targets. With her bo staff draped casually over her shoulders, this master martial artist sets her sights on taking out anyone who stands in her path.

The Huntress Premium Format Figure is a mixed media collectible with a tailored fabric cape with wire in the hem for posing, allowing you to craft a dynamic display as Helena gets the drop on Gotham’s criminal underworld. Inspired by her appearance in DC Comics, her sculpted costume consists of a bodysuit, belt, gloves, and thigh-high boots in her signature purple and white color scheme with gold accents. Huntress’ winged mask frames her face, and her portrait sports a relaxed raven-colored hairstyle.

Pair the Huntress with the Black Canary Premium Format™ Figure by Sideshow, sold separately, to unite these iconic Birds of Prey teammates on your shelf.

Kick the crime out of Gotham City and recruit the Huntress Premium Format Figure to your collection today!