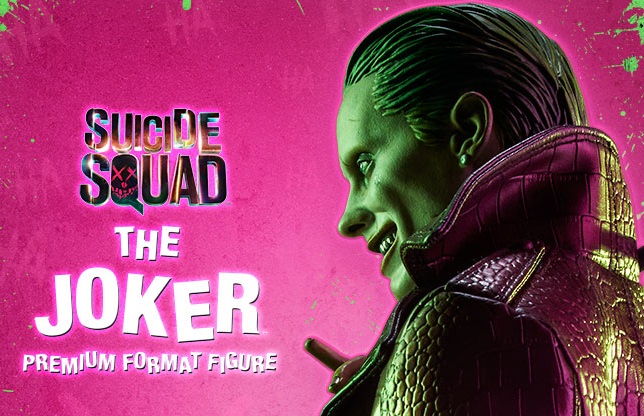 Sideshow Collectibles has revealed details for their Suicide Squad Joker Premium format Figure along with a number of pictures. With two different editions releasing and priced at either $530 or $540, start saving now. No word on when the figure will ship, but pre-orders will go live this Thursday, Spetember 21.

Sideshow is proud to present The Joker Premium Format™ Figure, based on Jared Leto’s memorable, maniacal performance in the DC film Suicide Squad.

Standing 21.5” tall, The Joker is ready to strut his stuff as the reigning criminal kingpin of Gotham. Holding a jeweled cane over his shoulder and a gun at his side, the Clown Prince of Crime has stepped straight from his on-screen appearance to take center stage.

The Joker has an eye for flair, decked out in rings, chains, and even his silver grills in that vicious grin of his. A variety of detailed tattoos brand the man from head to toe as a dangerous deviant who is not to be trifled with. The Joker Premium Format Figure features mixed media elements, sporting a tailored purple faux-alligator coat, purple and gold fabric boxers, and Batman-themed leggings.

The Exclusive edition of The Joker Premium Format Figure includes a swap-out hand holding a razor knife, because this guy’s a real cut-up! He’ll put a smile on your face, no matter what.

Pair The Joker with the Harley Quinn Premium Format Figure from Suicide Squad and reunite the ultimate partners in crime, complete with matching bases.

He’s ready to squad up with any DC display- do you think you can handle the insanity?