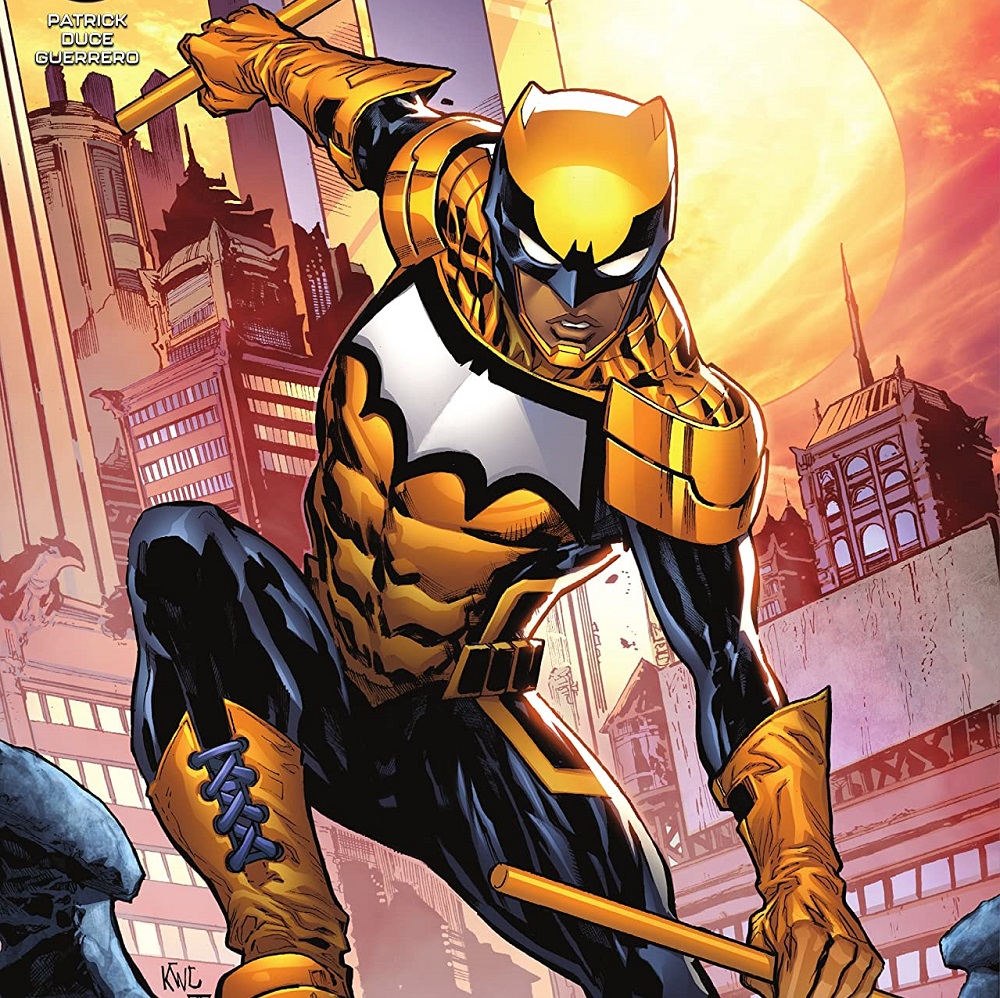 Overview: In Batman Secret Files: The Signal #1, Duke Thomas, the Signal, deals with betrayal and a whole new world of super crime as he returns to patrolling Gotham during the day shift.

Synopsis (spoilers ahead): Batman Secret Files: The Signal #1 opens with a splash of the Signal’s head under the boot of an unknown antagonist, then flashes back to that morning, as Duke trains with Cass in his base, The Hatch, telling his former Outsiders teammate that she’s slow. His head of operations, Izzy (from We Are Robin), interrupts, giving Duke his briefing before his dayshift patrol, including a lot of unusual events.

We flash back further to Batman briefing Duke on his training schedule, then Izzy tells him to head to Robinson Park to stop some kind of terrorist threat. When he arrives, his former We Are Robin teammates Riko Sheridan and Daxton Chill, now going by Rook and Alt, take out the threat, but also accuse Duke of abandoning them and their friends, as well as demonstrating strange new powers. Riko somehow hijacks Duke’s powers to access something called the White Market, then lets her new boss, Xander Pearl, an 18 year-old social media and tech billionaire, meeting with Bruce Wayne, know of her progress. Pearl mocks Bruce’s loss of wealth and status and boasts of his own plans in Gotham.

Duke takes out Dax, mocks him, then enters the White Market following Riko, marvelling at the supervillains shopping for an upgrade. He almost manages to steal some anti-Joker chemicals to heal his parents, but Riko is caught by Parasite, and Duke rescues her. Riko and Dax are teleported by Xander to meet with him, as he ditches Bruce. Bruce reveals that he used the meeting to obtain Xander’s biometrics and clone his phone with Oracle’s help.

Duke discovers that he can use all of his powers at once and escapes from the White Market with serious injuries. His abilities, however, develop into rapid healing. Batman is beside him when he wakes up in his base, telling Duke of a new threat – a sect of the Religion of Crime – and advising him to heal from the mental injury from his confrontation with Riko and Dax. Izzy tells Duke that he can’t do it alone, but he insists he can and later ignores his uncle and her attempts to talk.

The next day, Duke invisibly investigates a hole blown into the Gotham Central Rehabilitation Center, where his possible biological father is incarcerated, with a promise that the story will be continued.

Analysis: With two short stories and a three-issue miniseries under his belt, all focusing on Duke Thomas, writer Tony Patrick creates a new one-shot in Batman Secret Files: The Signal #1 about Duke which attempts to weave a narrative about the character’s long term trajectory, as well as giving him relational drama with his supporting cast and a serious new threat to face in ongoing content. Scott Snyder has revealed that Patrick “has a whole pitch I love – my dream is for him to be Gotham’s protector by day, do a book about young Gotham, threats growing in the light, etc. But I’m not Gotham’s mayor anymore,” indicating that he doesn’t necessarily have the power to make it happen. This comment once again brings up the frustrations Snyder has that he created Duke and then only half-heartedly pushed him in his own writing, leading to incredibly inconsistent development of Duke by Lee Bermejo, Tony Patrick, and Bryan Hill. Patrick has said in interviews that while he has significant plans (hinted at in the “To Be Continued” of this one-shot), he doesn’t necessarily have any assurance that they will be published. And that problem – the issue that Duke has been a side or supporting character who has uneasily emerged into the spotlight and then receded several times, indicates one of the major problems with both this one-shot and the previous Batman and The Signal miniseries.

Patrick is clearly an incredibly ambitious writer with some really great ideas – the White Market in particular, and the gleefully nasty Xander Pearl, show real storytelling potential – but they simply don’t fit into the space that Patrick is given. Batman and The Signal stuffed dozens of ideas into three issues (which should have at least been six, like the other New Age of Heroes comics, but for some reason was only three), but failed to seriously develop any of them to any kind of satisfying development. Scott Snyder continues to say that the Signal material is “more successful than we expected,” but that doesn’t play into any kind of serious focus on Duke.

The marketing of this story as a one-shot when it ends with Duke failing to stop anything by himself, but then refusing to actually network or form a plan to deal with the multiple problems he faces, really throws into question what DC wants readers to think about the character. Instead of giving fans of Duke a story where he actually accomplishes anything, they give readers a story where he fails at nearly everything except saving his former friend Riko. Combine that with having the book tell the reader that Duke is being trained to be on the level of the Justice League, while simultaneously denigrating other Bat-Family members (Damian, who has functioned almost entirely solo for over six years, is said to need “constant supervision,” and Cass, the universe’s greatest hand-to-hand fighter, is said to be “mad slow”), and it feels like character favoritism, which isn’t helped by the continued incoherency of the portrayal of Duke’s powers as something which he doesn’t understand, the reader doesn’t understand, but nonetheless always conveniently gets Duke out of trouble (and magically develops into healing powers, too).

The attempt to give Duke’s history some sense of coherency combined with the overly convenient handling of his abilities and plans continues with the way this story interacts with the ongoing Gotham worldbuilding. Cassandra Cain is listed as “one half of the Batgirls,” but that is incredibly confusing given how DC refuses to spell out its plans for any of the three active Batgirl characters. Is “Batgirls” Cass and Babs? Cass and Steph? All three? The recent online rage about the new costume for Barbara Gordon in Nightwing indicates that DC’s lack of clarity with their plans for this property is not helping fans be excited about their books. Another element that rankles is the way the other We Are Robin characters appear in this story – either marginalized and unappealing, like Izzy, outright villainous, like Riko and Dax, or depressed and suicidal, like the rest. Though I can also understand the desire to create relationship tension for Duke, showing them this way really hurts for fans of the We Are Robin series. All in all, despite a lot of really exciting ideas and clear passion by the creative team, Batman Secret Files: The Signal #1 combines those positive qualities with decision after decision which weakens their ultimate execution.

The art by Christian Duce and colors by Luis Guerrero is clean-lined and appealing, taking advantage of the daytime setting to really show a side of Gotham we don’t see too often – the sunny, morning bustle of the city. The frustration of trying to portray the inconsistent powers of the Signal does take a bit of a toll, and characters’ costumes vary from panel to panel (for example, Cass’ Bat symbol going from an outline to a solid fill between pages). Ken Lashley’s main cover shows a powerful looking Signal with the sun rising behind him, while Batman and The Signal artist Cully Hamner provides the cardstock variant with a similar composition, with Batman (or possibly Cassandra Cain, though that seems a bit unlikely given the way DC’s been trying to position Signal as Batman’s agent of the day) perched far behind Duke in the sunny sky.

As DC continues to try to sell a direction for Duke Thomas with overstuffed, under-prepared stories, intriguing and exciting ideas are combined with frustrating failures.