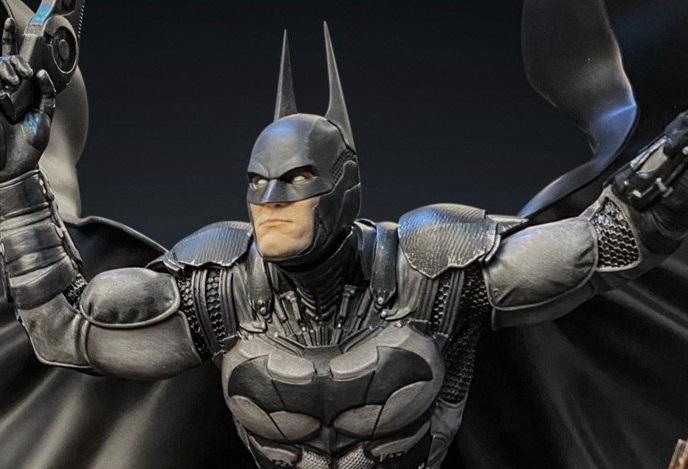 Silver Fox Collectibles (SFX) has released details for their latest statue, which features Batman from Batman: Arkham Knight in a one-eight scale.  The statue measures about nineteen inches tall and features two interchangeable heads and an additional left hand. It is priced at $499.99 and is expected to ship in early 2021. You can preorder the statue directly at Silver Fox Collectibles or at Sideshow Collectibles.

Silver Fox is honored & delighted to announce a new license with Warner Bros, for some of the worlds best known Video Games Series; Arkham City, Arkham Asylum, This is our first statue in the series 1/8 Scale Batman Arkham Knight Statue:

“I’m going to show The Arkham Knight what happens when he messes with my city.”

Batman Arkham Knight. The Dark Knight must defend the city that he had sworn to protect when all of his deadliest foes unite to destroy him on Halloween Night with Scarecrow leading the group of rogues. However, while dealing with Scarecrow’s plan with the help of his allies, Batman must battle the mysterious “Arkham Knight” who seemed to have an unknown connection with the Caped Crusader. Keep up to date on the developments of this series……

Batman stands an awesome 50cm tall and is 62cm wide, with an exclusive base that has been beautifully sculpted with so many details. Comes with a Mini Print from Artist Leo Colapietro and an Authenticity Card…

This statue will be made of high-quality polystone resin and each one will be Hand Painted and limited to 750 pieces worldwide.