The Hole in Things: A History of Simon Hurt (Part Two) 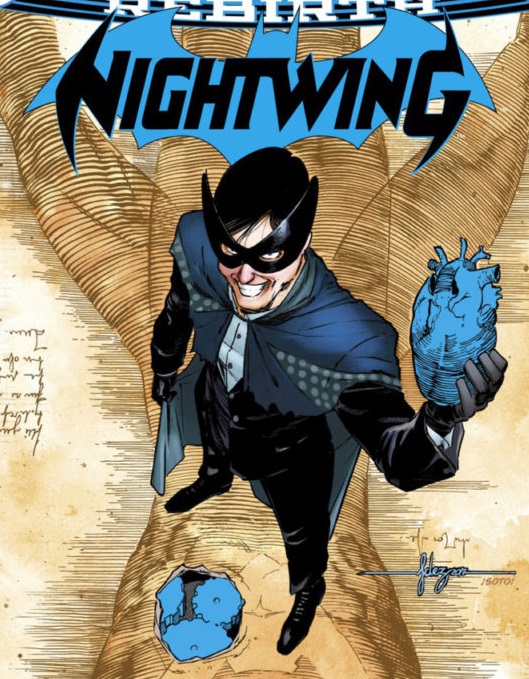 Who knew that Simon Hurt—a creation of Grant Morrison’s spawned from a single unnamed character that appeared in a single comic way back in 1963—would become the quintessential Batman villain forty-five years later? Hurt has sporadically plagued the Bat-Family for nearly a decade’s worth of comics, and now has made his dramatic return in the pages of Nightwing. In celebration of Hurt’s evil return, our chronological examination of the publication and narrative history of the character continues (check out part one here). Hurt—actually Batman’s immortal relative, born in the 1730s—initially only engaged with Batman during the Dark Knight’s amnesiac exile through time courtesy of Darkseid’s Omega Sanction. Decades on in-story time later, Hurt initiates a slow burn that will ultimately bring the Caped Crusader to the brink of destruction. Having secretly planted a post-hypnotic trigger word in Batman’s mind, clouded Batman’s memories, and trained three Substitute Batmen for years, Hurt’s scheme is going according to plan.

In “Commissioner Gordon Walks a Beat” (Detective Comics #121, 1947), Gordon is demoted and replaced by Chief Inspector Vane. Morrison chose to canonize this story for the Modern Age, allowing for a time where Hurt could continue his plans with Gordon out of the way. As referenced in both Batman #674 and Azrael: Death’s Dark Knight, while Vane is in charge, Hurt sics Branca, Lane, and Muller (the Substitute Batmen) on Batman, but the Dark Knight is able to defeat them. Gordon is then re-instated. Hurt, unhappy with his substitute Batmen, remains hidden. He decides they, like the real Batman, must be driven by rage and sorrow in order to be effective. Thus begins a campaign of brutal torture that shapes the three men until their return in a few years. Due to the previous post-hypnotic suggestion implanted into Batman’s head by Hurt, Batman’s memory of battling the substitute Batmen is erased, although he does record the fight into his Black Casebook, listing it as a hallucination/nightmare about “three ghost Batmen.”

Years pass before Hurt is ready to strike again—shortly after “Batman and Son” (Batman #655-658). Morrison’s run on Batman began with seeds planted in the pages of 52, but officially started with “Batman and Son.” Not only does Talia drop their son Damian into Batman’s lap, but Hurt also re-unleashes the first two Substitute Batmen, Muller (aka “Bat-Cop”)—in Batman #655—and Branca (“Bat-Bane”)—in Batman #665. Muller and Branca are both now royally screwed-up thanks to years of torture. Batman still can’t recall his memories surrounding Hurt, but the pieces start to fall into place. The Black Casebook, after all, holds a hazy record of “ghost Batmen.” The Hurt arc continues with Morrison’s Batman #667-669, which featured, you guessed it, more backstory re-engineering. This time Morrison played in the sandbox that included the “Club of Heroes,” international vigilantes, inspired by Batman, that joined together to form a proto-Justice League in the Golden Age. There were Chief Man-of-the-Bats and Little Raven in 1954’s Batman #86; Wingman in 1951’s Batman #65; Knight and the Squire in 1950’s Batman #62; several heroes in 1954’s Detective Comics #215; and John Mayhew, the philanthropist that brought them together as a team, in World’s Finest Comics #89, 1957. Morrison canonized this Golden Age material by having Mayhew invite these “Club of Heroes” members to a reunion on a private island. Of course, not long after arrival does the Hurt-induced terror begin. A video shows a mystery man (Hurt) wearing the bloody ripped-off face of actor Mangrove Pierce, Marsha Lamarr’s ex-husband. Hurt explains that the Black Glove is responsible for their predicament, before murders start happening. After defeating Black Glove agent John Mayhew and getting off the island, Batman now knows the name of his foes, but he is still quite in the dark as to who they are.

Hurt’s arc continues with Morrison’s Batman #672-674. The third and final Substitute Batman (Michael Lane aka “Bat-Devil”) returns to fight the GCPD and Batman. During the battle, the Dark Knight suffers a heart attack and passes out, viewing various spastic visions, which include Bat-Mite, the Hyper-Adapter, the words “Zur-En-Arrh,” Joe Chill, and Thogal (a cleansing ritual that Bruce underwent during 52). When Batman awakes, Lane rants about Hurt’s substitute program. Batman remembers Hurt’s name, but is distressed to learn that it had been repressed from his memory. Officer Farelli—a cop connected to Hurt’s original Batmen program—spills the beans to Gordon. In the basement of the GCPD HQ, Batman defeats Lane in combat. A Venom-pumped Branca smashes in, but he is immediately shot dead by Farelli. In the tumult, Lane escapes. This leads us to Morrison’s “Batman RIP” (Batman #676-681), in which Hurt recruits arch-enemies of the “Club of Heroes” into the Black Glove. Bruce’s girlfriend Jezebel Jet (secretly a Black Glove member, although Bruce knows this and is playing dumb) psychologically preps him for a big fall. Hurt’s henchmen dose Batman with a chemical, making him more susceptible to the decade-and-a-half-old trigger phrase. Bruce tries to link John Mayhew with Hurt and the Black Glove, but all he can find is an old movie entitled The Black Glove starring Pierce and directed by Mayhew. Hurt smears the Wayne family, leaking info and faked photos to the press, showing that Thomas and Martha were heroin addicts that cheated on each other constantly. In the Batcave, Hurt finally strikes in person. The plan, concocted so long ago, which began with a seemingly harmless sensory deprivation test, comes to fruition. Bruce turns to view the Bat-computer and his post-hypnotic trigger word, “Zur-En-Arrh,” appears. Bruce goes into convulsions. Alfred is beaten to a pulp. Hurt injects Bruce with heroin and crystal meth, dumping him on the street. Nightwing is drugged and incarcerated at Arkham. In one fell swoop, Hurt has eliminated the heroes. The eccentric villain dons Thomas Wayne’s old masquerade-ball bat-costume and sips champagne on his new throne inside the Batcave. (In the Golden and Silver Age, when Bruce is a boy, his dad wears a bat-costume to a masquerade that injured gangster Lew Moxon crashes—as seen in Detective Comics #235 and The Untold Legend of the Batman, respectively. In this Moxon flashback, Bruce’s father saves Moxon, but immediately sells him out to the cops, an act that leads to the hiring of Joe Chill. You know the rest of that story. In the Modern Age, Thomas wears the bat-costume at a masquerade prior to Bruce’s birth. At this masquerade, Thomas punches-out jerk-off Colonel Brass—as seen via flashback from the Legends of the Dark Knight arc entitled “Siege”.) Intoxicated and suffering from memory loss, Bruce stumbles through Gotham. He sews together a patchwork red and purple Batman-suit, announcing that he is the “Batman of Zur-En-Arrh!” Bruce has slipped into his self-implanted fail-safe backup identity, which exists as a preventative measure against Hurt’s post-hypnotic trigger word. Batman is always prepared for any inevitability. Duh, he’s Batman. At Arkham, the Black Glove’s “Danse Macabre”—their annual game of life and death (which we’ve seen before on Mayhew’s island)—begins. Hurt promises a duel between Broken Batman and Joker. We finally meet the “Five Fingers” of the Black Glove, rich international diplomats, who have come to bet on the proceedings. The loony but extremely violent Batman of Zur-En-Arrh is defeated by Joker. Bruce is knocked unconscious, dressed up in his correct Batman colors, and buried alive. But Batman and Nightwing break free from their respective prisons. Across town, Robin and the Club of Heroes clean up swarms of Black Glove henchmen. Batman then fights Hurt one-on-one, which results in a helicopter crash. Hurt goes missing and is presumed dead. Joker is re-incarcerated, but vows to kill the remaining Fingers of the Black Glove for using him as a puppet. Talia’s ninja man-bats decapitate a fleeing Jezebel. Gordon, with exonerating info, proves that the traducement against the Waynes was a false conspiracy. When we next pick up the Hurt saga in our final installment of “The Hole in Things: A History of Simon Hurt,” Final Crisis will have happened, meaning Bruce will be stuck in time thanks to Darkseid’s Omega Sanction. The whole world will mistakenly believe Bruce is dead. Hurt will become the problem of a new Batman: Dick Grayson.