The Hole in Things: A History of Simon Hurt (Part One) 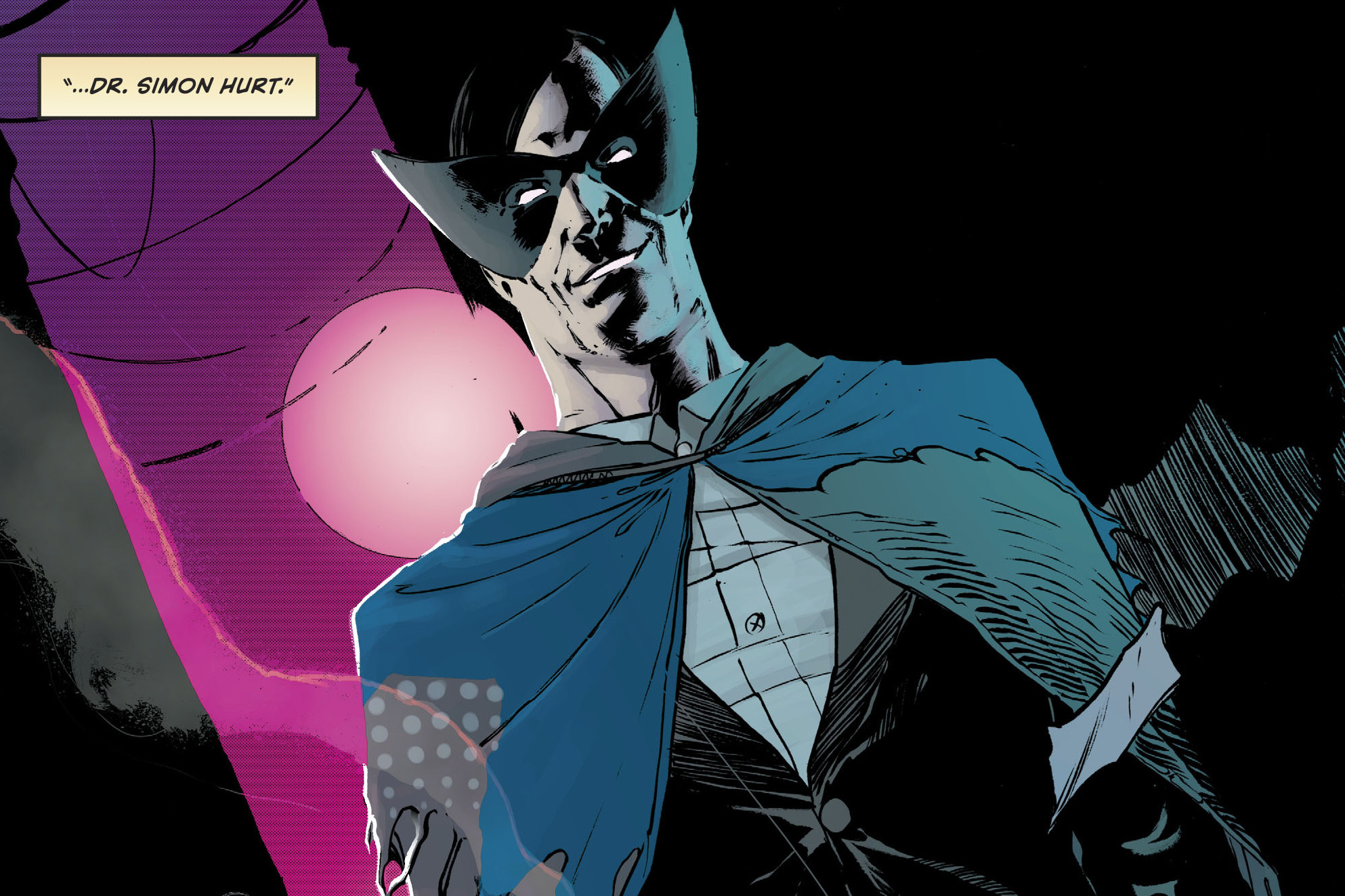 In the latest issues of Nightwing, a ghoul has returned to haunt Dick: the diabolical Dr. Simon Hurt. Throughout most of Grant Morrison’s epic Batman run, Hurt was the Big Bad, a foe the likes of which the Batman Family had never encountered—someone so vile that Batman questioned whether or not he could be the devil himself. But who is Hurt? That was the question weighing heavily upon readers in the late 2000s as the enigmatic new villain took Batman’s world by storm. However, it turned out that this villain was anything but “new.”

Hurt “debuted” in Morrison’s Batman #673 (June 2008), but his origins are much more complex than that. Technically, Hurt first appeared in “Robin Dies At Dawn” (Batman #156, June 1963)—sort of. A key part of Morrison’s Batman run was folding-in elements of Batman’s Golden and Silver Age history into mainstream continuity. This has long been a common practice among creators, but, for Morrison, bringing in these elements was more than just a wink and a nod, some Easter Egg, or off-handed reference. Morrison masterfully re-contextualized and back-engineered older stories, giving them connection to the Modern Age and providing instant narrative ramifications. And at the center it all was “The Hole in Things”: Hurt.

In 1963’s “Robin Dies At Dawn,” Batman volunteers to be a part of a military study involving sensory deprivation tests overseen by an unnamed scientist. Morrison’s concept was “What if this scientist was more than he let on—what if he was an evil of unparalleled proportion that had a link to Bruce Wayne?” Originally, this scientist affably guided Batman back from a hallucination that saw Robin killed on another planet. Then we never saw him again. However, in 2008, Morrison gave the scientist a name: Simon Hurt. Over the course of his run, Morrison would reveal the truth surrounding this ostensibly innocuous second-tier character—that Hurt had been lurking in the shadows for quite a long time.

In Morrison’s recontextualized version of “Robin Dies at Dawn,” Hurt hears about Batman’s drugged-out hallucinations, including the one where Robin dies and also one in which Batman believes he has traveled to the planet of Zur-En-Arrh (taken directly from “Batman – Superman of Planet X,” Batman #113, 1958). Here is where the story diverges from the 1963 version of “Robin Dies at Dawn.” Having bore witness to Batman’s nightmares, Hurt shows his villainous nature, implanting the trigger word “Zur-En-Arrh” into Batman’s brain. Once this word is uttered, Bruce will “shut down” and lose all memory of being a crime-fighter. Following his sensory-deprivation tests, Batman has blackouts, forgetting he ever met Hurt thanks to hypnosis. During this period, Hurt begins training three replacement Batmen; Josef Muller, Michael Lane, and Branca. Hurt then spends years secretly studying the psychology of Batman. Morrison’s historicism also led to the reveal that many of Batman’s early adventures were clouded by a drug-induced haze due to the effects of poisoning from Joker, Scarecrow, and others. Why were those salad days so strange and dare-I-say campy? Joker Juice is a hell of a drug, man. Morrison’s development of Hurt wasn’t done yet. Hurt’s motivations had to be revealed. And who was he really? Let’s take a look at Hurt’s backstory before moving on further with his post-hypnotic suggestion scheme. First, we must go back to the 1700s. Believe it or not, Hurt is actually Bruce’s great (x5) uncle, Thomas Wayne, a crazed occultist and black sheep of the Wayne family, born in the 1730s. Hurt’s history begins with another Morrison-revised Batman arc from yesteryear, the excellent “Dark Knight, Dark City” (Batman #452-454, 1990) by Peter Milligan and Kieron Dwyer, in which Riddler tricks Batman into performing occult rituals in an attempt to summon the demon Barbatos. Originally, Milligan scripted a flashback to 1765 where several prominent figures, including Thomas Jefferson, engage in a summoning ritual. Morrison—via flashback from Batman & Robin #16—retroactively added Hurt to this gathering. While the summoning fails, Hurt comes into contact with a bat-creature (which he mistakes for Barbatos). The bat endows him with extended life/immortality. This bat is the Hyper-Adapter falling backward through time following its defeat in The Return of Bruce Wayne—but we’ll get to that later. We next see Hurt in the late 1800s—as detailed in Batman: The Return of Bruce Wayne #4 by Grant Morrison and Georges Jeanty. As a result of Darkseid’s Omega Sanction in Morrison’s Final Crisis, Batman has been sent into the past, forced to fight his way through time to return to present day. Unfortunately, Batman had lost his memories and was also being stalked by a deadly creature called the Hyper-Adapter. Hurt’s narrative crosses-over with time-displaced Batman’s narrative in the late 19th century, where cowboy Batman takes on the trio of Vandal Savage, Jonah Hex, and Hurt. Both Savage and Hurt want the secret power that supposedly lies within an old artifact—a small bat-symbol casket in the possession of Bruce’s ancestors, the Van Derm family. (The mini bat-symbol casket functions solely as Morrison’s McGuffin over a long portion of his run on Batman. In fact, Bruce invented it as a red herring, which Hurt will painstakingly chase for centuries.) Catherine Van Derm is tortured by Hurt in an attempt to obtain the secret method of opening the casket. Eventually, Savage and Hurt flee with Catherine and the casket in tow. Batman winds up saving Catherine and introduces her to Alan Wayne in a very Back to the Future-type moment. Hurt later appears shortly after Bruce is born, coming into Thomas and Martha’s life. Unsure of whether he is truly family and/or insane, Martha takes the wayward Hurt into their lives after hearing details of his life and believing him to have been unnaturally corrupted. The Waynes come to believe some of Hurt’s story when he reveals to them the room hidden beneath the Manor. (The implication here is that Hurt and the Black Glove have long used this room for their rituals.) However, unable to help their supposed relative, Hurt (who Thomas and Martha refer to as “Thomas Wayne Jr”) gets confined to Willowwood Asylum before later disappearing. The details of Hurt’s interactions with Martha and Thomas Wayne are referenced in Batman #701, Batman & Robin #15-16, and Batman: The Return of Bruce Wayne #4-6.

We next see Hurt shortly after Thomas and Martha Wayne are killed, as detailed in Batman: The Return of Bruce Wayne #5 by Grant Morrison, Ryan Sook, and Pere Perez, which acts as an introduction to the Black Glove. Here we see the power Hurt wields. Posing as Thomas Wayne, Hurt has done (and continues to do) damage to the reputation of the Wayne family name, especially in the eyes of Betsy Kane, who believes Thomas of being involved in drug-abuse, rape, and devil-worship—things that are definitely Hurt’s MO. Hurt gets rid of Bruce’s grandfather Roderick Kane, putting the would-be meddler into a permanent iron lung. What better way to further the smear campaign upon the deceased Waynes than to film them at an occult ritual? With actress Marsha Lamarr playing the role of Martha and the time-displaced Bruce playing his own dad, the ritual begins. In attendance are Hurt, John Mayhew, Carter Nichols, Commissioner Loeb, and Mayor Jessup. Hurt tries to sacrifice Bruce, but Nichols betrays the group, allowing Bruce to escape into the future. It is because of Nichols’ betrayal that the visionary scientist becomes doomed to obscurity—for Nichols, a fate worse than death. We see this reduced Nichols in Morrison’s Batman #700. Of course, Nichols himself was a re-occurring character in the Golden and Silver Age, responsible for many of Batman’s time traveling adventures. When we continue with Part Two of this examination of the narrative and publication history of Simon Hurt, we’ll pick up where we left-off above, with the beginning moves of Hurt’s post-hypnosis long-con. There’s a lot more grandfathering-in of old stories by Morrison to come as well.