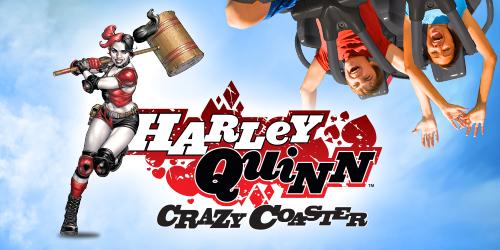 Starting off in Arlington, Texas, Six Flags Over Texas will debut Harley Quinn Spinsanity. This ride will spin riders in three different directions at the same time. The ride will be located in the Gotham City section of the park next to the Joker roller coaster and plans to open in spring 2018.

Next is a ride with the same name, but different thrills. Harley Quinn Spinsanity will also be coming to Six Flags New England as a different type of ride. The ride will still be spinning riders, but will also be swinging them up to speeds of 70mph. This ride will be located next the the recently opened Joker free fly coaster in the Main Street Plaza area of the park. The ride is also expected to open in spring 2018.

Finally, Harley Quinn will also be getting a roller coaster. Called Harley Quinn Crazy Coaster, the attraction will open in spring 2018 at Six Flags Discovery Kingdom. The coaster will take riders in a figure eight patter multiple times as another train of riders will appear to be facing off against them at the same time. The ride will be located near the Joker and Superman rides.

And while those are the only rides related to the Batman Universe, Wonder Woman and Cyborg will both be getting rides at various parks throughout the continent as well. For the full list of new rides check out Six Flags’ announcement.

So what do you think of the new rides? Excited to ride some of them if you are in the area?