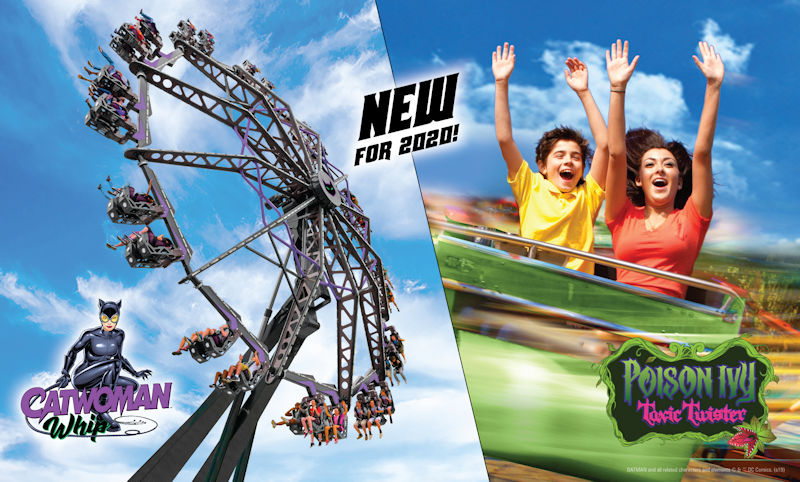 It is that time of the year when Six Flags announces all of the new attractions coming to their parks for next season. If you are unfamiliar with the name, Six Flags is a company that owns and operates a number of regional amusement and water parks throughout the United States. Looking over their current locations, they have locations in almost every region in the country. For an extended amount of time, Warner Bros. owned a part of the business and because of that, they licensed their characters to be used within the parks. This includes all of the DC Universe characters.

Over the past few years, a number of new attractions themed around characters from the DC Universe have been announced. For the 2018 season, three Harley Quinn rides were announced at various locations, For the 2019 season, a Batman-themed roller coaster was announced alongside a Joker attraction. This is just the last couple of years. There are a number of attractions themed around characters from the Batman Universe all over the country.

That brings us to this year’s announcements. For the 2020 season, four new rides will be coming to specific locations. Starting with Six Flags Over Georgia, the park will see two new additions. Catwoman Whip and Poison Ivy Toxic Twister. Both rides seem to be being rethemed for an all-new Gotham City area.

Meanwhile, over in Six Flags St. Louis, Catwoman Whip will also be the name of a new attraction very different from the ride named the same in Georgia. This ride seems to be a new original ride based on the video released featuring concept models rather than actual footage. So this ride could be the first of its kind in a Six Flags park.

Finally, Six Flags America in Maryland will add Harley Quinn Spinsanity to their lineup. This ride seems to be a rethemed version of the Joker Wild Card ride announced last year for Six Flags Fiesta Texas.

All of these attractions will open during next season. And just in case you are looking for more DC Universe attractions, Six Flags also announced Supergirl Sky Flyer for Six Flags New England and a first of its kind water roller coaster called Aquaman: Power Wave at Six Flags Over Texas.