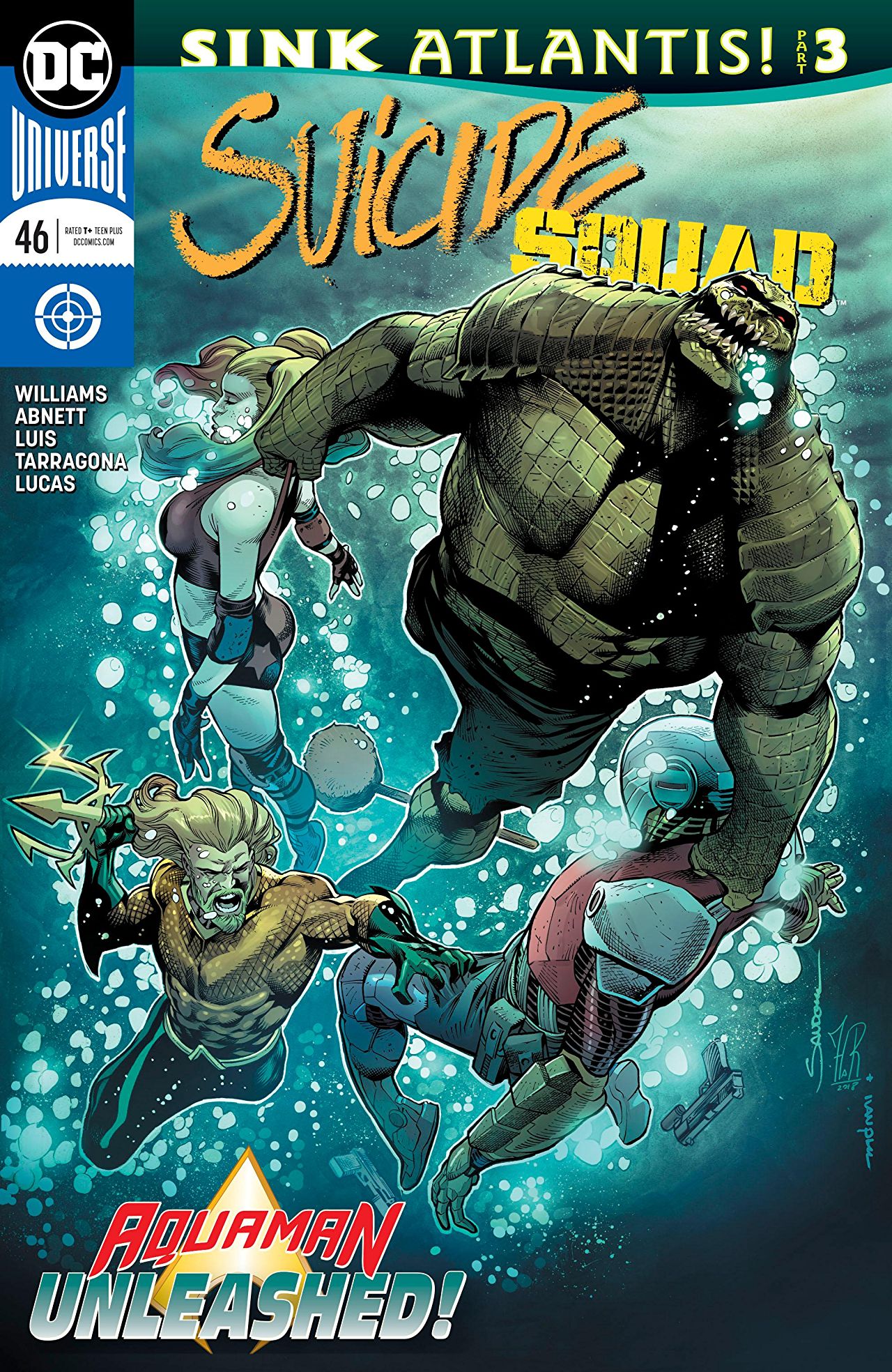 Overview: Control of Task Force X is up for grabs! Beneath the waves, one team member makes a grab for power, one team leader tries to stop Armageddon and on the surface, Amanda Waller tries to sort the true players from the political sneaks.

Synopsis (spoilers ahead): Part three of the Aquaman/Suicide Squad crossover picks up the threads neatly with Harley Quinn and Deadshot captured, attempting to warn the Atlantean leadership about the true nature of Task Force X’s mission. Rather than simply trying to send Atlantis back under the waves, Lord Satanis has taken control of the remainder of the Squad and plans to detonate a nuclear device that will wipe Atlantis off any map, be it on the surface or the sea floor!

Meanwhile, Aquaman seeks the help of none other than King Shark himself. While the two were previously allies, King Shark has quickly returned to his old ways as a leader of the underwater underworld. Nevertheless, King Shark is in no rush to see Atlantis destroyed and the two once again establish an uneasy pact.

On the surface, the president’s advisor, General Meddinghouse, tries to convince Amanda Waller of the need to destroy Atlantis, and though she feels she has been taken advantage of she reports that Task Force X is still ready to carry out their destructive mission.

Meanwhile, the remainder of the Squad now led by Lord Satanis, with Master Jailer, Killer Croc, and the Atlantean defector Urcell continue to move into place. But there is dissent among the ranks; Urcell, who still counts herself as an Atlantean Patriot, chief among them. She never would have led the Squad this far if she had known about the plan to destroy Atlantis, she simply wants to see Atlantis separated from the surface dwellers. There are other dissenting voices such as Master Jailer, who simply wanted to make enough money to support his family and had no intentions of committing mass genocide. He notices that ironically, he has finally joined a crew where his moral standards set the high bar.

Satanis is bound and determined to carry out the plan. His command of the dark magical arts gives him the power advantage for the moment, so the rest of the Squad is forced to follow him. Gaining entry into the Silent School, where the detonation will have the most impact, Urcell pleads with Satanis once more not to go through with the nuclear detonation. She reveals that within the School, some of Atlantis’ most valuable magical artifacts are stored. He could take whatever he wishes, just don’t destroy Atlantis. He responds by grabbing an artifact, a magical spear, and with one thrust, Urcell’s cries are silenced and she sinks to the depths.

At that exact moment, Aquaman arrives on the scene with King Shark and his gang. If ever there would be a response to Task Force X’s mission, this is it. But within the magical vault of the Silent School, Lord Satanis has already gained too much power. The pure strength of King Shark and Aquaman are no longer enough to set him off his task. Satanis lowers a magical barrier around Aquaman and his team of Atlantean muscle. Deadshot, given the power to detonate the implanted explosives in the heads of each Suicide Squad member, tries playing that card. But the dampening of the magical vault combined with Lord Satanis’ recent leveling up is too much for the technology to overcome. Only Dolphin remains free of the magical barrier. As her tears mix with the already salty ocean water, she swims away determined to stop Lord Satanis even if she must pay with her life.

On the surface, Queen Mera meets with an ambassador from the United States government. In a deft political maneuver, she wraps the ambassador in a lie, revealing that she is aware of the plans to destroy her nation. But the ambassador is perplexed and assures her that the American president had no part in ordering the nuclear strike. But Mera is not swayed. With the Atlantean military at her disposal, she informs the ambassador that the sea-faring equivalent of a nuclear strike is poised at the ready should she set it in motion. The two nations are now on a path to mutually assured destruction!

Analysis: In the third chapter, this bizarre crossover has really delivered the goods! This is achieved by having several solid elements at play. There is a good cross-section of action-packed sequences, another new team with some familiar faces rounding out the veteran core of Task Force X, political intrigue across the scope of the DC Universe and some unexpected surprises and faced that come from putting the Suicide Squad up against Aquaman and the denizens of Atlantis that come into play with this unique pairing of books. We continue to see the development of Deadshot as a leader but also as a character more likely to come down on the side of virtue. Harley is a little underused here but it’s easy for her to eat up a lot of panels unnecessarily and using her in small bursts does this book a service. We also get some espionage and political strata interactions with Amanda Waller and the diplomatic situation that is created by Atlantis surfacing in US waters. The plot allows for just enough mystery in this theater of the operations and the true nature of intentions between the power players here leaves a lot to be deciphered.

The diversity of the characters in play for the main action is also a treat. Having Aquaman and the variety of his secondary teammates interacting with King Shark’s gang makes for some really fun panels. And at the end of the day, it can just be nice to see some different faces when it comes down to the part where everyone punches each other.

Having followed this book for a number of months across a number of arcs, I can also say that Rob Williams and Jose Luis have become an excellent creative team. Here the writing duties are shared with Dan Abnett, but Rob Williams does the final scripting and he’s getting to know these characters quite well. Same goes for Luis’ pencils. He does a pretty convincingly scary Killer Croc and King Shark here is also very imposing. The diverse sea-faring creatures and inhabitants make for some creative backgrounds even in the less action-oriented panels and the whole thing has a cinematic quality that drives the action and plot forward in a very satisfying manner. Whatever your opinion on Suicide Squad in other media or previous incarnations, this creative team is caught an excellent rhythm and tells the story of these characters in a very compelling way.

Final Thoughts: While it seems like an odd match, with very few connecting points other than the fact that Suicide Squad will soon be joined by Aquaman at the box office, this story is a lot of fun and continues to show both the agility of the creative team of Williams and Luis as well as the diversity that can be Task Force X and Suicide Squad as a concept. Unafraid of shakeups and mixing and matching teams to suit the needs of the story, rather than writing stories that are intrinsically tied to the team allows a type of freedom not possible when each issue hinges on the dynamic between, for instance, Harley and Killer Croc. While those two have been staples of the book, the point is that using Suicide Squad as a vehicle for showcasing some names and faces in the DC Universe that aren’t currently making waves (pun intended) gives the writer opportunities to bring us places we aren’t expecting and gives us, the reader, the opportunity to try out something familiar but with a different spin. It’s a win-win scenario, even if Task Force X and Amanda Waller are set up to lose.