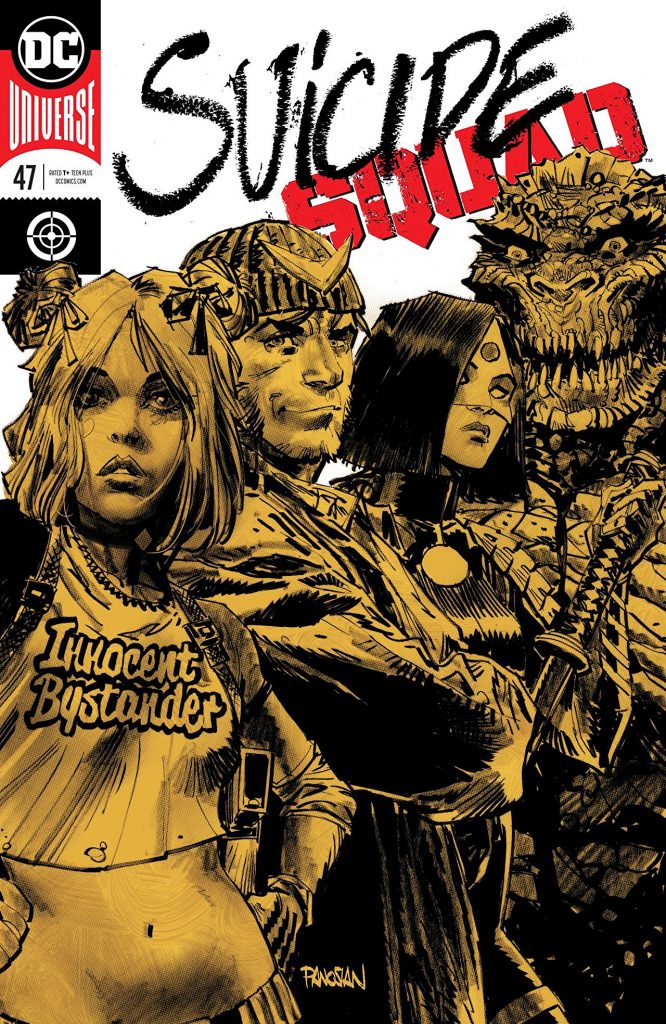 Overview: Would you believe a story about Digger Harkness as a world-class spy for his homeland? That’s right, call him Boomerang, Captain Boomerang. He’s the best there is at what he does. Well, maybe the top five anyway. Let’s take a look at The Ballad of Digger Harkness.

Synopsis (spoilers ahead): If you find the premise of this story tough to stomach, imagine how Amanda Waller feels when she’s actually contacted by, ahem, the Australian Secret Service and asked for a stay of diplomatic immunity for one of the members of Task Force X. It turns out Digger is now and always has been an international super spy. It’s all Waller can do to simply grant the Australian Intelligence agent his request. But not before firmly reminding Digger that his leave from Belle Reve will consist of a strict twenty-four-hour limit. After that, the brain-bomb scenario is back on the table.

We’re introduced to Digger’s former spy service teammate, Mel, who passes the equivalent of the Mission Impossible self-destruct message to Digger via a tall-boy beer, which, once the tab is popped, relays the specifics of his mission. He first must pass a phrase challenge question, consisting of listing various Australian celebrities in the correct order. If nothing else, this provides us with a pretty clear picture of where this story is headed.

During the flight back to Australia, Mel relays more details of the mission. The target is an Australian arms dealer codenamed The Bunyip. We know that “The Bunyip” is an Aussie folk-monster because of earlier narrative cues, plus the two teammates trading stories about how childhood friends claimed to have seen, or alternatively, been eaten, by such a creature. Mel also provides Digger with some on-brand arsenal powerups. But it is at this point that Digger stops to consider whether or not he wants to be part of this operation at all. For one thing, it’s clear that Mel hasn’t done any homework on his former friend who currently responds to the moniker “Captain Boomerang” as he provides him with a caseload of, you guessed it, nothing but boomerangs. Digger has made a pretty decent run at super-villainy, even classified in the Rogues Gallery of a Leaguer. So it occurs to him that maybe putting the brakes on his cushy Task Force X gig just to play the action hero (preferably Chris Hemsworth) for a second-rate spy unit might not be a power move.

This also allows for an origin by way of flashback. We get to find out some of what actually makes Digger who he is. Turns out Digger’s father was a U.S. soldier who ran out on his mother (who doesn’t get the honor of any job title.) Implied is that in a dusty, Outback-adjacent village on the backside of nowhere’s backside, Digger was a straight A student at the school of Hard Knocks. Eventually, he comes around to the idea that while he never really wanted to go home again, while he’s here he might as well kick a little ass.

Using “bad-guy skills” Digger does some web surfing that leads him to “top-secret villain sites, encrypted only for bad lads” and deduces that The Bunyip will be surfacing at a party in Tasmania. Airdropping in, he is met on the beach by a suitably gorgeous female agent of, well, the details are sketchy. But she does her best to hustle him past the prying eyes of the party guests. Unable to catch the drift, Digger opens his fat mouth before realizing that The Bunyip’s appearance here isn’t so much a secret as the main event. Which makes the party-going guests the crème de la crème of Australia’s weapons-dealing proto-organized crime or what passes for such in the current locale.

Undaunted, Digger breaks out the boomerangs. Quick to aid his action-hero-esque bad guy takedown posturing is the gorgeous female agent (aptly named Para Dice.) Several well-placed flying V’s later most of the goons have been handled. But as it turns out, these weapons dealers are fairly well stocked with weapons, and even Digger and Para Dice’s maneuvers can’t take down all the mooks.

Making a dash for the inner sanctum, Digger pumps Ms. Dice for information. She finally reveals that she’s Aussie Secret Service as well, deep cover, of course. She covers Digger with suppressing fire and directs him to the penthouse to finally take down The Bunyip.

But when they got there, the cupboard was bare! The Bunyip seems to have disappeared, alerted to the incoming agents. They find only a blow-up doll with a kangaroo head… and a set of explosives ready to take the doll at face value!

Fortunately, Mel circles back around, pulling Digger out at the last minute. But poor agent Dice, she was still in the building when the Bunyip’s explosives turned it into a blazing inferno. There is simply no way she could have survived the blast…right?

To say that the story folds back on itself a few more times would be an understatement. Even though as a rule I try to include as much of the plot as possible in the synopsis, this is one of those rare stories that really only works once. And putting down every detail here wouldn’t do it justice and could only serve to detract from the experience, should you choose to undertake it. Suffice to say that when Digger finally ends up back in his hometown, it’s not the end of the journey when he encounters Agent Para Dice again.

Facing his one-time ally, Para Dice thanks Digger for finally realizing what this McGuffin of a plan was all about. Of course, Digger doesn’t actually figure out the crux of what’s happening. He’s still more or less letting life happen to him without really participating. And so the self-fulfilling prophecy comes to light. Finally, back in the dead end town that made him, Digger looks about to come to his own dead end. But there’s one more turn to come.

It would make sense if you thought Para Dice was in fact The Bunyip at this point. I admit that was my thought. But we get a bit of a curveball…or maybe a boomerang. Out of the shadows steps a character who hasn’t yet been introduced. This is the real Bunyip, and also… Digger’s son. Huh?

As silly as this sounds (and it is silly) this is actually a really sweet payoff for this issue. Digger’s son gives the expected diatribe about how his brilliance and genius were blocked by the fact that his father was a nitwit who couldn’t even rob a bank in the Flash’s hometown. But there’s no moment of introspection for Digger. Instead, he looks fate in the eye and tells it to stop being such a baby. He realizes that the whole scheme, the weapons dealing (oh, and did I mention Australia was being held for ransom under threat of nuclear Armageddon? No? Well, that’s how much it really matters) everything about this subterfuge can be traced back to the fact that Owen Mercer, Digger’s son, is just throwing a tantrum because he had to grow up without a father. Calling his bluff, with a completely straight face, Digger stomps out the last of Owen’s holier-than-thou-ness and he completely loses his cool.

As explosives are going off all around these three unlikely characters, Digger catches a ride on a Deux Ex Machina away from the blast radius. But something really striking happens here. Digger narrates as he makes his escape, “How could anything good come from a place like this? Is it any wonder I became who I did? I’m a thief. I’m a liar. I’m a murder. I’m Captain Boomerang mate.” And as the last page turns, Digger actually goes back to rescue his erstwhile son and double agent who tried to take him down. “And I don’t come back.”

Analysis: There’s an obvious air of the absurd to this story. It has that flavor of a story that’s not quite real, but not quite outside of continuity. Anyone who has ever read an issue of Deadpool should understand where the boundaries of this weirdness are set. But for all the slapstick, bizarre moments that permeate it, there is a few points of hyperrealism in this story that go deep into Captain Boomerang. Maybe deeper than we’ve ever gone.

And really these are the stories that, when you look back on a writer’s run, often define the arc or even an era. Rob Williams has had a chance to push these characters around the board for a while now, enough that its fair to say he has a feel for who the are and what they represent. He has also created a foundation for these characters of style and execution that can really only be gained after a solid run. It allows him to give us laugh out loud moments with Harley and Boomerang and also silent introspective moments with Deadshot and Waller. It’s an ensemble cast and manipulating all of those pieces isn’t an easy task. Williams has arguably mastered it.

This is a one-off story and it feels like the kind of piece that could be a file story to provide a bumper between arcs. Jose Luis, the artist who has been on board for the majority of the last six issues isn’t in the credits here, but Phillipe Briones does a great job keeping it moving. Many readers won’t even skip a beat with Brionnes’ art here. His style fits the story maybe even a touch better than Luis’ art would, giving it just a touch of charicaturization that the humorous side of the story demands.

What happens in the last four pages of this story actually help validate the last six months of this book, maybe even further, as that’s just the length of time that I’ve been reading. Either way, Williams has been laying groundwork, covering a foundation of true storytelling with humor and misdirect so that when Digger comes face to face with the reality of what he’s wrought in his life his final action doesn’t feel like a crapshoot, it feels like something Williams has been getting ready to show us for a while. Maybe it’s not a file story after all.

Final Thoughts: Suicide Squad is a book with a storied history. The “Say Hello to the Badguy” aesthetic that served it so well in the early days of the New 52 and before were maybe over-extended by the time the movie hit theaters. And the stylized two and a half hour music video we got at that time perhaps didn’t do wonders for the source material. But if you aren’t reading Suicide Squad now because of what came before, what you think you know about it now, you owe it to yourself (not to mention the creators) to go out on a limb next time you hit your LCS and check in with Waller’s Task Force X.