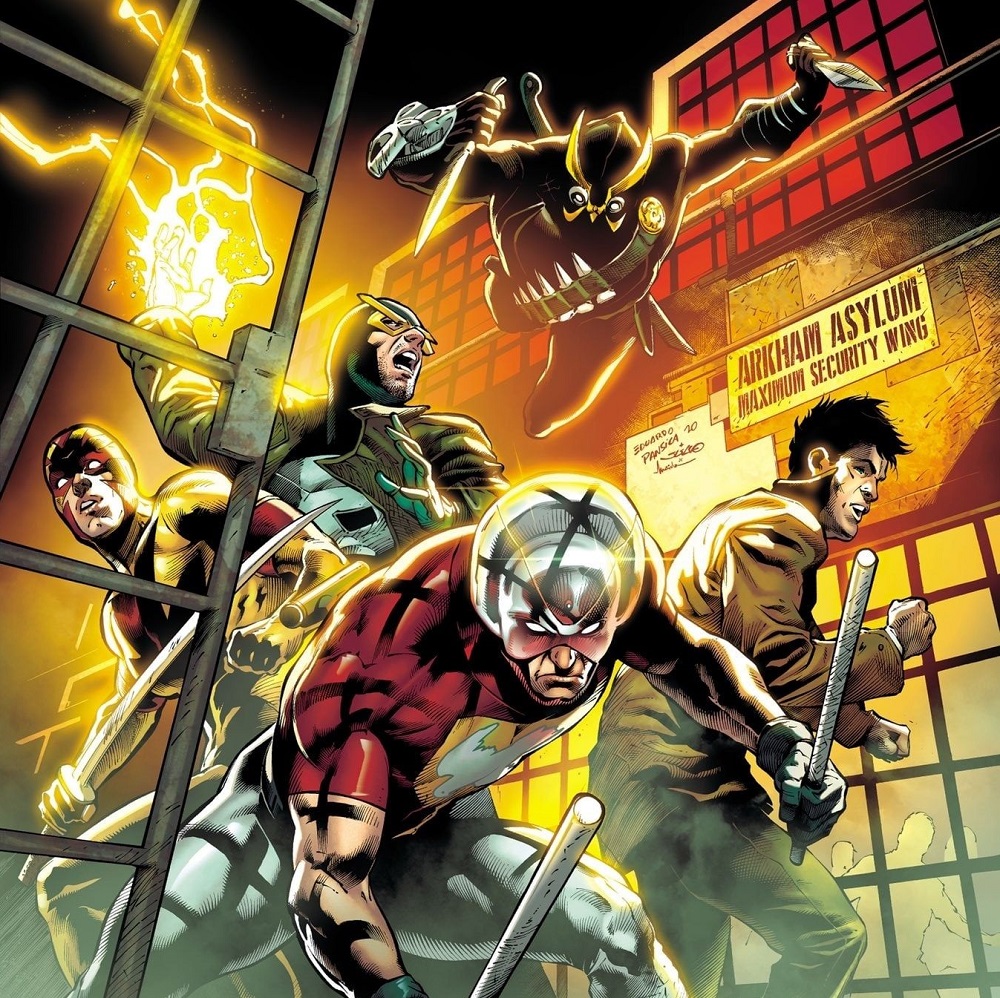 Overview: In Suicide Squad #1, Rick Flagg and Amanda Waller battle over the ethics of a more dangerous Task Force Z, as the new Suicide Squad dispatches its first mission: to break into Arkham Asylum and recruit their newest teammate.

Synopsis (spoilers ahead): Over a backdrop of the various incarnations of Task Force X, Rick Flagg explains to Amanda Waller and the reader the mission statement of what the Suicide Squad was, before revealing to us his displeasure and disgust for her new project: Task Force Z, which he likens to a ‘rival Justice League’ and hints that members could be pulled from the multiverse. Waller retorts that this is necessary because she’s tired of the failures of the past and that it’s far past time to up the ante if they want to make an impact.

At Arkham Asylum, two guards making their rounds are stealthily dispatched by the appearance of our first new Squad member: Peacemaker. He secures the tunnel he was to clear, and radios the rest of the team, consisting of Bolt, Film Freak, and Shrike, who have arrived at their assigned location: the cell of William Cobb, aka Talon. As Peacemaker arrives to join the rest of Task Force Z, Waller explains that the inmate, who seems to be in a state of profound confusion, is to be retrieved before he regains the memory of who he is. Rick Flag attempts to call off the mission, but Waller silences him by remote electrocution before securing him in a cell while the mission proceeds.

At the Asylum, Bolt, who is ready to end this mission, is preparing to grab the ‘parcel’ and head out through the tunnels. He grabs the inmate by the shoulder, which brings Cobb from his confused state and into a muscle-memory mode. In a flash, Cobb slices Bolt’s throat open, brandishing a sharpened toothbrush (which he presumably used to carve a countless amount of ‘Who’s in his cell) in each hand, dons a makeshift Talon cowl and engages the remaining three in combat, which Talon handily has the advantage of. Unfortunately for everyone, Cobb isn’t the only threat, as the cell block begins to fill with Joker toxin. Film Freak, having been tossed down into the deadly gas by Talon, is the first to fall.

Waller, having made sure that Flagg will no longer be a problem, opens a heavy door to introduce us to his new and unwilling replacement. Behind this door, secured by heavy Kryptonite chains, is Conner Kent…Superboy.

Peacemaker and Shrike fight for their literal lives to escape the Joker toxin while also battling Talon and Arkham guards. Peacemaker orders Shrike to clear the hall while he shoulders Talon through the doorway and into safety….and allows the door to shut behind him, abandoning Shrike to the poison. Welcoming Talon to the new Suicide Squad, Peacemaker tells Cobb that it’s time to get to work, as they begin to be flanked by a seemingly insurmountable amount of guards approaching them from several floors below, where they need to escape from.

Analysis: I personally have little knowledge of the previous iterations of the Suicide Squad, outside of the movies (animated and live-action) and the bits necessary to understand their makeup, but this issue does a pretty decent job setting things up.

With this issue, Waller has taken her sights to grander scales, and she doesn’t have the time or the patience to deal with Flagg, the conscience of the operation. She wants total obedience and has now silenced any opposing voice.

This is a straightforward story so far, with it being mostly buildup in this issue. With the exception of Waller and Flagg’s interaction, we don’t get very much as far as characterization or story beats this early in the arc.

Peacemaker seems to be the perfect candidate for her vision. As Flagg states, he loves orders, and so far seems to be her soldier, her perfect right-hand man, putting the mission above all else….including the safety of his team, and apparently without the sanctity of conscience. Understanding that the character will be coming up in related projects outside of comics, I expect him to hang around a while and to be the frontman of Task Force Z.

As for the other members of the team? Bolt was useful inasmuch as he served as transportation for the Squad. Afterward, he dies fairly quickly, and in a way that makes it seem unlikely that he’ll pop back up later on. Shrike seemed to be a somewhat formidable ally, having enough skill with martial arts to be able to take down multiple guards, but we also don’t get very much time with him, as he is left behind to deal with the Joker toxin. Film Freak. Comedic relief? His role seemed to be that of a very short-lived tour guide into Arkham and to Cobb’s cell. Other than that, he offers nothing to speak of. He is also abandoned to the fate of the Joker toxin.

Talon is absolutely a wonderful get for Waller, as his abilities will allow him to be used many times over, as long as she can control this member of the Court of Owls. Given his current mental state, he is bound to be susceptible to Waller’s manipulation. Where did that makeshift mask come from, though? Most of it seems to be from the ripped sheet off of his bed, but where did he get those broken lenses from, and…..why?

I am very curious how Conner’s Superboy will play into the team’s success. Of course, he is more than capable of anything Waller can throw at him, but I suspect it’s only a matter of time before he rebels against her. She must have a pretty sizable ace up her sleeve to put a leash on this one.

The art is pretty house-style, and that’s not an insult. It’s solid. Everything is clear and concise, and we aren’t left questioning or being distracted from the story.

Suicide Squad #1 hits the ground running and is packed with a great amount of action. It's a buildup issue, so we are left with more questions than answers, which isn't a bad thing. However, I didn't get enough time with the characters for their deaths to mean anything to me, and I can't say anyone will be missed. I'm hoping we have more of an opportunity to explore characterization as the series progresses, but with the exception of Conner, I'm not really at the edge of my seat in anticipation.