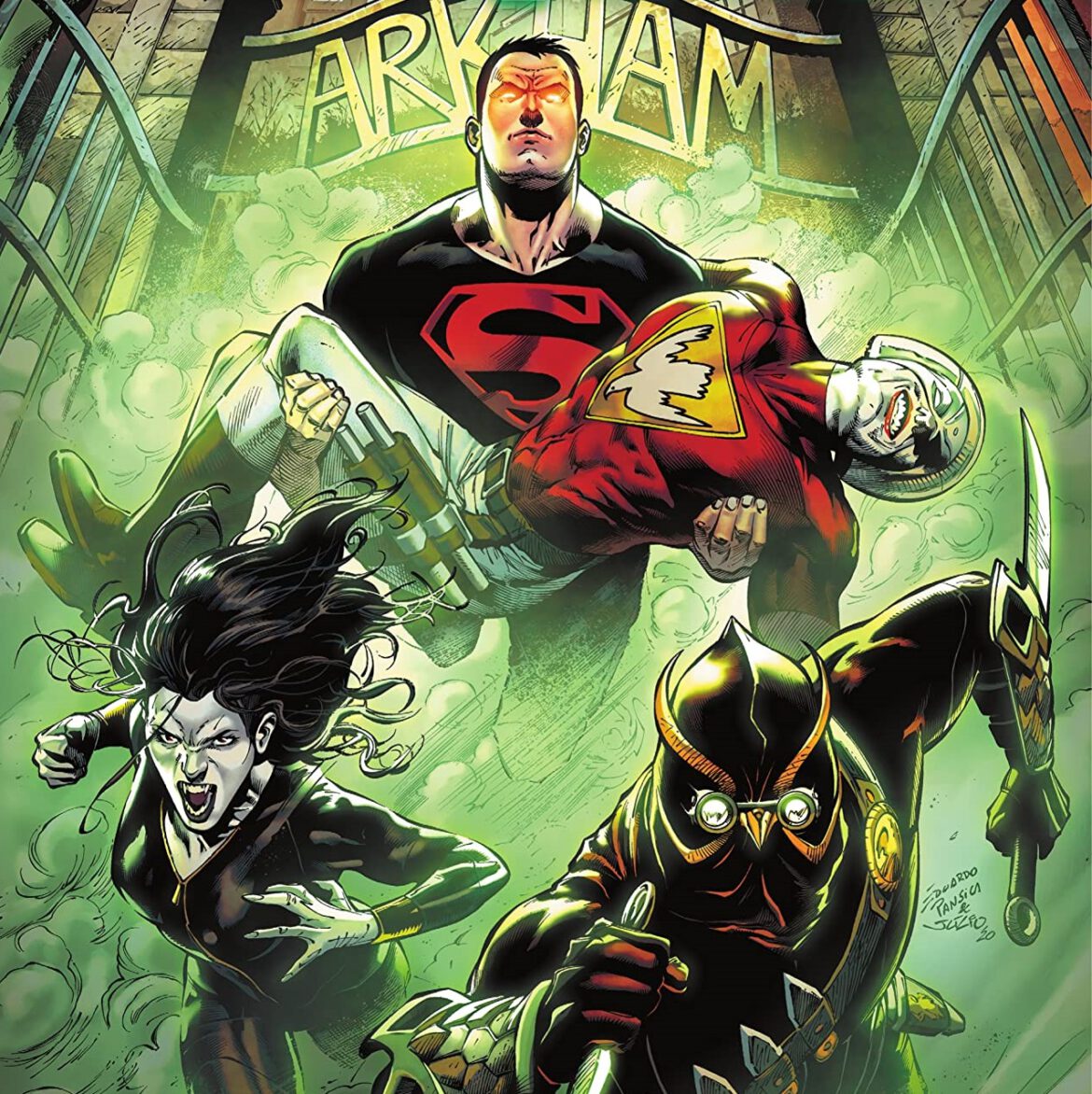 Overview: With a little help from new recruits, Task Force Z’s first mission, to ‘rescue’ Talon from Arkham Asylum on A-Day, is completed in Suicide Squad #2. Waller and Peacemaker struggle to keep Superboy in line, and the object of the next mission is revealed.

Synopsis (spoilers ahead): Suicide Squad #2 kicks of with Peacemaker (Christopher Smith) and Talon (William Cobb) continuing their efforts from the previous issue to escape Arkham, but with the rest of the team dead, an onslaught of attacking guards, and Joker gas rolling in through the rest of the Asylum, the odds are overwhelmingly stacked against them. Peacemaker demands backup from Amanda Waller, and soon the reinforcements arrive in the form of Superboy (Conner Kent), a clone of Superman and Lex Luthor; Mindwarp (Peter Howard), a psychopathic mind-manipulator; Nocturna (Natalia Metternich), a villainous vampire; Culebra (Alejandra Cortez), a super-strong brute; and Exit (Jason Phillips), a thief who can create portals.

Through each of the combined powers of the new team, the battle once again favors Peacemaker and his Suicide Squad. But with more players comes more drama and, as Batman arrives on the scene, Task Force Z begins to fall apart when the mission gets in the way of morals. After Culebra and Exit replace the body in Talon’s cell with a true John Doe, thereby not alerting Asylum security of the loss, they regroup with the rest of the team, still battling the guards amidst the Joker toxin. Superboy and Exit aren’t willing to leave people to die, while the rest of the team scramble to finish the mission and leave. In the melee, both Exit and Mindwarp are exposed to the Joker gas and die. With Superboy proving detrimental to the mission, Waller dispatches him with a Kryptonite shock. Culebra tosses the deadweight bodies of her teammates into the final portal made by Jason Phillips before his exit. Just as the portal closes, Batman enters the Asylum to help disperse the gas (for more on this A-Day attack, see Infinite Frontier #0, Joker #1, and Batman #106).

Back at Belle Reve, headquarters of Task Force Z, Amanda Waller tries to help Cobb along his path to remember his identity by giving him his true Talon mask. Nocturna takes him to his cell while Culebra injects Superboy with an antidote to the Kryptonite. Peacemaker debriefs Waller on the mission and its shortcomings, blaming Superboy. He and Conner then exchange some heated words before Peacemaker takes him down with a single punch, proving he isn’t beneath the Kryptonian clone. With a verbal jab at Waller that no one, not even her, will keep him from peace, he leaves. Waller then turns her eye onto the Suicide Squad’s next mission: a speedster named Alinta from the Teen Titans Academy.

Analysis: Suicide Squad #2 begins with a callback to the first. In the previous issue, we began with a brief synopsis of Rick Flagg’s history and mission with a closeup and storytelling photographs in the background. This issue presents us with the same, but the subject is Peacemaker. A nice transition from the former leader to the new.

We get to see Peacemaker’s Batman-like obsession with completing the mission: not only was he willing to sacrifice himself with the implant than die at the mercilessness of the Joker toxin, he makes a very logical addition to the option in that it would also take down others with him, and furthermore open a hole through which Talon could escape. It wasn’t enough for him to die; his death itself also needed to contribute to his cause.

I was more interested in Mindwarp and Exit than we were given the option for. We see that the portal-creating thief has been willing to take strides to the redemption that was referred to in his introduction, but I would’ve liked a bit more time and clarity with him. Mindwarp is described as a psychopath and sadist, but we don’t really get to see him express these traits. He very practically uses his powers of manipulation to force the guards to forget that the Suicide Squad had arrived and shortly is exposed to Joker gas and dies. He does, however, give the best line in the book so far: ‘Guard, your foot needs a bullet.’

Culebra was every bit annoying with her ‘humor’ as Peacemaker calls her out to be, and I hope she stays around a bit. Her eye-rolling Debbie Downer quips add a certain unwanted character that may eventually be charming.

Oh, I forgot about Nocturna. She was there…being a vampire.

While Peacemaker’s character is forefront, I’m most interested in how the constant attempts to get Superboy to fall in line will play out. I don’t particularly see him playing by the rules of this team that cares so little for the innocent lives at stake, but with Waller’s willingness to kill the squad off with the push of a button, on top of the threat of his own Kryptonite implant, it makes me wonder if he could be broken, after all.

As with the previous issue, the art is well done, although much of it was seen through a thick green haze. I’m looking forward to enjoying the art now that the team has left the A-Day storyline.

Speaking of A-Day, I really enjoy how the book incorporated the various details from the other books in which it was referenced and without being overwhelming. Mahoney and Batman were thrown in, but were not necessary to the book itself.

If you’ve read Teen Titans Academy #1, then you may realize that Alinta is the speedster being referred to at the end of this issue, although her powers aren’t really forefront in her own title. In that book, she receives a call from ‘A.W.’, who we now can assume is Amanda Waller. This means that she knows Waller enough to have her programmed into her own phone and that these two titles are going to be closely linked for the foreseeable future. This is the continuity between titles I’ve been missing for a while!

I liked Suicide Squad #2, but it didn't really keep me on edge. The interactivity with outside events is exciting, but the main story so far has really just left me a bit underwhelmed. I hope we are building up to something that will give us a reason to respect Task Force Z over X, instead of just giving us the same with a different name. We lived through two issues in which the mission was to save a confused enforcer of the Court of Owls, and I hope, as does Nocturna, that we see he was worth it.