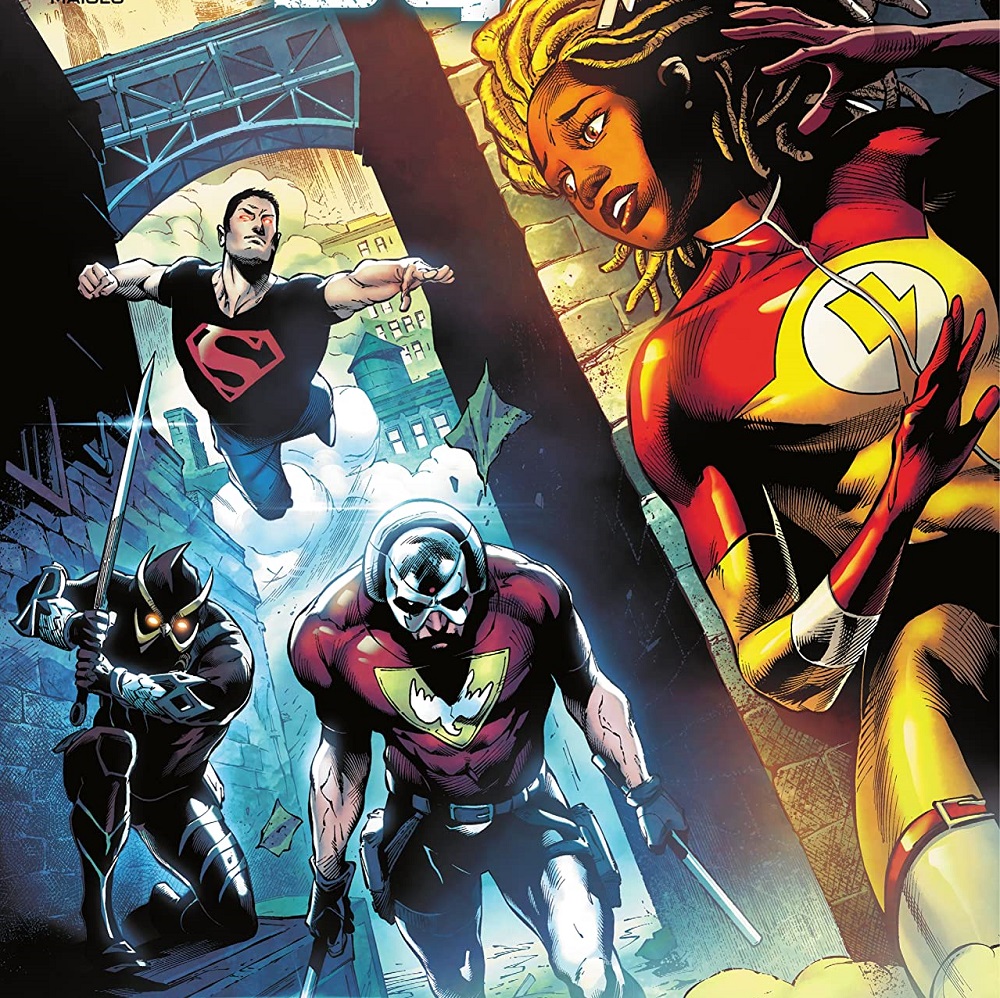 Overview: In Suicide Squad #3, Task Force Z works together (kinda) to collect their next bounty, the speedster Bolt, in a life-or-death race against time!

Synopsis (spoilers ahead): Suicide Squad #3 begins at Belle Reve, with the vampiress Nocturna dishing out all the information she gleaned from Superboy to Amanda Waller after she had used her glamour on him to determine who he was and if he would be reliable as a Squad member in the future. Later, Peacemaker pulls Nocturna to the side and further discovers that something is off about Conner Kent’s ‘readings.’ Nocturna believes that something is wrong with Superboy, while Peacemaker suspects it’s Waller’s doing.

Meanwhile, Amanda Waller tasks Culebra to act as guardian over Talon for their next mission. While the former Court of Owls enforcer is still a needed instrument for her purposes, he still can’t be reliable enough to be manipulated until he regains his memory. Even under strict incarceration, he has been able to kill his guardsmen.

Superboy rejoins the team, recovered from the fiasco from the previous issue. We are also introduced to the newest Task Force Z members: Keymaster, another portal-conjurer, and Branch, a human/plant experiment gone wrong, with the ability to ‘hear’ plants and transmogrify his body to sprout plantlike appendages from his body.

Their mission is to capture Alinta a.k.a. Bolt, the newest speedster, from the clutches of the Teen Titans (as seen in the pages of Teen Titans Academy). While the squad is forbidden to enter Titans Tower, Waller has intel that on this particular evening Bolt will be in the outside world with several other students at the movies. Knowing that Alinta will take a customary run afterward, Culebra is to cause a distraction to attract the speedster’s attention, while Branch lays a tripwire that will cause her to stumble and fall into the portal that Keymaster has made, delivering her safely into Waller’s hands back at Belle Reve. Peacemaker oversees the operation as Superboy and Talon act as backup. Nocturna, meanwhile, scouts Titans Tower.

The plan runs smoothly at first. Bolt is separated from the rest of the group, and Culebra, with her superior strength, creates an impact that alerts Alinta, who runs to investigate.

The plan goes awry, however, when Branch persuades Keymaster to create his portal, not for the mission’s objective, but to get far enough away from Waller’s influence to make an escape. Keymaster does so, with the intention of abandoning the rest of the team, but Waller detonates his implant before he can do so. Not only does this kill him, but also sets the tripwire meant for Bolt into flames. Alinta arrives on the scene, and upon seeing the rest of the team, realizes the trap had been set up by Waller. Alinta escapes back to the confines of Titans Tower.

Peacemaker readies the group to march onto Titans Tower when they are approached by a new threat, or a new ally: Red X. This story will continue in Teen Titans Academy #3.

Analysis: We are three issues in now, and I’d say that the missions so far have been rather catastrophic. While the object of the first mission to capture Talon was a success, the plan itself fell apart quickly, and the fallout didn’t exactly bring everyone together. This second mission in Suicide Squad #3 has, so far, been a complete failure, and now at least two outsiders know of their presence and objective.

This leads me to wonder why Peacemaker seems so nonchalant about the consequences of the actions of the team under his leadership, but entitled enough to confront Waller in such an impetuous manner. He has already threatened her and, with his plan to move ahead onto Titans Tower without authorization, undermined her. He has shown a boldness in circumvention by altering the frequencies of the laundry room in full view of the monitoring equipment. In this issue, he promises Nocturna that he will take care of the team, presumably not just from mission dangers but also from Amanda Waller, because ‘that’s what leaders do.’ Yet by my count, no fewer than five Task Force Z members have died under his watch and while he was present, at least one of which he knowingly abandoned to death in no uncertain terms. Again, this is only Suicide Squad #3, and they’re on their second mission. Unless Smith has found a way to bypass the implants, I don’t see his ego being justified. Culebra interrupts the laundry room talk with a message from the boss VERY shortly after it begins, showing that Waller doesn’t just have the ability to always watch them, but is always watching them.

Conner Kent, at least, shows much more wisdom in playing the game. Already having suffered the consequences of going against orders, he subtly tells Alinta to run while playing at trying to capture her. Unlike Peacemaker, he knows he’s stuck and is forced to dismantle Waller a bit more quietly.

We get a bit more time with Nocturna this issue, and although I’m not terribly familiar with the character, she seems much more subdued than in the handful of times I’ve come across her in previous readings. A constant death threat carried under your skin is sure to be quite a tight leash on your manners, to be sure, but she seems far more resigned to her fate than I would’ve expected this cruel vampiress to be.

Culebra is still my favorite, despite her humor being grating and the impression I get that she’s somewhat of a sycophant to Waller. She seems to be a character who would work as a Suicide Squad member regardless of whether she had the implant or not. I think she enjoys being part of a team and uses her personality to butter Amanda up.

Keymaster never thought to use his teleport ability until Branch suggested it? Hmm.

The plan of the mission was hilariously simple and absolutely should have worked. I was expecting something a bit more elaborate and dramatic by an elite team called the Suicide Squad, but luring this young rookie into a portal via tripwire was very efficient.

This book isn't terrible, and it certainly isn't boring. There is a quick pace to it, quite a bit of action, and the tension of an ever-present threat. But there's a suspension of belief I feel I'm supposed to buy into on Peacemaker's part that just doesn't seem pragmatic. The idea that anyone who understands the situation they're placed in can not only listen to Christopher Smith, but also TRUST him, is faulty at best.