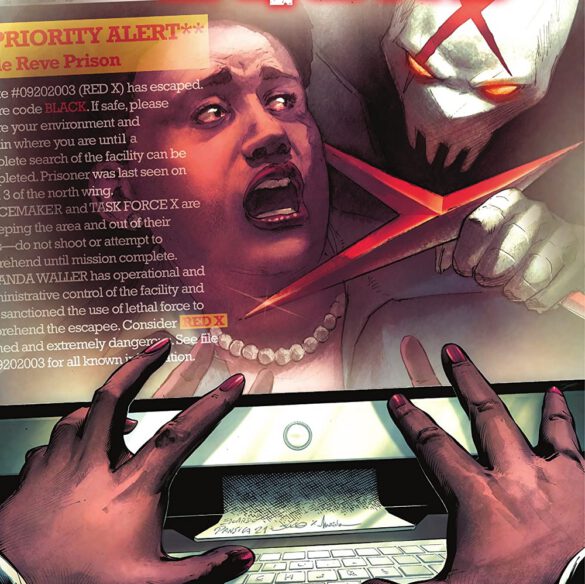 Overview: In Suicide Squad #4, Red X has been captured, but Amanda Waller and Task Force Z soon find themselves outmatched by the mysterious stranger.

Synopsis (spoilers ahead): If you start Suicide Squad #4 and feel lost, you can get the most well-rounded details of the story in our review of Teen Titans Academy #3. In Belle Reve, Peacekeeper finally oversteps his privilege with Amanda Waller when, after a heated confrontation over the debriefing of the events at the Teen Titans Academy and the acquisition of Red X, Waller activates his shock collar and has him thrown into his cell.

Peacemaker isn’t quite ready for bed though and, after dispatching his jailers, orders the rest of the Suicide Squad to meet him in the laundry room, which still acts as their de facto secret headquarters from the prying ears of Waller, if not from her eyes. There, he begins to bring his team together by narrowing in on their shared unease with Waller’s lies and manipulation.

Meanwhile, Waller attempts to begin her psychological breakdown of Red X, eager to get her new toy out into the field as perhaps the most powerful weapon yet. Despite an increasing number of electrical shocks, Red X keeps his wits about him and manages to keep himself at least one step ahead of her. Soon enough, he reveals how much of a threat he truly is to Belle Reve, and, through the advanced tech inside his helmet, he opens the cell doors of the prison, and within seconds the prisoners begin to wreak havoc.

While Task Force Z attempts to regain order, Red X escapes his own cell and begins to make his way to Waller’s office, where she had safely been monitoring him using a holographic image of herself. On his way, X collects everyone’s implant frequencies and taunts the Squad, doling out bits of private information to prove his superiority over them.

With a strong kick to Peacemaker’s gut, Red X crashes into Waller’s office, where he finally meets her face to face. Threatened, Waller informs him that the room is filled with explosives. Red X counters that not only did he know this but that he’s already detonated one.

Red X makes his escape amidst the physical explosion of Waller’s office, as well as the deeper cut of the more important failures; the defeat of her team, and the escape of Rick Flag.

Analysis: Red X is the first real threat that Amanda Waller and Task Force Z have experienced in this series, and his imprint has proven detrimental. As Waller herself states early on in Suicide Squad #4, Red X is a ‘Batman-level intellect,’ and he certainly backs it up here. He is nearly omniscient, proving that he not only can withstand what Belle Reve can throw at him, but is more than capable of being a few steps ahead as well.

I liked that, in a figurative sense, he unmasked the Suicide Squad. Literally and figuratively, he tore through everyone’s defenses. He knows what Waller did to Superboy to make him so vulnerable; that Talon has been faking his mental condition and is perfectly aware of his surroundings; that Culebra’s sycophantic attitude towards Waller is because her mother is being kept safe; that Peacemaker’s desire for an order has been what keeps his role under Waller at bay.

When X breaks from his prison cell and breaks the illusion that Waller was standing there with him, he says that he wasn’t going to leave until they had a talk ‘face to face,’ which I was eager for. However, when the issue culminates and he literally kicks the door down to get to her, their exchange amounts to little more than knowing about explosives in her room. That was a missed opportunity to further inspire a tangible fear in her that could make a discernible impact on her psyche, which earlier he had been proficient in using against the Suicide Squad.

Red X has been the most interesting thing to happen to this book. We were able to enjoy an issue that dealt far less with team in-fighting and got to see them work together, for a time, against a truly formidable foe. The art is detailed and wonderful in its depiction, adding a much-needed shine to a story that seems to be progressing at a plodding pace.

This issue, while more entertaining, doesn't seem to add any substance to the bigger picture of the arc. I find myself still confused as to the story's direction and questioning the importance and place of the title in the overall universe it's set in.