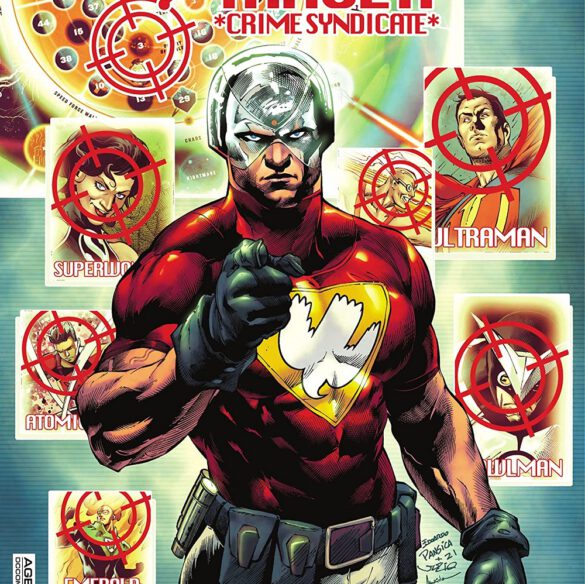 Overview: In Suicide Squad #5, a new arc and a new member of Task Force Z are introduced with Bloodsport, whose mission has brought him to Earth-3 and into the clutches of the Crime Syndicate. Meanwhile, the rest of the Suicide Squad has been locked down since the encounter with Red X, but with the sudden discovery of the whereabouts of Swamp Thing, the team is getting back to work.

Synopsis (spoilers ahead): As Suicide Squad #5 begins, we learn the origin story of Robert Dubois, Bloodsport, who took on this persona after his brother Mickey had died in combat. After having fought Superman, he has now been forcibly enlisted into the Suicide Squad. His powerset includes proficiency in every method of combat, as well as the ability to teleport weapons. He’s been spending his time on solo missions for Waller, traveling to the multiversal Earths, gathering intelligence, and recruiting members for the Task Force.

He is currently scouting Earth-3 and soon comes upon its unique residents: the Crime Syndicate. Having already a stock of counterparts in the Squad, Bloodsport decides that Black Siren, the Earth-3 counterpart to Black Canary, would be the best fit as a recruit on this outing.

Back at Belle Reve, Waller receives a report that things are quiet within the prison walls after the last issue’s fiasco with Red X and the escape of Rick Flag. Security has been tightened, and there should be no more dampened spots that Waller won’t be able to spy upon, including Peacemaker’s laundry room hideout.

Waller is summoned to a lab, where she’s informed that Swamp Thing has been located, and she immediately puts Task Force Z onto his trail.

On Earth-3, before ensnaring Black Siren, Bloodsport takes the time, as he has on every Earth, to check in on the area’s counterpart of his brother Mickey. The recon doesn’t last, however, as a nearby Starro attack distracts him. Bloodsport uses them to his advantage, however, to wear down his prey. After a small battle, he seems to be ready to bring her in, but is interrupted by Ultraman, who doesn’t appreciate his presence on his Earth. Dubois urgently begs Waller for ‘the big gun’; a gun that emits a gaseous cloud of Kryptonite. Ultraman, however, isn’t weakened by Superman’s poison, but is strengthened by it. Removing Bloodsport’s bomb implant, Ultraman overpowers him and takes him out.

Analysis: Bloodsport with a first-page introduction in Suicide Squad #5 is already far more interesting than the figurehead of Task Force Z, Peacemaker. Robert Dubois loved war games since he was a child, but when the time came to put his money where his mouth was, so to speak, he dodged the draft. Instead, his younger brother Michael not only enlisted, but died playing the war hero. This combination of guilts drove him to be the obsessive villain he is today.

He expresses that he works best alone. Likely, he’s the kind of man that likes to play by his own rules, and not those laid down by his peers or his ‘betters’. In Peacemaker, this attitude is one of over-confident cockiness with a clear vision to his goals, but with Bloodsport we may have a little more depth to consider. His previous cowardice at dodging the draft has the stigma of making him unreliable to an extent. He is well-trained, and having the ability to teleport weaponry certainly makes him a force to be reckoned with, but if these qualities are threatened or taken away, who knows what actions he may take if things turn desperate?

On the other hand, the death of his brother was truly traumatic, especially if he blames himself for the events leading up to Mickey’s death. This might cause him to falter in the case of a direct order to abandon someone he may bond with. This overcompensation makes him a greater danger to himself in the long run under the wrong circumstances.

We see some evidence of this with his clandestine visits to his counterpart family on each Earth he visits. While not taken advantage of in Suicide Squad #5, that is a particularly big weakness to be exploited.

Ultraman removed the bomb from Bloodsport in their battle, presumably thinking it was a threat to himself and his own Earth. But with the one true string to Waller’s mission severed, Robert Dubois, if he can escape the Crime Syndicate, has an opportunity to run. He’s on a totally different Earth, with a better version of what his life could be, and understandably, a fairly large certainty that Waller would be unable (and unwilling) to track him down.

With most of the focus being on the premiere of Bloodsport, there is little else to speak of. We have the promise of a search for the new Swamp Thing, which Amanda Waller jumps right into. Knowing what Swamp Thing is, it’s pretty obvious that in either case, her ambitions are much larger than her (and the Squad’s) capabilities. Swamp Thing is far more than a mere physical force to be dealt with, and a Superman who thrives on Kryptonite would be pretty much impossible for the Task Force to reckon with.

Given the title of the arc (Earth-3), and the tag at the end indicating so, it appears the Suicide Squad will be venturing over in order to assist Bloodsport. I don’t really see Task Force Z as a true threat to the Crime Syndicate, and would rather see how Bloodsport himself handles the situation, while Peacemaker and company take on Swamp Thing. I also would really like to see Bloodsport attempt a disappearing act from the Suicide Squad, now that his bomb is inactive. Given a second chance with his ‘brother’, this could make for a really powerful storyline.

While not being particularly spectacular, the introduction of Bloodsport as a future sort of foil for Peacemaker can be interesting. Bloodsport’s love for war blends pretty well with Peacemaker’s violent desire for whatever his concept is of peace. The writing is pretty tight even if the plot itself seems very run-of-the-mill, and the artwork is wonderful in its consistency and detail.