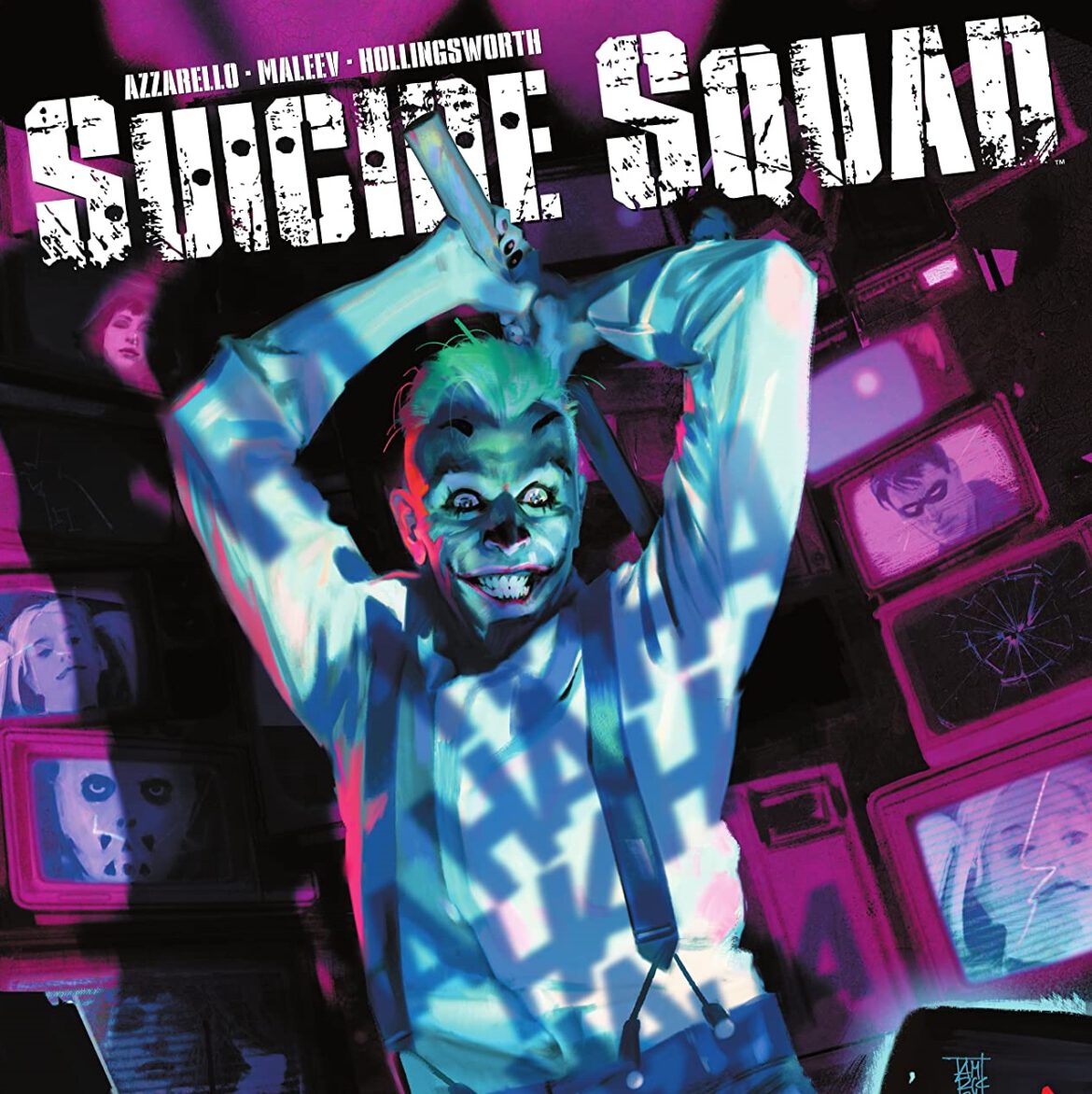 Synopsis (spoilers ahead): Suicide Squad: Get Joker #1 opens with a brief recap of the life and death and life of Jason Todd.  He is now in prison after being apprehended by the cops while in his Red Hood persona.  Prison is not kind to Jason, he gets into fights and eventually gets transferred to Belle Reve in Louisiana.  Yes, it is that Belle Reve.

Amanda Waller pays Jason a visit.  She wants him to lead a Suicide Squad team to kill his killer, the Joker. Amanda shows Jason that she knows his past by saying that he was dead and that he was the Boy Wonder.   Jason declines but soon changes his mind.  He asks who will be on his team.

This team will consist of various characters, many I actually have not seen before. Jason along with Waller and an assistant named Larry go to meet his team.  Jason will lead Firefly, Silver Banshee, and Plastique, all of which I have seen before.  In addition Pebbles, a man experimented on by the government, Meow Meow, a necrotic, the vigilante Wild Dog and a teleporter named Yonder Man.  This last group is new to me but Jason seems to recognize Wild Dog.  Rounding out the team is the Joker’s ex, Harley Quinn.

The team approaches a copter that will take them to Gotham and their local contact.  Larry injects Jason with the bomb that will keep him under Waller’s thumb.  Waller explains that she has a box with a button that she will press if any member of the team strays from the mission, the result will make them not recognizable as their body burns itself.

On the way to Gotham, Wild Dog talks about the attack on the Capital, crossing over to real world event from this past January.  He was there and arrested for his part in the insurrection.  Their chatter is interrupted by the call that the drop zone is approaching.  The team arrives at Gotham City Motor and the team is attacked by a vehicle without a driver.   Before the team could destroy this problem a bear comes up and tells Otto, the truck to sit.  They are met by Winslow, the Toyman.  Toyman is their contact.

Toyman, in an ice cream truck, drives the team to an illegal gambling parlor they believe Joker to be at.  Outside Red Hood rally’s the team to move in with caution but Harley is not with them.  She already has gone in.  She approaches a clown sitting at a table and pulls her gun to the man’s head.  The other patrons in turn draw their guns on her.  The rest of the squad enters the room with weapons at the ready.  Harley soon learns that the man she has at gunpoint is not the Joker but a man with a green wig and his mouth is stitched closed.  She blows off his head and the firefight erupts.  The Metas go into action, mainly Silver Banshee and we learn why Meow Meow wears a mask over her mouth.   Yonder Man teleports to get Harley and Plastique covers the squad as they escape.

The team leaves the area and Red Hood contacts Waller.  Jason discovers that they are dealing with more here than he was aware of.  The Russians are involved and that complicates things, making this an international situation.  Jason thinks that there is a leak on the inside.  One member of the team cannot be trusted and he asks Waller about this.  Waller does not know but she reveals that she is not in Louisiana anymore.  She is also in Gotham and she has ordered pizza.  Unfortunately, Joker is the delivery driver.  He attacks Waller and Jason realizes that it is the Joker and there is nothing he can do.   Jason returns to tell the team that Joker has the box.  Firefly is the first to burn up thanks to Joker’s finger.  The Suicide Squad is in trouble.

Analysis: Suicide Squad: Get Joker #1 is under DC’s Black Label imprint and it is appropriate.  The violence here is definitely over the top especially the death of Firefly.  Usually, it is said that the Suicide Squad has bombs on them but this is more than a bomb; it is an incendiary device.  Firefly literally melts in front of the squad.  The other example is Harley killing the man she believed to be Joker.  Not only was his mouth stitched shut but she literally blows a hole through his head.  I do wonder why the language is masked by the symbols like in the main comic imprint until the end when the language is directly being used.

Jason’s characterization is exactly how I expect him to be.  He is pragmatic and on the mission.  The interesting thing about this depiction of Jason is his appearance.  Waller does not give him his red helmet but instead, he is given a domino mask.  His costume also looks like a Robin costume.  It is possible that this is Waller’s way of reminding him that she knows exactly who he is.

I believe that Yonder Man, Pebbles, and Meow Meow are new characters while Wild Dog is a returning if not an often-used character. I do find it interesting that Brian Azzarello decided to link Wild Dog with the Capital insurrection of January 6, 2001.  I believe this detail will date this story making it linked to this time and not transcending time.

Overall, this is an interesting tale, giving callbacks to Suicide Squad from 2016 and sending this team to kill Joker.  Joker as usual proves to be intelligent even though he is governed by chaos and he is already several steps ahead of the squad.

Suicide Squad: Get Joker #1 is an entertaining read that harkens to the Suicide Squad film from 2016 making this accessible to readers who may not be overly familiar with Task Force X and the characters.