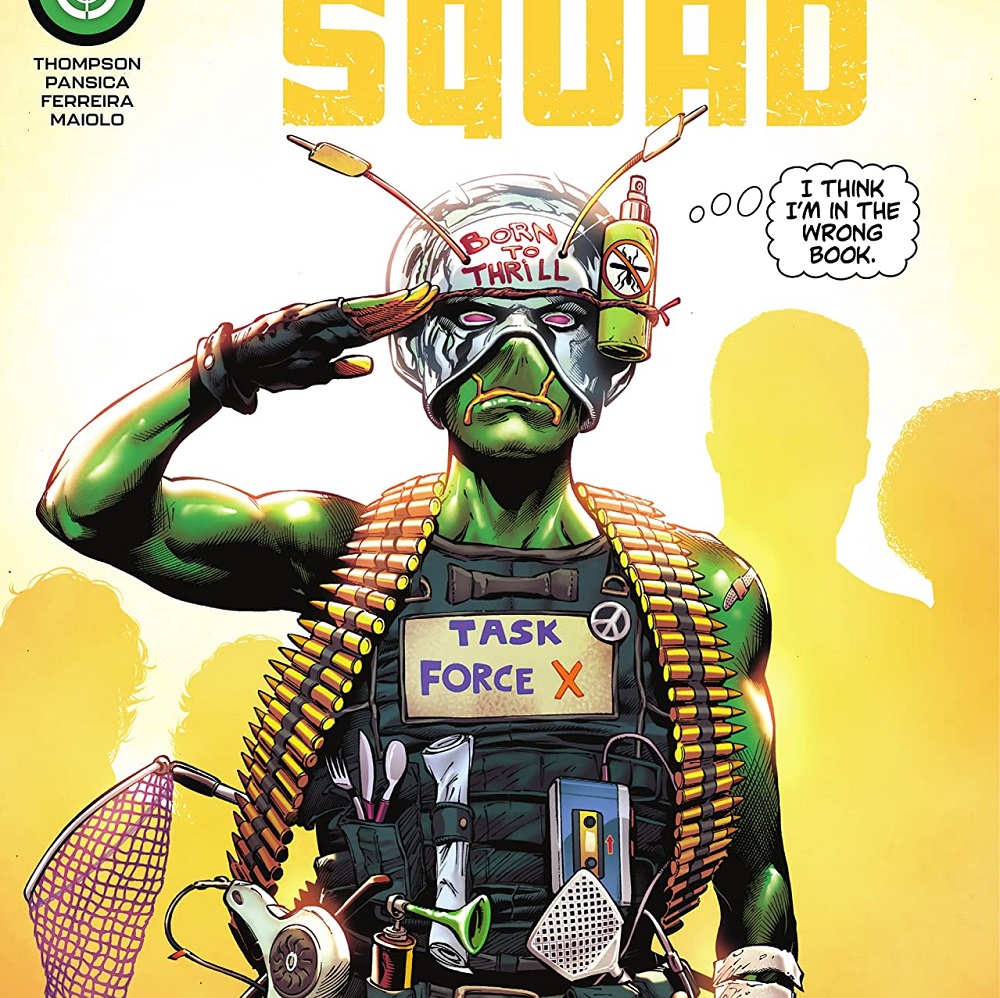 Overview: In Suicide Squad #7, Amanda Waller brings in Ambush Bug and prods her Task Force into their newest mission: to storm Hell and steal the Rock of Eternity.

Synopsis (spoilers ahead): In a fourth-wall-breaking scene as Suicide Squad #7 begins, we are introduced to the newest member of Task Force X, Ambush Bug, who introduces the reader to what the Suicide Squad is and also a shortened exposition on what happened in Suicide Squad 2021 Annual #1, wherein the Suicide Squad’s Superboy was revealed to not be Superboy, but his clone, Match. Ambush Bug is then introduced to several members of Task Force X; Bloodsport, Nocturna, Culebra, and Black Siren (the Black Canary of Earth-3, who was abducted from her planet in the previous issue). Ambush Bug then breaks THEIR fourth wall by revealing to them that they aren’t getting to know each other on a beach but are actually in a simulation run by Waller, in a black site prison far out of the reach of Belle Reve.

Overseeing their simulation, Amanda Waller asks Dr. Rodriguez about their progress. They need to be ready for their next mission, which is apparently to break into Hell.

Not everyone on the team is ready, yet. Match, still reeling over the revelation that he’s not Superboy, is less than focused or enthusiastic when Waller approaches him, and Talon is in the infirmary for teleportation sickness, which Waller confronts him on, suspecting he’s faking. In previous issues, it was revealed that Talon has been faking his mental shortcomings, but Waller doesn’t seem to know or suspect this even larger deception.

Waller checks in on Peacemaker, who has been absent the past few issues (appearing, however, in the Swamp Thing title) on a mission taking him from his team and into the Green to capture Swamp Thing. Peacemaker is having a difficult time with his task and resents not being back at Belle Reve.

Back at the simulation, Ambush Bug reveals that Waller’s mind-control doesn’t stop with Match and drops another revelation: Nocturna isn’t from this Earth. Before she has a chance to process this information, though, they are attacked in the simulation. The simul-demons are easily put down, thanks in part to Match’s appearance. With their teamwork in sync and the demons put down, Amanda Waller reveals herself and debriefs them on their next mission into Hell. They are to retrieve the Rock of Eternity.

The Suicide Squad is shortly transported into Hell and is instantly beset upon by demons. Match quickly assumes control of the situation and begins to put plans into place, but Bloodsport takes umbrage, and the two get into a debate over leadership qualifications. As this is happening, however, the rest of the team has been rounded up, and once the two are able to concentrate on the task at hand, we learn that they have been captured by the Hell Squad, formed of former Task Force X members with an agenda of vengeance against Amanda Waller.

Analysis: Amanda Waller wastes no time in plunging the Task Force into their next mission, characteristically unsympathetic to their needs to adapt to their physical and psychological situations.

Match, injected with the serum that allows him to return to his formerly intelligible self, is able to work through enough of his betrayal to regain his moral spirit to not just rejoin the team and lead the Task Force, but also to be the understanding friend that Nocturna needs when her own revelation is crashed upon her. This heroism is shown to be the core trait that Match possesses as his true self, and if he can carry this over without the help of the serum, he can truly edify himself as the Superman he so aspires to be.

Nocturna, formerly sure of herself and rather comfortable in her surroundings, is now shaken to the core. Unlike Match’s situation in needing to deal with being yet another clone, Nocturna now finds herself to be a foreigner not just in an alien land, but an alien planet.

Two team members find themselves in a lie, and this, understandably, throws the rest of the Squad into a similar confusion. And how can Amanda Waller expect the Task Force to act in any cohesive manner when her lies are so deeply deceptive that, when revealed, causes the entire world to fall apart in her employees’ eyes?

Ambush Bug adds comedic support that, if used well, can bring levity to the book that Culebra’s humor doesn’t add to. However, the focus on him in Suicide Squad #7 felt a bit heavy, when the trauma that Match and Nocturna are freshly experiencing is in no way relieved by it.

Though the simulation is a training technique Waller uses, it does a service to the team as a therapeutic exercise as well, that Waller could take advantage of as a team builder if only she could loosen her control just enough to realize how damaging it is.

Ambush Bug is a fun addition to the team, but it feels like the deeper stories around Match and the rest of the Squad have taken a bit of a back seat to him. As Task Force X travels deeper into Hell, however, it is hoped that the team will be able to come together enough to find the better side of their situation and to formulate a plan to escape the one Waller has planned in her long con.