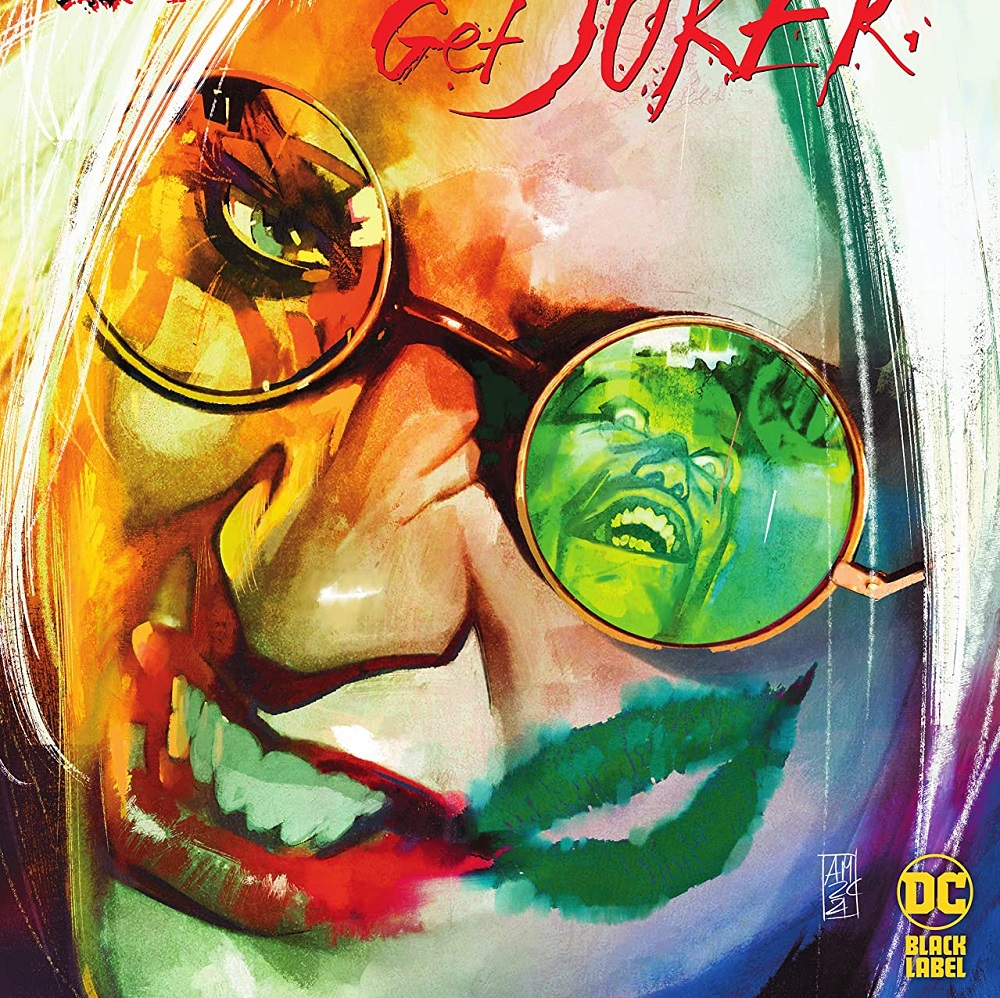 Overview: In Suicide Squad: Get Joker #2, the Squad retreats to plan their next move while Joker invites them to a party.  They are either gatecrashers or the Calvary has or has not arrived.

Synopsis (spoilers ahead): As Suicide Squad: Get Joker #2 begins, Joker is on the phone with Red Hood.  He is talking about needing help and he is asking Task Force X for this help?  The squad is confused but they are still alive, except for Firefly.

Red Hood checks in with Larry.  Soon a crowd arrives at the beach and the Squad leaves and heads back to Gotham City Motor.  Toyman analyzes the compound Waller injected Jason with.  It is composed of nanotechnology and a mutagen in one.  Their nervous systems carry a dormant phosphorous spike protein that is activated by the nanotechnology.  The only way to remove it is to perform a lobotomy, not an option.  Jason smells something.  The other squad members get to know each other a little better.  Outside Plastique is with Pebbles and Yonder.  They are talking about Yonder’s powers and it looks like Pebbles and Yonder are vaping pot.  It is the pot that Jason smells.  Yonder says that is needed for his powers and Pebbles is not affected by cannabis, while Plastique says that she likes the smell.  Jason walks off.

Elsewhere, Silver Banshee comes across Meow Meow.  Meow is eating ants.  Banshee tells her that that is strange and the other woman walks off.  Banshee follows her and Meow Meow tells her that she ended up in Belle Reve for prostitution.  Some Johns have weird kinks.  Banshee tells Meow that she is not bad but she does have a temper.  The two admit to killing people.  Meow does wonder that if given different circumstances could she have been a hero, Banshee does not think that she could have been.

Jason goes back inside to talk with Harley and Mad Dog.  Everyone, including Joker, seems to be waiting.  Meow and Banshee join with the others while Pebbles and Yonder play a game of basketball.  Soon they see a crowd outside the yard’s fence.  Pebbles calls Jason.  These people are here to invite the squad to a party thrown by their boss Joker.  One of the goons passes an invite through the fence which Plastique blows up and the goon draws on her while Meow Meow forces the guy to drop his gun by grabbing his arm with her tongue.  Jason calls for order telling them that some of his associates are ungracious and he agrees to go to the party.

The team arrives at the strip club where the party is and Toyman is told to stay outside in the truck.  The others go in and they are received of their weapons.  Joker has not arrived yet so the others decide to party.  Mad Dog in particular shows an interest in the strippers.  Jason muses at what Joker’s plan is and Joker arrives.  Joker steps over to Jason and tells him that it is killing him not to kill him again which is interesting given that he could do it anytime with the box.  Harley joins the conversation.  Joker tells her to go on stage and dance.  Jason tries to stop her but she agrees.  Plastique berates Jason for allowing Harley to dance and Mad Dog is enjoying the show.  Jason says that Harley is taking one for the team and she comes down to a sitting Joker.  She starts to give him a lap dance and while he is unsuspecting she uses a blade she has hidden in her teeth to stab the clown in the throat.  This starts a fight between the squad and Joker’s men.  Yonder teleports to steal the box from Joker as the firefight erupts.   He escapes outside and approaches Toyman, who attacks him snapping his neck.  The others run out of the club and Toyman attacks Pebbles.  Banshee attacks and Toyman blows up, he is a robot.    Banshee is quickly attacked and it is revealed that seven other members of the Suicide Squad have arrived.  Why are they here?

Analysis: Suicide Squad: Get Joker #2 was a slow and confusing issue.  The opening sequence of Joker taking to Jason on the phone does not make sense to me.  What is Joker drowning on about?  After that sequence, the story really does not seem to make sense to me until they arrive at the motor yard.  The discussions among the squad members are interesting and it does provide some pathos for several members of the team especially Meow Meow.  I personally hate that name, I wish she had a better name.  I like the character, just not her name.

The art here is okay, not fantastic but it conveys what it is supposed to show.  I do like the gritty style of the drawing and the colors especially when they are in the strip club.  It definitely feels like a seedy mud hole and that is definitely what is depicted.

This is a confusing chapter and now we have more characters to add for the last part.  Is this going to become a Squad versus Squad story with the A-Team versus the B-Team?