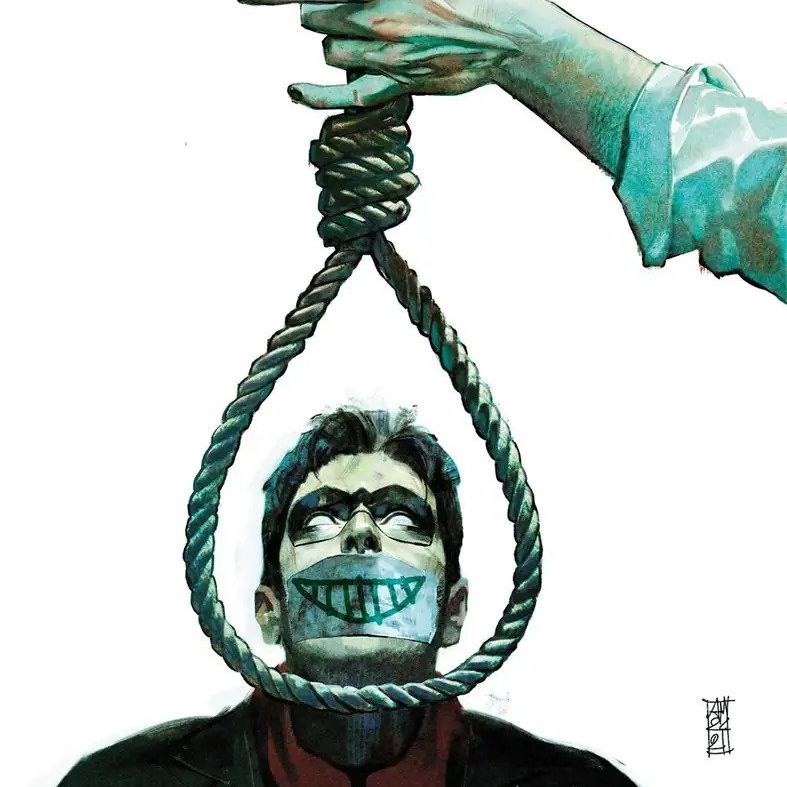 Synopsis (spoilers ahead): Suicide Squad: Get Joker #3 begins outside the club as Red Hood’s team finds themselves in the sites of Task Force X. Red Hood and his team run back into the club with Deathstroke, Deadshot, Peacemaker, Flag, and Firefly on their tail. The battle quickly becomes violent as Joker’s men and the newcomers unload on each other, forcing Red Hood and his team to take cover.

Jason contacts Larry, who is just walking his dog. Larry tells him that Waller is in a coma and that he is the new director of the Suicide Squad. Jason likes what he hears. Larry tells Jason that with Joker in control of the box, Red Hood and his team are weaponized. He made an executive decision to send Task Force X to take every one out. Jason has no help; they are on their own.

Joker fires a grenade launcher into the room to eliminate the new threat. He does not succeed as another of his men is gunned down in front of him. Firefly unwittingly gives them cover as the team and Joker scramble onto the ice cream truck, taking her with them as their captive. They escape but not for long.

With Firefly as their captive, Jason interrogates her. Jason discovers a tracking device on her, but it is too late. The second team has tracked their location and attacked. The battle takes to the road as Red Hood’s team is taken out one by one. First is Plastique. She is hit as the team makes a break for the van. She can give them a little cover as she explodes. Joker leads them to his old hideout, the Jester. Harley will not go in with them. The rest seek to reactivate Toyman. Joker takes them to the real Toyman, Winslow Schott. They are interrupted by a group of children. Joker tells them that they started showing up, he tried to shoo them away, but eventually, he started to take care of them.

The remaining squad members squabble over who is the leader. Mary crushes the box, declaring that nobody is leader. After a little quiet, they are attacked again. Pebbles is the next to die. They discover that there is a meta, and Mary attacks him, leaving Wild Dog and Red Hood. The kids attack the attackers and are mowed down for their trouble, fortunately off-panel. Wild Dog and Red Hood escape.

Waller wakes up and contacts Jason. MadDog provides cover and is killed for his trouble. Two more of Larry’s squad tracks down Jason, but Harley Quinn attacks them. Jason takes out the two. Leaving only Jason and Harley. Harley tells Jason that Joker is probably on the beach. Jason goes to finish the job. Harley cannot go with him; she is afraid that Joker will use the right words to make her weak. The conclusion is a gunshot. However, it is not clear if Jason dies or if he finally got the Joker.

Analysis: There is not much to Suicide Squad: Get Joker #3. It is basically a long chase scene were the main characters are picked off one by one. Only Red Hood and Harley survive, but with the rising sun it is unclear if the only survivor of this mission is, in fact, Harley. She hears the shot, but we do not see who fired the shot.

The art is cartoony, which makes the graphic violence depicted tolerable. The body count is enormous, but I failed to care after a while. This story is outside of any continuity and just seems to be a way to tell the most disjointed, confusing story ever. It also allows one to draw the most gruesome and violent deaths imaginable. There is no fun here.

The story is okay and the art is okay. Overall, I am left with the question of why this story needed to be told, much less in a prestige format miniseries.