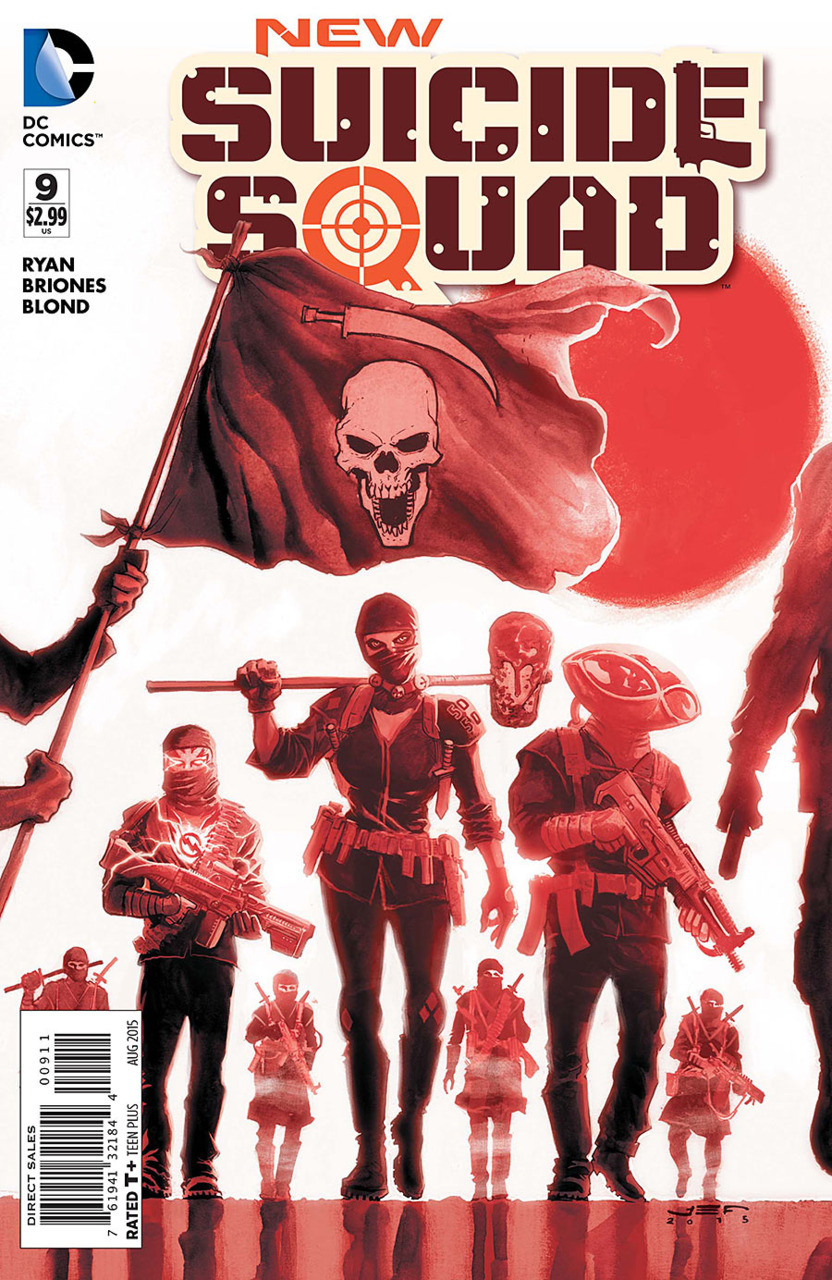 Monsters open with Deadshot talking with a boy. It is night and their location is not known, the boy offers Floyd a light.

We shift to four weeks earlier at Floyd Lawton’s cell at Belle Reve. Lawton has to go to a mission briefing for the next mission of Task Force X. Lawton is brought in to join Black Manta and Captain Boomerang. Waller immediately calls the group to focus after some quick bantering. Manta amusingly asks if this mission is different because it’ll be planned properly.

The mission will be an infiltration mission. A splinter group from the League of Assassins has broken off from the main League. It feels that the original League has grown soft. Their goal like the original is to take over the world and force it to live under their ideology. This new League is now active in broad daylight instituting their ideology of terror. They have taken over massive amounts of Middle Eastern territory. The added danger of the League is that they have been acquiring black market tech from American Super-Criminals. The mission is that Lawton, Manta, and Boomerang will pose as criminals wishing to join the League. They are to discover what weaponry; the group has amassed and kill everyone they can on their way out. To assist the three infiltrators escape from the League will be Harley Quinn, Reverse Flash (Daniel West), and Parasite. Before the mission can begin, Lawton, Manta, and Boomerang will have a crash course in the League’s belief system.

After the course, we move to Turkey. The three meet up with Tomorrow Thief, who has already joined the League. He will be the contact to get the three in to meet the League. Tomorrow Thief has been with the League for seven months and he is 100% in with them. The three are led into the ruins of what looks like used to be a hotel. Quickly sacks are placed over their heads. They are separated, stripped to their boxers and tortured and questioned about the ideology of the League. The test is to determine if the new comers truly believe in what the League stands for. After the questioning, the three are seen dressed again and unconscious. One of the members of League enters and orders the three to come with them. Sacks are put over their heads again and they are led out into the desert.

Once there, they find three people frozen with freeze weapons the League has procured. The three are handed base ball bats, they are to kill the frozen “heroes”. Manta immediately kills his and Lawton and Boomerang follow suit. We leave the issue with the three apparently being accepted into the League.

There is very little to say about this issue. This issue was all set up with very little action. We can only assume the opening scene of Lawton is in Turkey, and we do not have any idea where Boomerang and Manta are. What we can tell from the drawing of Lawton is that he is bruised and apparently exhausted, nothing else is clear.

I liked the art in this issue, there was little ambiguity in the drawings and it was easy to follow the action.

I particularly liked the snarky remarks the three make during their mission briefing. Manta continues to dislike the lack of planning in the missions which he has been complaining about since he joined the Squad after the Forever Evil event. Boomerang and Lawton continue their bickering which added some humor in the story.

We move the story forward but we still want to see what will happen next. It appears slow but I do not feel that this is a filler issue. This is a focused mission and I wonder since we are dealing with the League of Assassins, will we see Ra’s al Ghul in this arc?

It was a good issue but I cannot call it a great issue, but I also want to see what happens next.