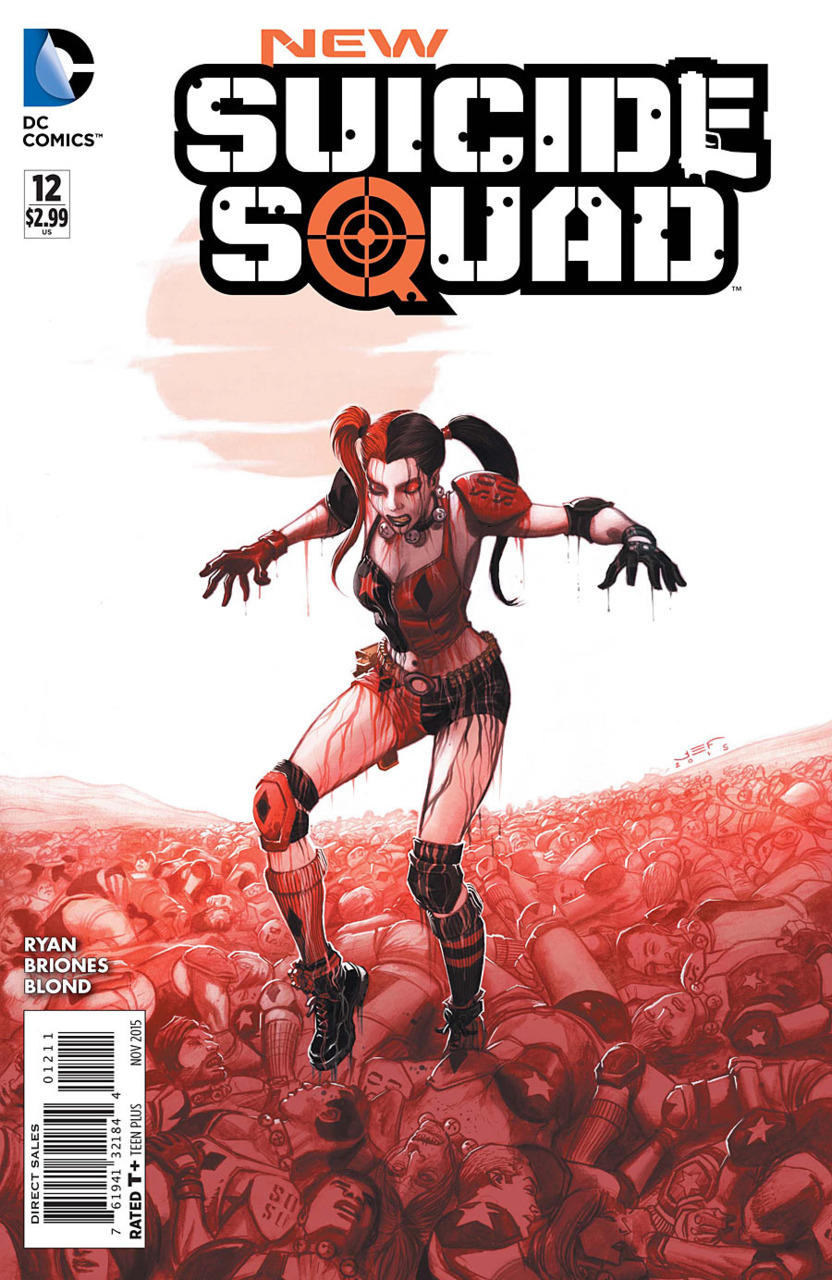 “Monsters” continues with a stunned Reverse Flash attempting to get back on his feet after the battle at the refinery. Meanwhile the League scientists are attempting to study the captive Parasite in hopes of using his abilities in the League body armor. Meanwhile Harley is being held captive with the kids who were playing soccer two issues ago. In voicing her displeasure to the kids, she starts making farting sounds with her hands making the kids laugh. The scene ends with Harley just making an amused face at the kids.

Elsewhere in the armory, Black Manta is talking with Saladin, the leader of the League. Manta is pleased that he has finally found an organization that truly promises order and structure. Saladin appears to be taking Manta into his confidence. Saladin shows Manta a time bomb. This bomb will be able to transport the League’s enemies through time and he is preparing to build an arsenal.

Elsewhere, Belle Reve is attempting to contact Daniel West, the Reverse Flash. They can get the signal to him but Reverse Flash is not able to communicate back. He can hear their transmission but he is unable to transmit a reply. Amanda does not want to abort the mission but she and Vic agree that they need someone on the ground to be their reliable eyes and ears. Amanda knows someone she worked with when she was in the military but she has to track him down. Bonnie is ordered to keep trying to contact Reverse Flash and notify Amanda and Vic when she does.

Back in the cell, Harley finds herself entertaining the kids. She asks the kids what got them thrown into the cell and the kids are quiet. She starts to work out a plan to escape with the kids.

Back at the barracks, Manta joins Deadshot. Manta tells Floyd that he was shown the armory and Floyd wants to destroy it and complete the mission. Manta disagrees and says that he is not leaving and he plans on joining the League. The two argue and Floyd leaves the room.

Out in the wilderness, Belle Reve continues to attempt to contact West. Bonnie over the transmission reports that she is trying but West is not responding. Waller pipes in to stop trying. West overhears over the transmission that he as the Reverse Flash has been a failure to the Squad from the beginning. We see the expression on West’s face turn from surprise to determination and he speeds off, we just do not know where.

We have an interlude with Floyd smoking and talking to a child about his daughter. I think this might be the scene this arc started on several issues ago. Floyd decides to not leave on his own, he presumably decides to complete the mission at least that is the impression I have from his statement of that he’ll have to kill Boomerang for saving his life.

Back in the cell where Harley is being held, the kids are having a glorious time. Their laughter has gotten the attention of one of the guards who storms in to see what the commotion is about. Harley attacks the guard avoiding his fire and stealing the sword strapped to his back. She cuts off the guards gun hand and kills him in front of the kids laughing maniacally as she does it. Afterwards we see that she has terrorized the kids and the last panel is a close up of her face with her eyes wide open wandering what she did to scare the kids.

The final scene of this issue is Manta entering Saladin’s office. He is there to confess that he is there as a member of Task Force X under the United States government and now he wants Saladin’s forgiveness. This arc will conclude in Annual #1.

I liked this issue. There was not a lot of action but I think that was good after the action from last issue. We do not get a lot from Parasite or Boomerang, who has been absent from these last two issues. We do get a lot from the other members of the squad.

Harley Quinn: We see that she starts out kind of hating the kids but as she gets to know them they warm up to each other. It was actually sad to see the kids suddenly afraid of her after they watch her kill a man. It was just as sad to see her reaction, she does not understand what scared the kids.

Black Manta: Manta here professes his allegiance to the League and finally he declares his desire to join them. If this is a trick on his part, he has me fooled.

Deadshot: Floyd has a moment where he focuses on his daughter and what she would want him to do and here he decides what he must do and starts to move to complete the mission.

Reverse Flash: West hears what Amanda thinks of him and he appears to have made a decision himself, we just do not know what and if it involves the mission.

This issue has me asking a lot of questions about the different characters and I am really looking forward to see where we end up with this arc. New Suicide Squad is becoming my favorite book of the month and I hope the story can keep this level up.