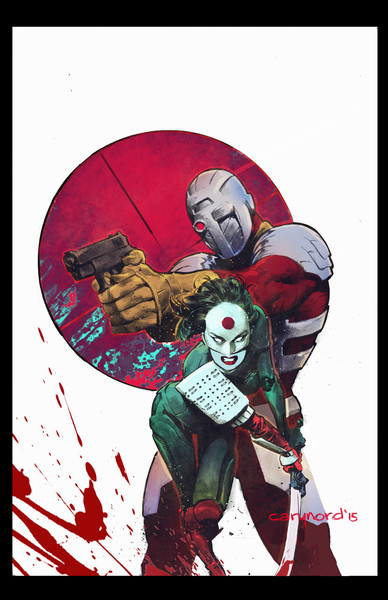 DC has announced that the current ongoing series New Suicide Squad will be getting a six-issue miniseries spin-off coming in January 2016, titled Suicide Squad: Deadshot/Katana.  This double-sized limited series will focus on the characters of Deadshot and Katana; although, it seems that each character will have stories of their own rather than a story together.

The press release states that writer Brian Buccellato and artists Viktor Bogdanovic and Richard Friend will bring a new story about Deadshot trying to reestablish himself as the worlds most deadliest marksman after escaping from Belle Reeve Penitentiary and finds himself facing secrets from his past as he tries to eliminate his target, Lex Luthor.

Also, Mike W. Barr will be returning to the character of Katana in a new story with art by Diogenes Neves in which Katana tries to save an entire nation from the mystical threat of Kobra while also delving into the origins of her sword, Soultaker.

There is no official word on whether this series is taking the place of the originally announced Katana mini-series that was also supposed to be written by Barr and debut in January. But it can most likely be assumed that Deadshot will just be sharing the series with her.

Given that the new Suicide Squad film debuts in August of 2016, it is unsurprising that DC wants to put two of those main characters back into the comic spotlight leading up to the film.  Stay connected to TBU for more information about Suicide Most Wanted: Deadshot/Katana and for information about the upcoming film.