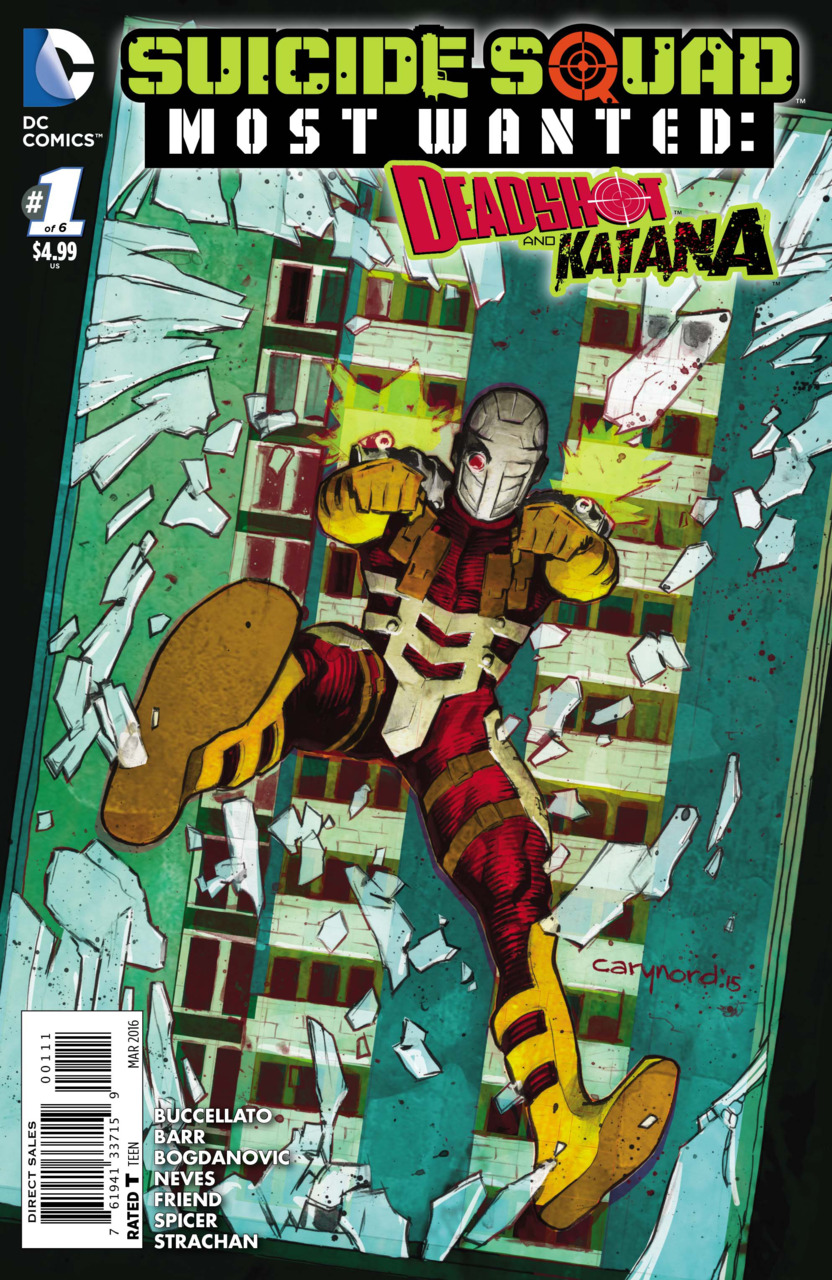 Deadshot goes AWOL from the Suicide squad to settle an old score and Katana has a run in with a bad crowd as she tries to discover the secret of her sword in Suicide Squad Most Wanted – Deadshot and Katana.

Some mercenaries in South America are being shot by an unknown gunman that happens to be the narrator. The mysterious sniper finishes off the mercs with a bomb and out of the smoke emerges…Deadshot. The mercenary leaders figure out that it is ol’ Floyd causing all the ruckus but to no avail as he shoots them too. He does save one of them so they can get the location of their master, Che.

Deadshot returns to Belle Reve and apparently Steve-McQueens a ball against his cell wall for three months when suddenly an envelope slips under the door. Floyd goes to Amanda Waller’s office and wants to visit someone in hospice care. Waller refuses and tells him that he has a new mission to kidnap Che’s daughter. Also, Floyd has a new parter, Will Evans, a new member of the squad. The pair really don’t get along and do a few exercises in comparative manhood to discover who is the top dog. Deadshot comes out ahead on total points.

The plan is to kidnap Lenora LaPaz on her way home from school. After quibbling about various aspects of the plan the pair move into position. Several bad guys find them selves sniped but just when they should be able to move in Will Evans finds that several of the folks Deadshot was to have killed aren’t nearly as dead as they should be. Will Evans abandons the plan and moves in. Sadly Deadshot is not on the scene to have his partner’s back but is off on his motorcycle to a hospice. He is there to kill his father. End of Act 1

Katana’s story begins somewhere in Markovia. An army is being rallied to usher in the Age of Chaos by the megalomaniacal Lord Kobra who is flanked by his Lady Naja.

Katana is in an aircraft flying to Markovia on a mission to the beleaguered country when her plane blows up. Her wreckage is attacked by soldiers loyal to Lord Kobra. The soldiers have no chance against Katana and all but one meet their deaths.

Knowing that the survivor will return with more troops, Katana hurries to what appear to be a wealthy person’s home. Her activities are witnessed by two children who respect Katana’s skill but still fear for her life and declare that they will save her.

Katana gets into a laboratory in the home and finds the mystical astrophysicist, Dr. Jace, she has come to find. Katana shows the scientist the reflection in her sword which shows the souls of the swords victims that are trapped in the steel. Katana tries to get the scientist to leave with her but they are stopped by a group of townspeople, apparently summoned by the children, who are there to ask for Katana’s protection from Kobra’s minions.

Katana gets the villagers up to some project when the soldiers approach. Katana tells the villagers to hide. Lady Naja is in the lead vehicle of the bad guys. Katana orders her disabled aircraft to be remotely launched. Naja’s vehicle shoots at it but ignites some gas which burns the evil army.

Katana comes face to face with Lady Naja and Naja outfights our hero. Naja abducts Dr. Jace. Kobra announces to the towns people that they will submit to him or perish. Until next month…

The first thing to wonder about here is how the existence of Deadshot’s father is going to change his backstory. The reason Floyd became Deadshot was in response to the death of his parents. How will old line Deadshot fans take to the change? And how will this get resolved in the story? Brian Buccellato makes some pretty big alterations here it remains to be seen how this will play out.

Viktor Bogdanovic’s pencils and Richard Friend’s inks are strong and dramatic in the full page drawings like the introductory image of Deadshot emerging from the smoke and the drawing of him in front of the hospice. Some of the smaller drawings seem scratchy and fussy.

That being said they work very well with colorist Michael Spicer especially when they draw fiery explosions. The flames seem to be licking their way into the sky and you can almost see them moving. Very well done.

Mike W. Barr’s Katana story seems to be very by the numbers. Big bad guy with an army of minions – check. Katana on a personal mission in a war zone – check. Paths cross and fighting breaks out, you get the idea. However the idea of the villagers at once helping Katana and asking for her help is interesting.

Artist Diogenes Neves and Colorist Carrie Strachan create a gauzy world that is effectively contrasted by all the blood and explosions.

This book is an obvious set up for the Suicide Squad Movie. It will be interesting to see how the stories progress and if other movie characters are integrated into the plots. Despite that, both stories are an enjoyable read.