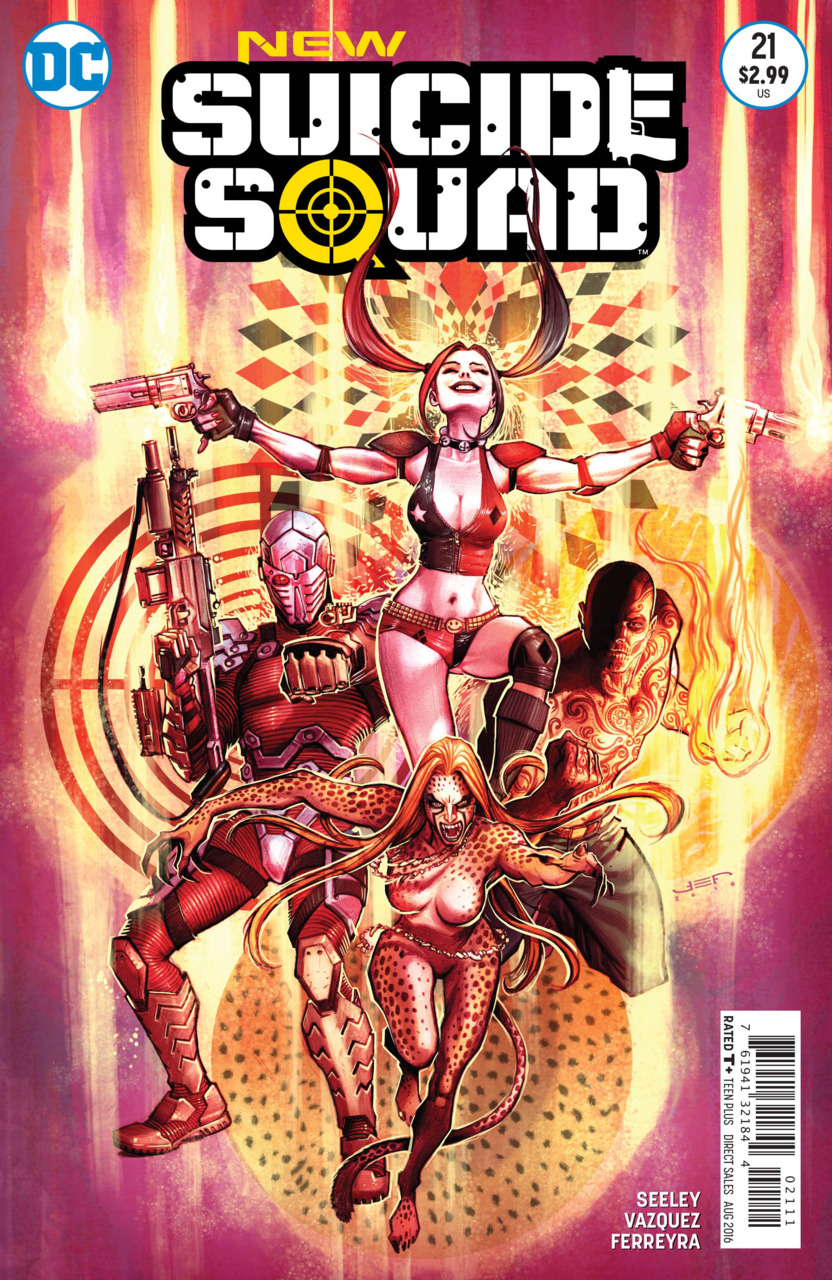 Synopsis: The issue picks up with the arrival of Captain Boomerang to save the Suicide Squad along with Amanda Waller. He questions a guard on how to operate the cameras within the castle then proceeds to slit his throat and watch the “telly”. Meanwhile, Cheetah battles the Spirit of Murder as Harley and Diablo look on. Diablo gives a little background into his past and how he feels it’s his fault that the Spirit of Murder is drawn to him and his vengeful fire.

In the chapel within the castle, Adam Reed congratulates Deathtrap on killing Deadshot. Deathtrap states that he only wants his story and achievements to be told. Adam does not let him finish as he stabs him in the neck. He then orders his minions to carry the unconscious body of Amanda Waller to the altar as a final sacrifice so that he may be the Shepherd of the Fist of Cain. Adam then puts on a cloak and, while being recorded, delivers a speech about how the world is different and he has determined that the only way to save the world is to give it fear and use killing so that only the strong survive.

During his speech, Diablo determines that the only way to stop the Spirit of Murder is to send her back to the underworld with his powers. Harley rescues Cheetah while Diablo engages with the Spirit of Murder stating that this act of redemption will allow him to be taken to heaven and not hell with the demon. With a blast of fire, the two disappear leaving a flaming skull on the castle floor.

Back in the chapel, a guard notices that the bullet that Deathtrap shot Deathshot with was a rose petal. Just as he alerts Adam Reed, the two get up and begin fighting their attackers. Adam still appears to have the upper hand when he reveals the remote trigger for their neuro-bombs. Just as he is about to push the button, a boomerang slices off his hand.

Captain Boomerang announces that a plane is coming to pick them up. Deadshot offers Deathtrap a chance to come but he states he would prefer to blow up the castle and all the Fist of Cain. The team escapes as the castle explodes destroying the Fist of Cain and Adam Reed.

The issue concludes with the team back in Belle Reve and Waller looking into a new case of a French supervillains. In the bathroom, Harley interrupts Floyd and talks about Diablo’s death. She ends the issue with starting to discuss a new escape plan for the Suicide Squad.

Thoughts: As usual with this arc, I enjoyed this issue very much. With the outcome of the story, I really did not think that Diablo would die which was surprising. I am not sure if they will bring him back right away given his role in the movies but Seeley gave him a heroic and noble death here so there definitely was a silver lining.

The humor was on point here and I got a few chuckles from seeing Captain Boomerang who has not been a character that I have read very much. I really liked the final panels of Harley clueing Deadshot into another plan of escape.

There was not much change with the artwork despite a different penciller, Gus Vazquez. Ferreyra was attached to this issue and his touch could be felt throughout the issue. This issue had an epic showdown between Diablo and the Spirit of Murder which I thought was handled really well due to the artwork.

Overall, the issue was fun and had some very intense moments so it ended up being an enjoyable read. As always I look forward to the next issue but will be sad to see the creative team leave after next month’s issue.