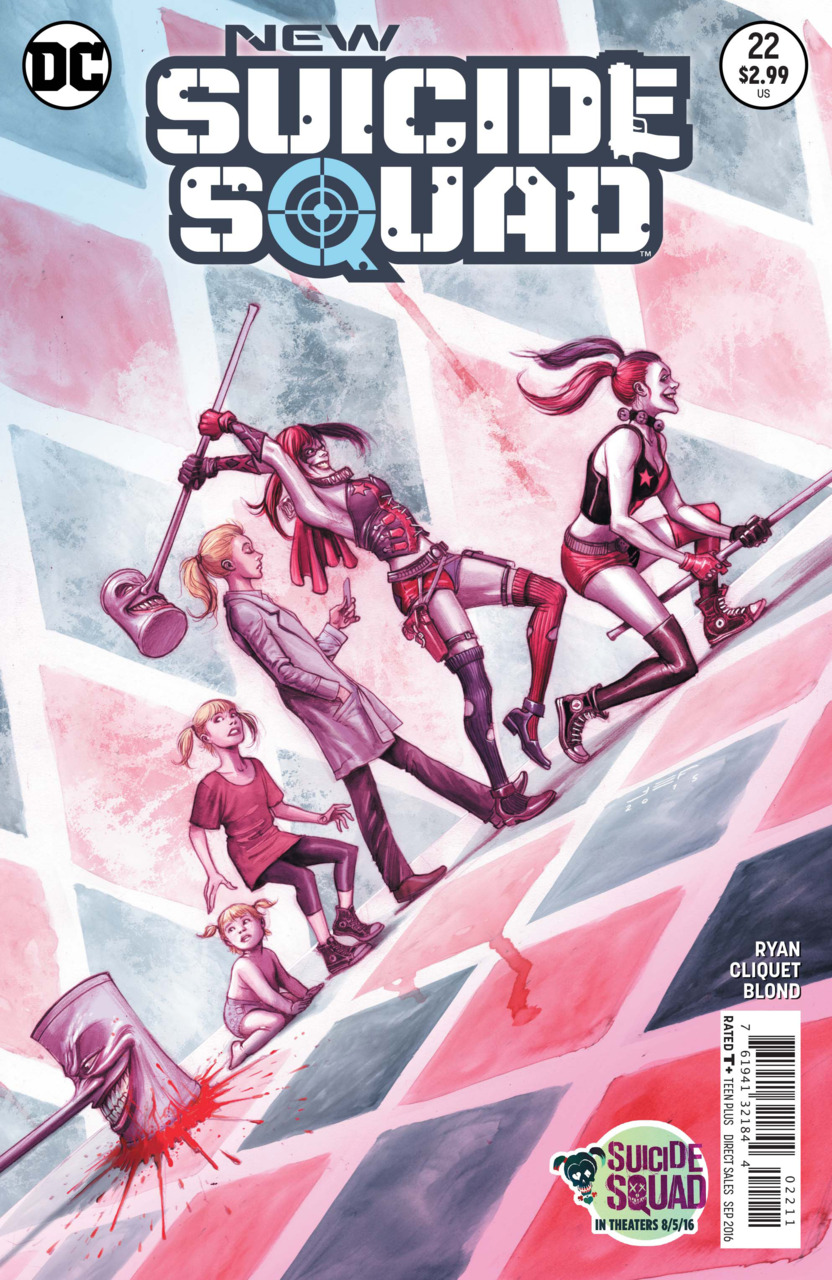 Synopsis: The issue opens with Harley on a doctor’s couch and apparently not in the “sharing mood” with the therapist. Harley is asked to describe what is going on within her mind and Harley blankly states “nothing”. Nothing could not be further from the truth as the issue begins to delve into Harley’s psychotic mind.

She is in a dark tunnel and complains its too quiet. She sees a red door and thinks she hears laughter and fun behind it. Harley begins to go towards it but is stopped by Batman. The version of him within her head is a giant apparition that seems to be one with the dark tunnel. He tells her to not go in through the door because she knows how that trip will end. She refuses to be left alone in the darkness with just her thoughts.

Inside the door is an amusement park seemingly designed by her and the Joker. It is full of dangerous rides and crazy attractions. Harley is having fun but then things start to get out of control. Before she knows it she is trying to escape the park and next finds herself reliving old memories involving her critical mother and absent father. She also sees herself as a young doctor at Arkham just before she meets the Joker and how bored she was in life.

The issue ends with the reveal that the therapist she was speaking with was actually the young Dr. Harley. The doctor tells her she is trying to help her break the cycle that she finds herself in countless times but Harley only replies with “thanks for nothing”.

Thoughts: As a more in depth look at the mind of Harley Quinn, this was a very interesting issue. As a Suicide Squad story, it really did not involve anyone (unless, of course you count a number of Suicide Squad members’ toy forms coming to life). With Rebirth now restarting the clock and story arcs there was not much the creative team could do in terms of plot lines. They pretty much just need to run out the clock. Having said that, I am glad we got this interesting look into Harley’s inner struggle with her psychosis. I admittedly have not read the numerous Harley titles that have come out recently so this issue may have rehashed many aspects of what those titles explore but I still enjoyed this issue. Again, there was not much for the advancement of the Suicide Squad’s story so I wish they could have tried to somehow tie in Harley’s madness with the rest of the team.

The artwork in this issue by Ronan Cliquet had a very bizarre dreamlike sequencing which captured the tone of the issue perfectly. His work on facial expressions helped to illustrate the wide range of emotions that Harley can have at any given moment. I particularly liked the way he depicted Batman in Harley’s mind as a nightmarish and “all panel consuming’ presence. Even though credit is also due to the writer Sean Ryan, I thought it was very interesting that the creative team made Batman this harsh and scary presence in Harley’s mind but that he represented her sanity and rational mindset.

Overall, I thought this was a great Harley one shot issue. I enjoyed reading it but have to admit that it did not really tie in to the Suicide Squad apart from the quick panels showing Harley in prison, presumably with the rest of the team. I am still very much looking forward to the next arc for the Suicide Squad so this Harley issue was a good filler until then.