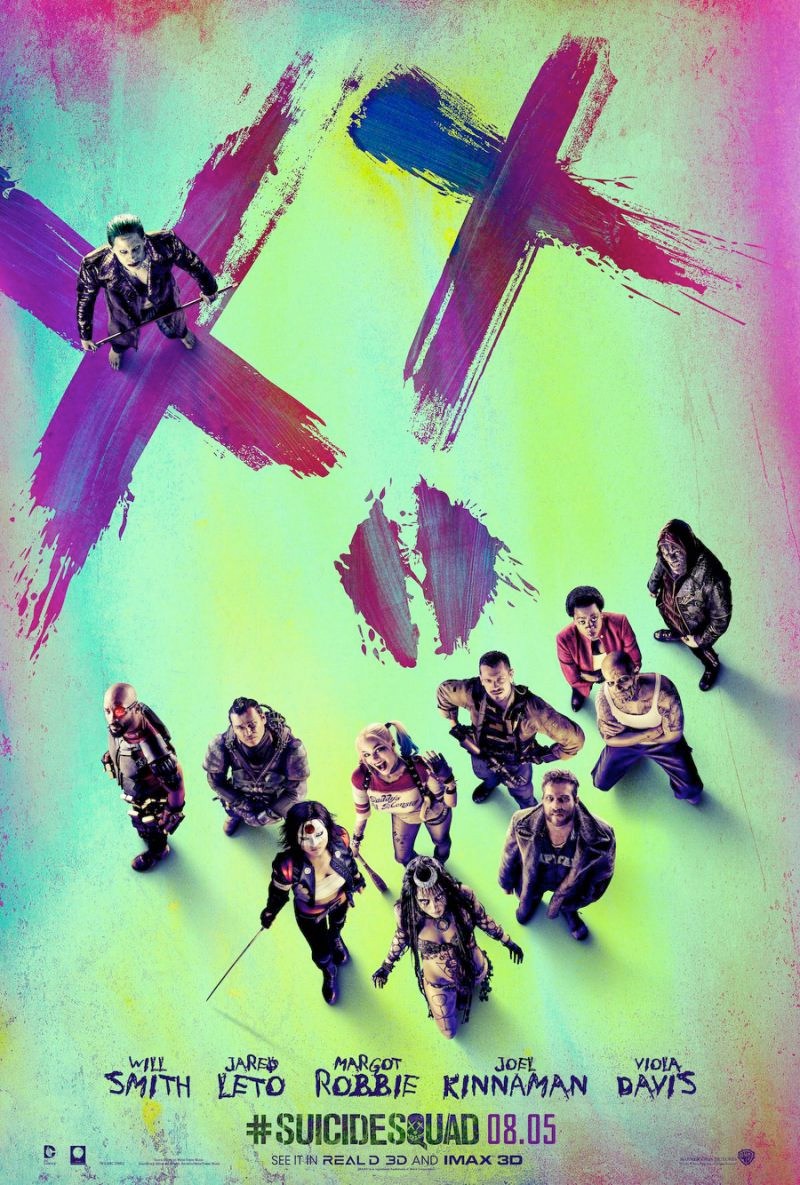 Suicide Squad is a colorful, highly engaging superhero action movie which nails the personas of the main characters and is anchored by strong performances across the board and contains plenty of laughs. The movie is a much needed creative shot in the arm for the DC cinematic franchise still trying to hit full speed with a second major release inside 2016.

The basic storyline first. Taking the Dirty Dozen concept of “the best of the worst” to the world of the DC Universe villain back list is a genius idea in itself – given the amount of characters created over the years, ranging from A-listers to D-listers, the idea of Task Force X, a suicide squad, a team of villains co-opted into serving government interests (with a bomb in their necks if they run) seems custom built for modern audiences and a full on action movie.

To this purpose, Amanda “The Wall” Waller, played extremely well by Viola Davis, assembles this team of imprisoned criminals in the wake of Superman’s rise and death in Batman vs Superman. “What if Superman came down and ripped off the roof of the White House?”, is her pitch for the necessity of her hand picked suicide squad. “This Superman shared our values. What if the next super man doesn’t?” Decent point.

We are quickly introduced to the list of candidates that Waller manipulates to her own end. Deadshot (Will Smith) is a ruthless assassin for hire who doesn’t miss a shot. His weak point is his child in Gotham, which is how Batman captures Deadshot on a night out shopping with his kid. Harley Quinn (Margot Robbie) is a former psychiatrist who treated the Joker (Jared Leto) and was ultimately brainwashed, seduced and abused by him. She’s incredibly loyal to the Clown Prince of Crime who literally led Harley to the chemical vat which she plunged into, making her skin snow-white and leaving her mental state and personality in a kaleidoscopic, high intensity mess. Diablo (Jay Hernandez) is a gangbanger who can create fire from his fingers with his mind and has fried an entire prison yard before walking away from violence after also killing his family in a fire. Killer Croc (Adewale Akinnuoye-Agbaje) is a reptilian monster-man who lives in the sewer and is thrown into a dark hole in prison where they throw him slabs of meat. Captain Boomerang (Jai Courtney) is an Australian bad-boy alcoholic thief who is amusingly unrepentant about everything and can throw boomerangs well and has a pretty pink unicorn in his jacket. He’s hilarious.

Enchantress (Cara Delevingne) is an interesting one. A riff on old pulp stories, Dr. June Moone “fell into the wrong cave” on a remote expedition and found the wrong religious icon, unlocking the Enchantress, an extra-dimensional entity of evil and extreme craziness who instantly possesses the Doctor. Amanda Waller has located the heart of the Enchantress from that same cave and uses it to force the entity to do her bidding, such as stealing Tehran’s nuclear logs and encouraging the Pentagon to authorize the Suicide Squad. Dirty people for dirty missions. Complete deniability.

Overlooking this bundle of misfits is Colonel Rick Flag (Joel Kinnaman) a celebrated soldier who bleeds red, white and blue. His weakness is personal – a romantic attachment to the doomed June Moone, the possessed human doctor inside the Enchantress. Amanda Waller paired them together, her ability to manipulate those her in charge her most important power.

Director David Ayer (End of Watch, Fury) brings a striking visual style to Suicide Squad – each character is introduced with logos and bullet-points. The usage of bright colors is prominent. There’s a reliance on sly, dark humor throughout. Diablo, a character I neither knew nor cared about, is funny in his own way, able to create signature images in fire. On the flip-side, the usage of the chains and “swamp monster” vibe of the Enchantress was extremely impressive and eerie. The script nails the main characters and gives them an extraction mission inside a Midway City being torn apart by the extra-dimensional powers of the Enchantress and her brother that we can barely understand – it’s extreme and reminiscent of a video game cut scene in the best way. What some might describe as disjointed, I found exhilarating, a pushing against convention and formula and really not that hard to understand. In a packed cinema of young people who delighted in the movie, I felt we were watching a different kind of big budget superhero piece, less clean than much of the Marvel product but not suffering for it. There’s trace elements of a Deadpool vibe at times, but it’s tied into a more linear narrative and is really it’s own beast.

It’s undeniable the film has some story comprehension issues, but these didn’t diminish genuine enjoyment and as a movie, this moves along at a fast pace and is never boring. The mission itself features the Squad, Rick Flagg and a few Marines, while the primary threat, that of the Enchantress and her crazily OP brother, is so bonkers insane that while I’m sure some criticized the otherworldly threat, complete with blazing lights in the sky, I found it an enjoyable glimpse into the kind of mystical, reality-altering event comic book universes regularly throw at the heroes, or in this case, anti-heroes.

Although I personally enjoyed her performance when Cara Delevingne goes into Enchantress mode, as the movie presses forward and her powers amp up along with the CGI, there’s a certain “shimmy” to her hip and torso movements that adds to the old-timely feel of her performance and character. I’m reminded almost of images from ancient monster movies or the hip swivels of a belly dancer – personally I found it a charming touch. It’s certainly an impactful and fun performance.

One of the larger concerns was Jared Leto as the Joker. His performance was generic rather than inspired, any impact utterly extinguished by Margot Robbie’s turn as Harley Quinn who steals both the show and Joker’s thunder. Visually the aesthetics of the Joker character were fantastic and lent an air of gold-toothed sleaze to proceedings. Unfortunately, whilst the visual stylings were striking, Leto’s performance seemed muted and bland. Indeed in a movie packed with strong performances in a large ensemble cast Leto stood out as ordinary, whining and wheedling where others glowed. In fairness, his role in the movie is quite slight. There’s talk much of his role was left on the cutting room floor and I don’t regret that.

We must talk about Harley Quinn. As predicted and seen in the marketing, Margot Robbie was crucial to any splash this movie was going to make with viewers and at the box office. I’m thrilled to report it was an exceptionally acted piece in a role which does require nuance and grounding when dealing with Harley’s fluid and exciting personality and she gets considerable room to move in the script. Robbie is an exceptionally attractive performer and Harley is a suggestive and sexualized role which the film uses to it’s advantage, but it’s a mistake to assume Margot Robbie only sells it on looks and a great rear. Although she has both, she is just as entertaining with her sense of disjointed comedy, which is a strange balance between fragile and tough which signifies Harley. Throughout the movie, Harley is the emotional heart of this movie, discordant and pulsing with energy and bright colors, sarcastic and fun. A weaker performance or a less nuanced one could have sunk the role and the movie, that’s how delicate and sharp the knife edge is.

I’ve mentioned previously that action movies and superhero films are continually ignored at awards ceremonies as if it doesn’t matter how good the actors are in these pieces or how audiences respond. I’ve said Robert Downey Jr. should have walked away with a major award for his efforts as Iron Man – I’d nominate Margot Robbie in that same category. Based on this movie, she could launch a Harley franchise. The devil-may-care attitude and persona of Harley Quinn has a bright future inside the DC cinematic universe and I hope she has an opportunity to grow beyond the confines of the Joker’s orbit, (as she starts to in this movie) perhaps in an ensemble piece with Poison Ivy for example, as has been explored in the comics and some animated episodes.

Will Smith is a gifted actor who has long shown he can balance comedy with drama and combining him with Margot Robbie, Smith anchors the movie and gives it a human component. If we are never really convinced by the story itself that Deadshot is more than “a serial killer who takes credit card” Smith’s performance humanizes him and makes the audience empathize for his character. Given the tangential links to Gotham and the Batman, having an actor of Will Smith’s quality and stature would be an ace in the pack when it comes to Ben Affleck’s upcoming solo Batman outing.

Wrapping up the discussion on the cast, I was impressed by Jai Courtney as Captain Boomerang, a character that seems laughable both in powers and appearance. I’ve always found Jai Courtney a solid actor in roles that didn’t showcase much range but he slides a sneaky, subversive humor into his scenes and lines and for me was one of the hidden highlights of the movie.

There’s Easter egg cameos from a hero I didn’t expect but did enjoy, (spoiler, he wears red and runs fast!) and there’s a sprinkling throughout of the Bat. Just enough, I thought. In such a large ensemble piece I expected a little bit of Batman and that’s exactly what we saw. Without giving away serious spoilers stay behind for a mid-credits stinger which does build the wider story of the DC cinematic universe and Bruce Wayne’s role in it. As I finished watching this movie I was pumped and genuinely excited for the future of the DC cinematic universe. With this collection of actors and characters, combined with the upcoming release schedule (Wonder Woman, Justice League, Batman) I find it hard to be negative and I would expect this movie will do excellent business at the box office and we will see at least some Suicide Squad characters cross pollinate in either Justice League or the Affleck Batman solo movie. The future is crazy and lit in bright neon.

On last piece of advice, WB, lock David Ayer in for a Harley movie.