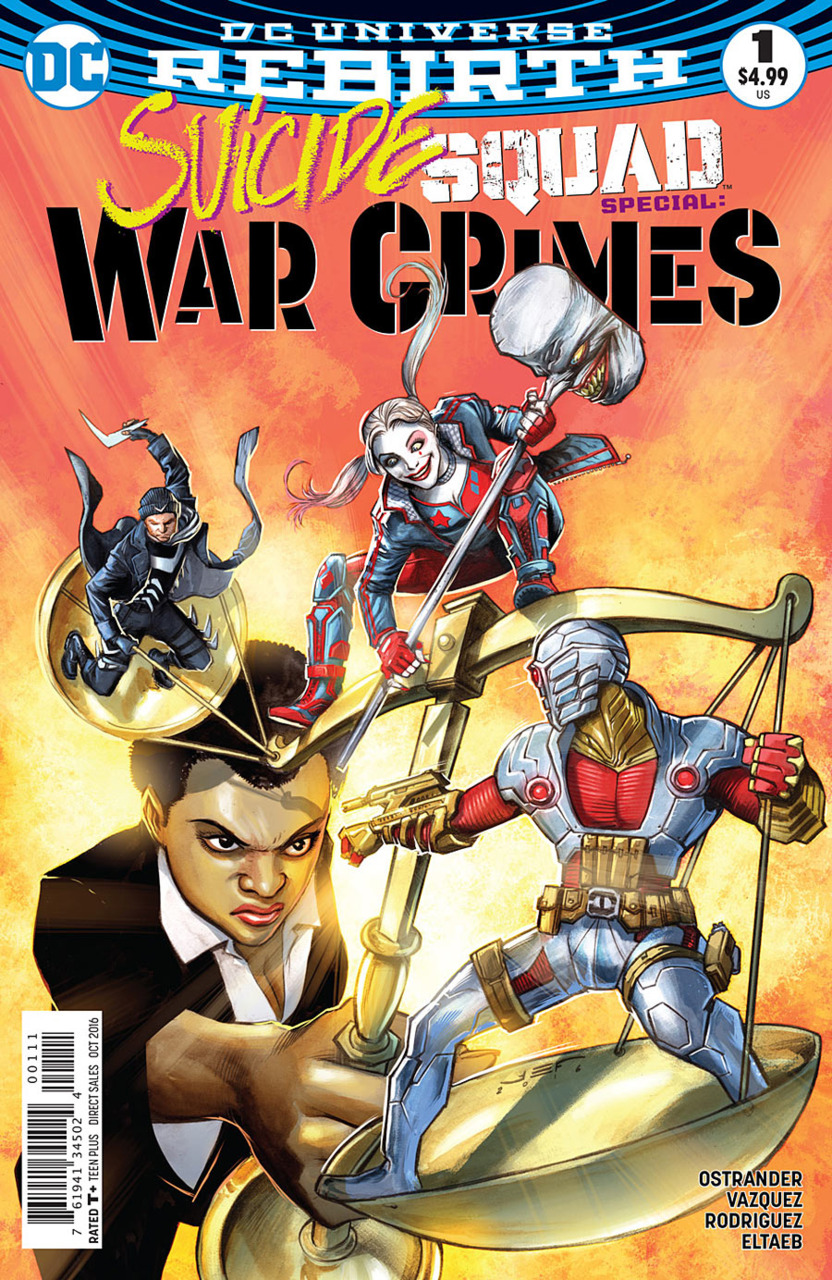 Synopsis: Secretary of Defense, Mr. George Carmody, has just finished an interview in New York City, and a team of metahumans are waiting for him in a parking garage. They take out his security guards, and throw him into a van.

In Belle Reve, Amanda Waller gives her team an update as to what’s going on. They are tasked with rescuing Mr. Carmody, and safely bring him back to the U.S. The team is comprised of Rick Flag, Deadshot, Captain Boomerang, Harley Quinn, El Diablo, and a man called Mad Dog… Take a wild guess as to who bites the dust…

Waller informs the squad that the team who has captured the Secretary is called Strikeforce Europa. They are operating of their own accord, and their superiors are not very pleased with them right now. The team doesn’t see how this mission will possibly work out in their favor, but Waller has a plan…

Four days later, Carmody is being transferred, and Flag and Deadshot have infiltrated the security, and take out the whole group before they know what hit them. Boomerang, Quinn, El Diablo, and Mad Dog run into Strikeforce Europa, and have a battle with them. The team is overwhelmed and they decide to fall back to the van they came in. Boomerang knows there is a quota with a title like “Suicide Squad”, and leaves Mad Dog to die… which he does when Waller detonates his bomb (no… don’t… stop).

Then Shado (from Green Arrow) shows up takes out Deadshot and Flag, and takes off with Carmody. Strikeforce Europa show up, but a still-disguised Flag tells them how Shadow has captured Carmody… So both teams take off after her, who gets away with the man in a helicopter. Boomerang takes it down with his… well, boomerang, and the two metahuman teams begin to duke it out again.

A concussed Deadshot and Flag show up in an ambulance, pick up the whole team, along with Carmody, and get the crap out of there. They crash their way through to a pier, and escape via boat. They head straight toward a storm, and then catch a flight to the U.S. where they meet back up with Waller, who shoots Carmody in the head. Strikeforce Europa was right… Carmody did commit war crimes, but Waller couldn’t take the chance on him leaking that information to them in exchange for his life.

Script: John Ostrander makes his return to the comic he helped make famous. Now I’ve never read his past work, but I’ve heard nothing but good things about it. However, I can only judge him for his work here. I have zero nostalgia clouding my rating, and I’m sorry, but I just didn’t like this one-shot. Now this issue is double sized, and I applaud Ostrander for making full use of the page count, but the pacing was all over the place. For several pages, we spend too much time in a scene, and towards the end, it’s all rushed to a conclusion to finish with the allotted page count. Several moments didn’t make sense, I was left confused, and I still am… The problem is, I don’t know if this is on Ostrander or the art team… I had several problems with the art.

Artists: Gus Vazquez and Carlos Rodriguez are alright with the look of their art on a page. It would surprise me if anyone told me that these guys were their favorite, but I can’t say that it’s bad… What I can say didn’t work here, was their storytelling. There were several inconsistencies, in the art alone, but also that conflicted with basic common sense. The moment were the team arrives on the pier, Flag tells El Diablo to “discourage pursuers”, and Diablo burns the cars as the team escapes in a boat out at sea… Nice going Flag. NOW they can’t follow you. Because it wasn’t enough that the freaking ocean discourages pursuers in a car, but fire sure will… Like I said earlier, I don’t know if this was a miscommunication between artist and writer, or if this is what Ostrander wanted, but someone should have noticed how ridiculous this and other moments really were.

Colorists and Letterer: Colors were… colorful… but in a comic where the art alone is seeming to have trouble establishing a change in scene, the colors should step it up, and fill this void. They just didn’t here. Nate Piekos has apparently been assigned all Squad comics, which is not a bad thing. The guy has been solid so far, and continues the trend here.

Closing Thoughts: … Underwhelmed…. This comic was a missed opportunity on several fronts to be a solid read. I enjoyed several parts, and Ostrander seems to have a nice grasp on these characters, and the story felt simple and complex at the same time… but the complexities left me feeling lost afterwards. The artists couldn’t decide as to whether they would draw the New 52 costumes, or the Rebirth costumes… So they did a little bit of both. Ostrander struggled the most with Harley Quinn’s voice. She was just pure crazy here, and lacked a bit of personality.

Recommendation: I’d pass on this. It just doesn’t feel worth the money, especially when there is much more quality stuff out there.