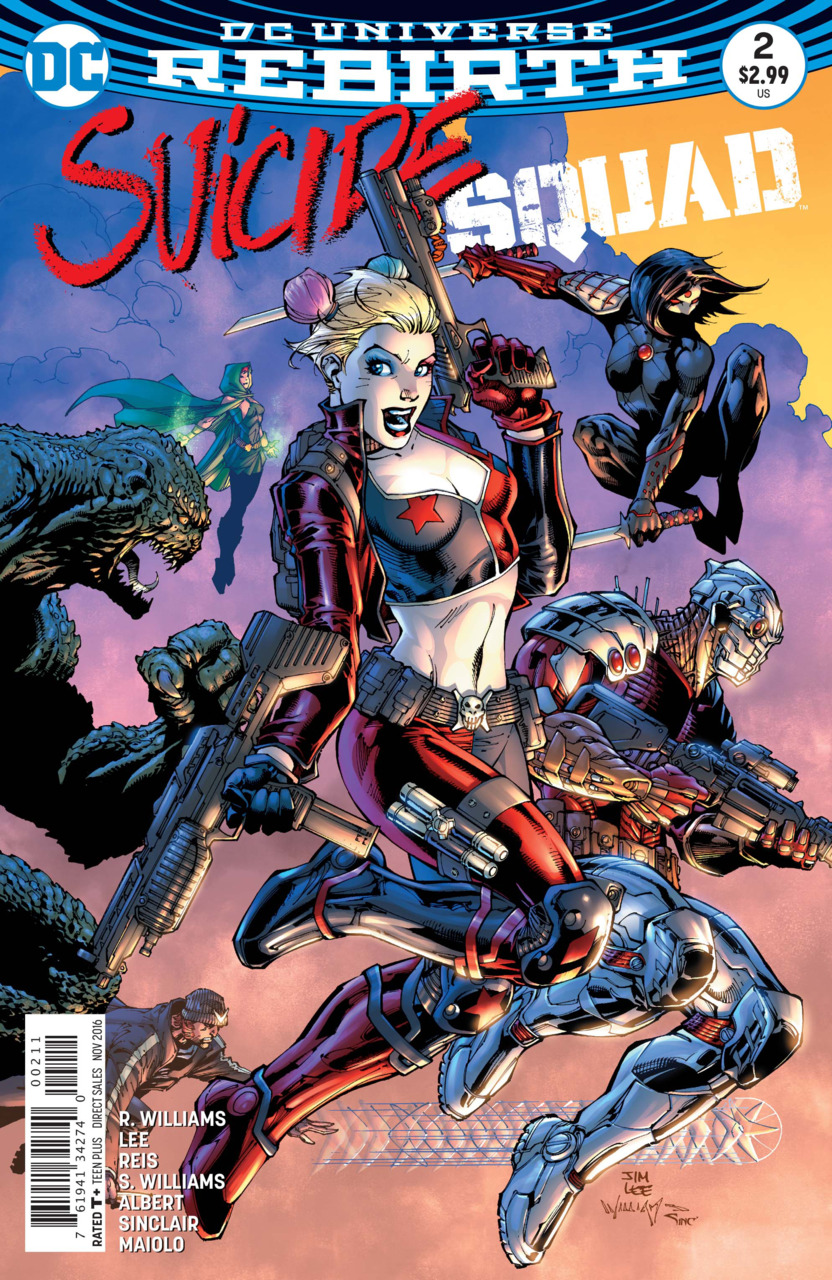 Synopsis: We pick up directly after the events of last issue, where the whole team is underwater, in space suits, most of them drowning. A NSA agent shows up to watch the Squad break into a Russian prison, but is disappointed to see their progress. Waller tells her to have a little faith, as we see the following events unfold.

Flag, Lawton, and Harkness are all hanging onto a particular rocket that they came in on, when Boomerang uses it to blow a hole into the side of the underwater prison. The three make their way inside, thinking that the rest of the team has died. However, Katana ditched her suit, allowing her to use her sword to cut her teammates out, and for Croc to carry her, Harley, and June inside the prison. He starts getting shot at by the prison guards, but thanks to his tough skin, he’s able to do a “fastball special” with Harley and Katana. The two absolutely DESTROY the guards in a pretty funny five panel sequence.

The team reaches a cell, and opens it to find a Harley Quinn fangirl with superpowers named, Hack. Flag tells her that she needs to take them to the Black Vault (the goal of their mission), so she uses her powers to convert the team into the digital world where they find a glowing purple ball. Boomerang goes to touch it, AND GETS DESTROYALATED…. Seriously, all that’s left are his boots. Suddenly this whole team seems a bit under-powered as Zod steps out of the orb.

In the backup story, Amanda Waller is asking Captain Boomerang the question we all ask ourselves… Who the crap made this guy a Captain? In an amazing short story, told by Digger Harkness himself, we find out how he was a secret agent for Australia, but turned to a life of crime after realizing how much more money they make, and how he totally doesn’t have daddy issues… Seriously, I would read a monthly series of Boomerang just telling us of his various adventures.

Script: Rob Williams nails the pacing that lagged down the last issue. I wonder if he was able to adjust to the page count this time, and catered to his artist more here. Whatever the reason, stuff happened this issue, and it was a blast to read. On top of that, the backup story was amazing too. Reading about Captain Boomerang’s past, as told by Captain Boomerang was SO much fun. These backup stories have made me care about these characters more than anything else these guys could have done.

Pencils: I feel like Jim Lee did better this issue. He focused a bit more on storytelling as opposed to pretty splash-pages, and that helps so much when you consider the limited pages he has to work with. The pacing was much improved, and things actually progressed.

Ivan Reis drew the backup story, and he did amazing. I recently went through and read Geoff Johns Aquaman run (which I highly recommend). Ivan was solid on Aquaman, but I feel like he really found his footing when he made the jump to Justice League… I feel like he’s taken another step here. His art is more consistent, his facial features are spot-on, and his storytelling has improved as well.

Inks, Colors, and Letters – Scott Williams inks over Lee’s pencils, and he remains as solid as ever. It impresses me that someone can be so detailed, without overpowering the page with black. Alex Sinclair colors the main story, and he contributes to the cinematic feel to this comic.

Oclair Albert inks the backup, and does a solid job here. I’m not sure if this is a new pairing or if these two have worked together before, but they seemed to flow very well together. What really captured my attention here, though, was Marcelo Maiolo’s colors. They jump off the page with their beautiful vibrancy, you almost forget that you are reading a comic. The flashback panels are amazing with a warm, sunset feel to them. The contrast in the colors makes everything pop, but not so much so that your eyes get an overload.

Nate Piekos letters both stories, and nails both. I really liked the look of Captain Boomerangs captions in the backup story.

Recommendation – Buy! I’m having fun with all the DC Rebirth titles so far, but this is the first comic that I want to read. The dynamic between all the characters is fantastic, and the backup stories have been giving me some nice character moments.