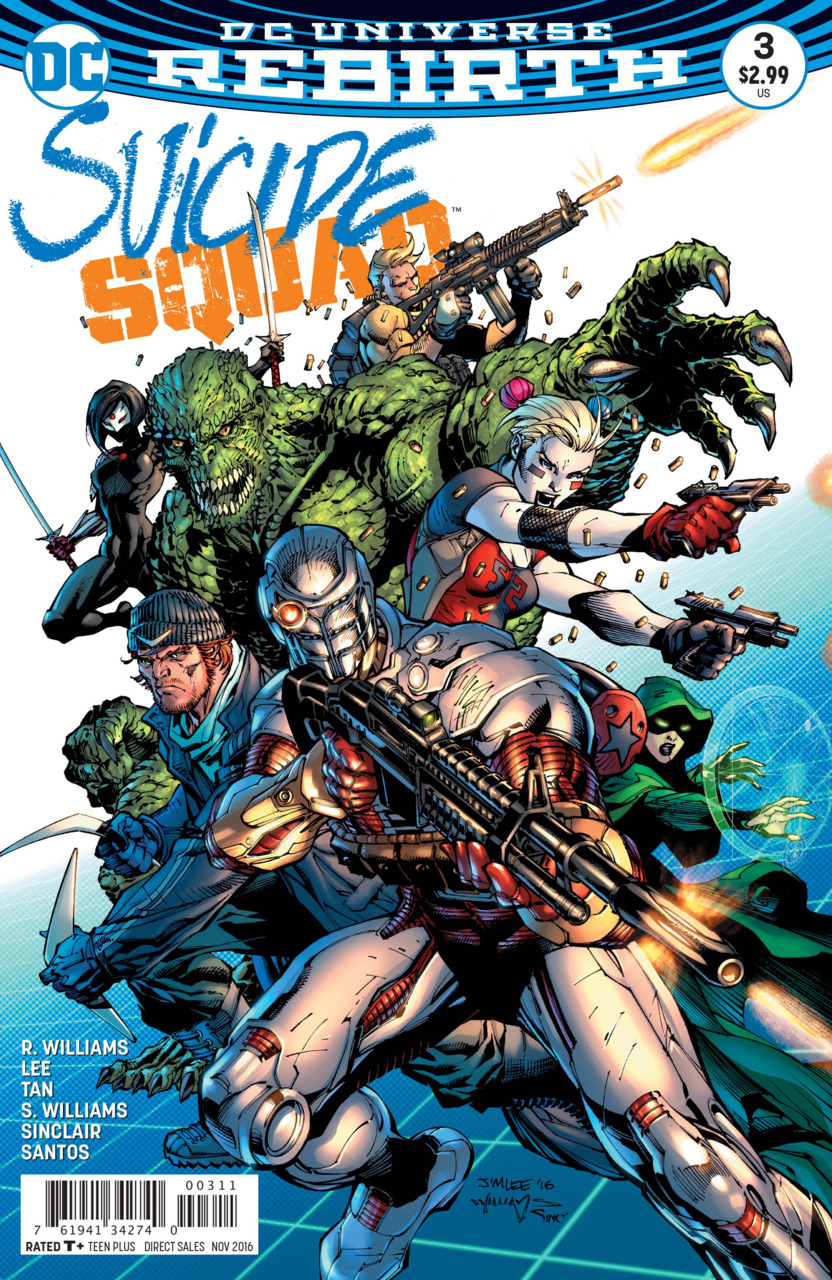 Synopsis: Amanda Waller is telling us why a team like the Suicide Squad is needed, as we see the remains of a city after Darkseid War. We join back with the team as they try to fight off Zod. Not that they stand a chance, they are just trying to distract him long enough to survive.

Enchantress finally shows up and is about to cast a spell, but she goes on a monologue leaving Zod enough time to throw Croc at her, throwing everything off. He then sets his sights on Hack, and Harley volunteers to protect her, but then realizes she’s about to die, and abandons Hack. Katana shows up just in time to hold Zod off from destroying Hack, with the help from her magic sword. This balances the scales and the two trade blows for a while.

Meanwhile, Harley is ditching the crew, when she sees a team of High-Tech Armored Russian Guards coming at them. Hack opens up a weapons cache in the room, which Harley and Deadshot take advantage of by blowing away the guards. But once they clear the hall, the Annihilation Brigade (a group of villains, of whom I couldn’t tell you who any of them are) show up to do some damage.

Script: I wonder if this was a good pairing… Rob Williams shows promise, and I like what he’s doing, but having only eleven or twelve pages to work with just isn’t going to cut it. It just drags things down having this kind of page count. The few pages in the main story just don’t leave enough room for storytelling.

Pencils: Jim Lee’s art looks great, and I’m sure his name is bringing in some good numbers, but I just wish that the format lead to us having a full page count. Now, I don’t mean to sound like a broken record, but it is causing problems for the pacing of every single issue. If that means that we need to get another artist on board, then so be it.

Inks, Colors, and Letters: Scott Willliams inks over Lee’s pencils… This guy does such a great job. His inks are so clean and tight, he make Jim Lee’s work look even better. Alex Sinclair’s colors are showed off here, especially on that last page with the different villains. His palate adds a dynamic to the page that pencils or inks just couldn’t do. Nate Piekos letters here, and is solid, as he has been on this series so far. I especially loved the dialogue box with just a picture of a peanut in it.

Backup Synopsis: In an interview conducted by Amanda Waller, she delves into the background of Katana (Tatsu), trying to determine if she can trust her on the team. We see the tragic background as she is a young woman in Japan, who got married to a wonderful man, and had a family. Until her brother-in-law grew jealous, and began to seek power through a magic sword which ended up driving him mad. In his anger, he destroyed his brother and his family until Tatsu stopped him. The sword chose her over him, changing the tide of the fight, and she kills him. Amanda asks why she joined the team, and she responds, “Something is coming.”

Backup Analysis:  This was a very moving short story, as we see what drives Katana and that she’s not as cold as she seems. Rob Williams captures the spirit of everything that she represents, and continues to tell a more rounded story in the backups than he’s able to do in the main story. These backups continue to be the standout to me every two weeks.

Philip Tan leads the way for this story, and this is the best work I’ve seen him do. When he drew in Suicide Squad: Rebirth #1, I felt like he was trying to mimic Jim Lee and it didn’t work for me. This felt more like his own. It had a more anime style feel too it, with light inks, larger eyes, the focus on the fight choreography. Hopefully when Tan takes over the art duties for this book, it looks more like this, and less like what he did for the Rebirth one-shot. Elmer Santos colored this issue, and this guy has put himself on notice. His colors blew me away with how beautiful they were. He helped contribute to the Japanese anime feel with his cinematic choice of colors. I look forward to seeing what this art team does in the future.