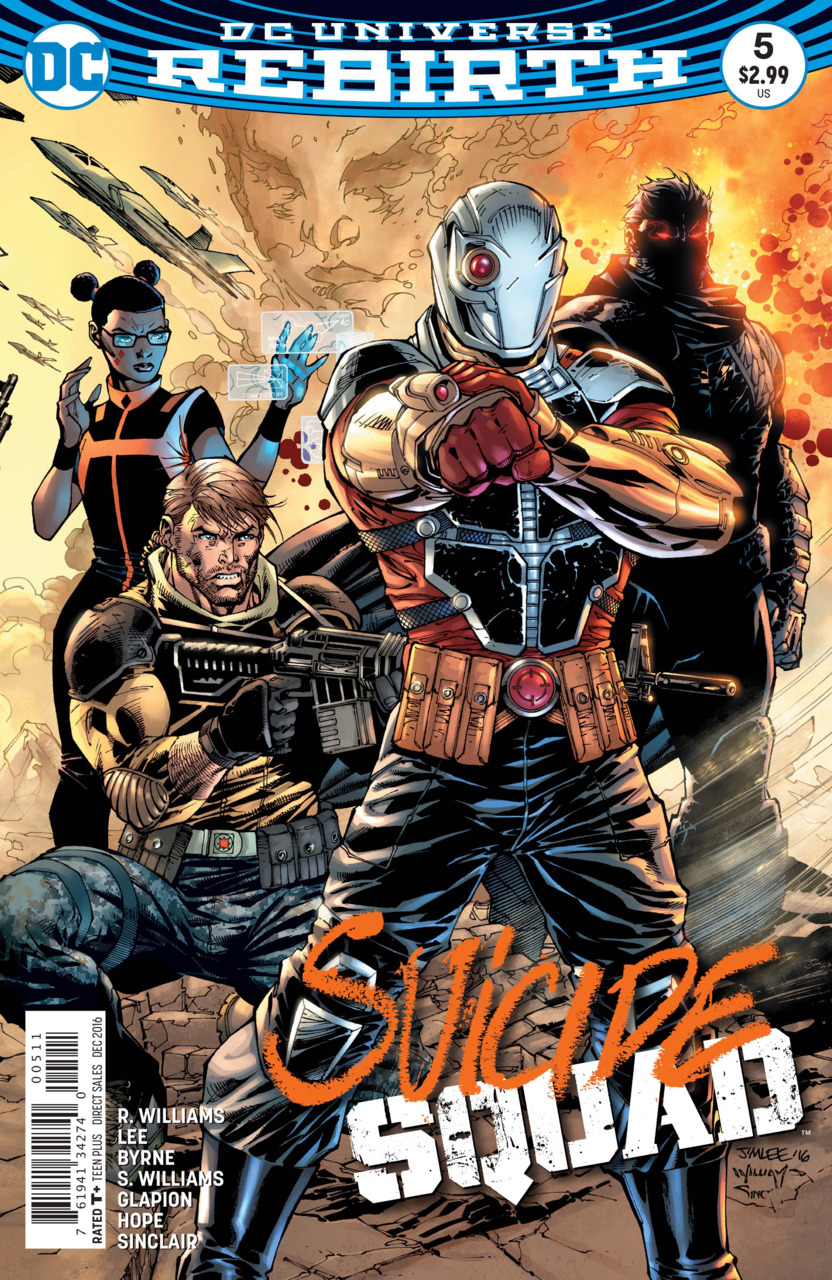 Synopsis: The issue opens with an opening monologue discussing Oppenheimer’s first reaction to the atomic bomb and its comparisons to the first sightings of super beings. In Belle Reve, Task Force X looks on at their most recent achievement of bringing in a sort of phantom zone prison that holds General Zod. Rick Flag openly disapproves of holding the Kryptonian in the prison. He and Waller discuss the recent efforts of other nations to have super powered teams in response to America having Task Force X. As they are arguing, Harley hears something from the “Black Vault” and is drawn to it. Her and Deadshot fight for a moment before Waller partially activates the bombs in their heads to show her control. Waller then leaves after ordering the scientists to find a way to pull the Kryptonian out of the Black Vault and find a way to control him.

While in the cafeteria, another prisoner named Hack offers her help to breaking Task Force X out of prison but admits she still does not know how to disable their nano bombs. Harley Quinn dismisses her and calls her useless then.

In a different cell, Zod is being held while being bathed in red sunlight and injected with sedatives. Flag and Waller are discussing his potential with an NSA liaison named Harcourt. They also bring up the fact that when they got Task Force X out of the Russian prison they also took a meta human named Hack who could turn any matter into digital information. While they are discussing her abilities, Hack seems to be undergoing some change and feels an outside presence invading her mind.

Waller and Flag begin to argue again over Zod. Waller thinks that Zod would be a real asset to the Suicide Squad once he is under her control. Flag can’t believe she is entertaining this after Zod killed Boomerang and his potential to kill thousands. The issue ends with Flag drawing his sidearm and aiming at a confused Waller and pulling the trigger.

In the backup story, Waller interviews Hack and attempts to find out why she was drawn to Belle Reve given her immense power. Hack tells her story and how she grew up in poverty and her brother was killed by local criminals. When she was working with computers one day, she was transported into the digital world and found out how much power she had. She used that to avenge her brother then she was eventually captured by the Russians. Hack says she was inspired by Harley Quinn who appeared to be so free and that’s what she wanted. During their interview, Hack starts to break into the Belle Reve mainframe and read up on Waller’s history. She is shocked by what she sees and is about to apologize when Waller electrocutes her. Waller leaves by saying she wasted her potential and now she should just enjoy her prison time.

Thoughts: I have to agree with Corbin for his recent reviews on how the pacing seems slow in these issues. I was amazed when the back up started because I could not believe how short the main story was. Now, I did enjoy the back up but I was hoping for the main title to move along a little more.

As far as the writing goes, the dialogue seems solid for the most part except one scene with Harley Quinn and Hack. Harley seems way too matter of fact and sane while telling Hack she does not want to get involved with the Suicide Squad. It just felt more like something Deadshot would say. It was only a slight issue but it bothered me a little.

The artwork is great of course. I don’t think anyone had doubts about Jim Lee being solid with his pencils. Although if they are the reason for these short main stories in the pages, which I’m sure they are, then I do think that’s a problem. Overall, I do like the inclusion of Zod as a potential pawn of Waller as ridiculous as her idea is to control a Kryptonian. It makes for a good threat and certainly sets the stage for the coming Justice League vs Suicide Squad storyline.