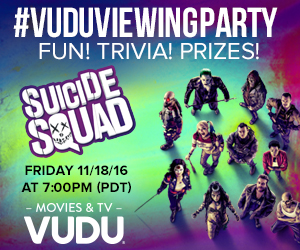 The Batman Universe has teamed with VUDU to celebrate the release of Suicide Squad in digital format. The film releases November 15, but on Friday, November 18, Bat-Fans from around the world will join up in a special viewing party.

What does this mean for you? If you purchase the film digitally, you can join in on engaging in online banter, reactions and trivia contests for the duration of the movie. It’s fun, it’s fast, and it’s an experience you won’t soon forget. There are also prizes that will be given away to select fans participating.

In addition to that, there is another great prize opportunity comes in the form of the Squad quiz! Fans who answer at least six trivia questions correctly will be entered into a random drawing. One grand prize winner will receive a pair of Suicide Squad statues, a digital movie bundle and a Suicide Squad prize pack!

And to top all of that off, we here at TBU will be giving away ten codes for fans to get their hands on both the theatrical and extended versions of the film. All you need to do to enter for a chance to win the film digitally is email us at contest@thebatmanuniverse.net with your name and email address (codes will only work within the US). We will select ten winners at random on Monday night (contest closes 11:59PM CST November 14) and then we will send the codes over Tuesday morning for you to redeem. While you do not need to participate in the viewing party, it is strongly encouraged!

If you are not one of lucky winners of the free code, you will still be able to purchase the film digitally and participate in the viewing party on November 18. You can pre-order the film now by heading over to VUDU. All of the details for the viewing party can be found by RSVP for the event. And if you want to enter the contest for the trivia contest, you can head over there now and answer the questions to submit your entry into the contest.