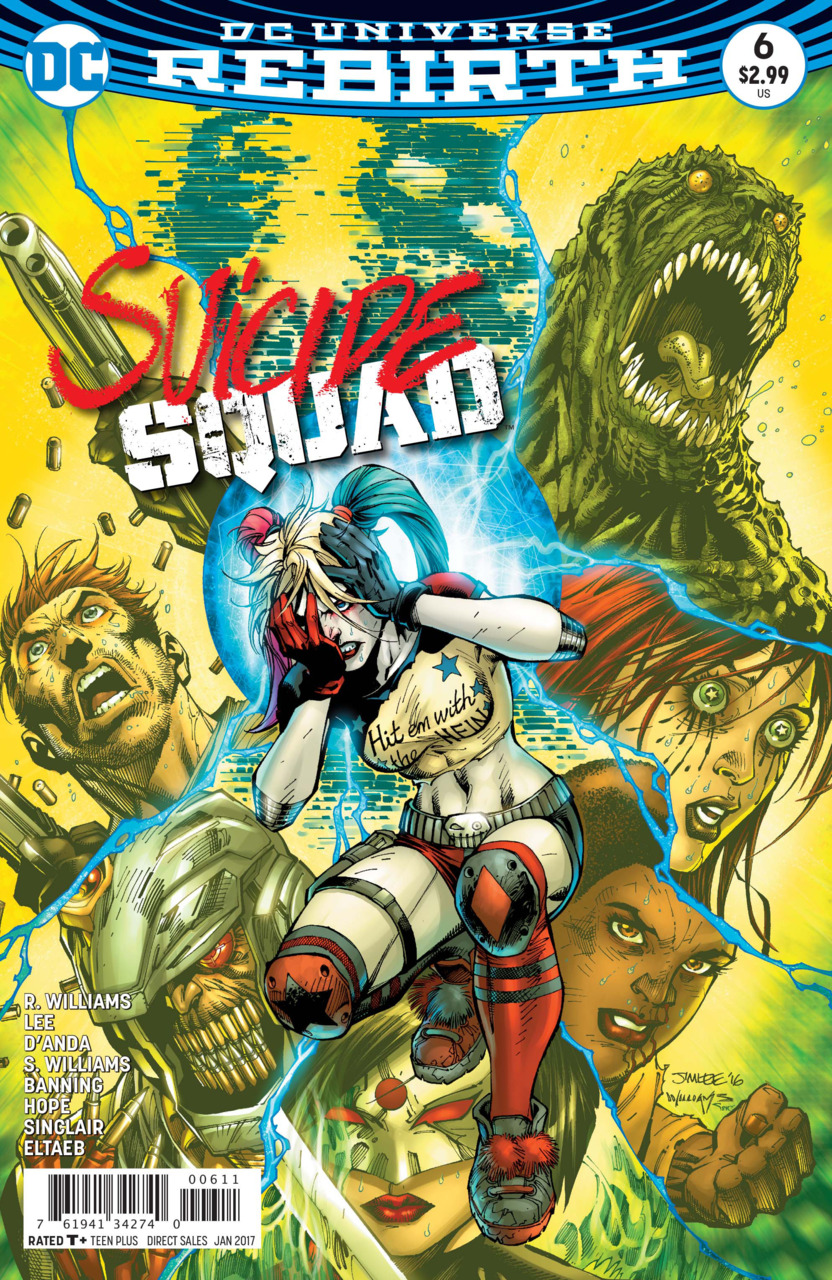 Synopsis: As we pick up up this issue, Flag is firing his gun at Waller, who takes the shot right to the head and dies… And that’s the end of the Suicide Squad! Thank you and goodnight!

… But it was all some trippy hallucination, as Katana saved Waller by deflecting the bullet with her sword. Flag realizes that Waller is still alive, and is super confused. Waller goes kinda nuts, beats the crap out of Flag, and challenges anyone else who wants to take her on.

Downstairs in the Black Vault, sits Zod who is strapped to a dissecting chair — depowered by red sun rays and doped up with drugs to keep him under. Surrounding Waller, Flag and Katana are a bunch of scientists who are currently trying to kill each other.

Down at the cafeteria, Harley is mentioning the weird tune that she heard the Black Vault making last issue, when the power at Belle Reve goes out, leaving everyone in the dark. Back is approaching Deadshot and Harley and is about to tell them that she saw something, when the prison guards taze her and carry her off because ‘Harcourt wants to interrogate her.’ Harley picks up Hack’s glasses that they left behind.

The power comes back on, and Katana gives in to the wishes of the sword, who wants to just kill people now… thankfully, she goes out of her way to decapitate some no-name scientists. Elsewhere, June Moon escapes her cell, but so has Croc, and he pretends to bite her beck.

Hack wakes up in the room where they insert the bomb implants. A digital, zombie Captain Boomerang is threatening her, until he looses his form and the power cuts out again. The scientists are still going crazy, and as soon as Waller mentions how they will be okay because of the red sun rays keeping Zod down… a scientist runs over and punches the controls, changing it from red sun rays to yellow…

Harley puts on a lab coat, Hack’s glasses, and puts her hair in a bun, AND SHE’S SANE AGAIN!… However, everyone else has now gone insane, and Katana is about to decapitate Harley.

Thoughts: This issue is all over the place for me. I liked the character moments we got in the cafeteria, but ninety percent of this issue was fighting. I need a little more substance than that. Especially in only twelve pages of story. Harley was a standout this issue, as we get to see a side of her we haven’t seen in quite a long time. And Katana definitely shows us that she could easily be the most dangerous person on the team. She’s a freaking samurai and a ninja all rolled into one. Williams did a good job of subtlety hinting at this in last issue and even throughout this issue before the reveal of what was really going on.

Lee does well here, but again (and I know I sound like a broken record) I still blame him for the pacing. I’m starting to notice that the book is still catching up with him, though, as the backgrounds had no background to them at all. And that’s not just a stylistic choice, because it’s not consistent enough to consider that. Scott Williams, Sandra Hope, Matt Banning, and Jim Lee all ink here. I’m not sure where they change hands, so that’s a good thing. The group did a much better job at being consistent here than they did two weeks ago. Alex Sinclair does coloring duties here, and does a lot of background color shading to make up for Lee’s lack of time. He kinda saves his butt here, making it almost not noticeable. Pat Brosseau letters here, and does a good job. No major hiccups that I could tell.

Backup Synopsis: Waller is interviewing Waylon Jones (AKA – Killer Croc), as he’s had trouble not eating his prison guards. I mean seriously, he’s on his fourth one of the year. Waller tries to draw out of him that he’s not the monster he makes himself out to be.

She goes over his childhood in Florida (I thought he was from Louisiana, but not that big of a deal, I guess) where he was picked on because of the way he looked. A girl his age (Emma) was kind to him, and they became friends.

A friend of theirs goes missing, and using his heightened sense of smell, Waylon finds the boy’s body. But it’s too late. He’s dead. At that moment, a crocodile attacks them, but Waylon fights off the animal. At some point during the fright, Emma was killed. Now, not only is Waylon upset over the death of his friend, but the police show up and believe that he killed her. Thus leading to the hardened man before us today.

Backup Analysis: Waylon Jones has had one of the most interesting character arcs since the New 52 started. Really, go back to before, and he’s just a monster. Since the relaunch, though, he has had a lot of deep character development. This story continues that thread — that there is more to this guy than there appears to be. Carlos D’Anda is the artist here, and he has a beautiful style that fit this story well. He has a cartoony style that exaggerates people’s features, and gives them personality as soon as you see them. He also draws an adorable kid Waylon. He also draws a terrifying crocodile and a morbid, bloody, messed-up, heartbreaking scene as well. Gabe Eltaeb colors this story, and he adds to D’Anda’s style. Some colors look as if the page is emitting light, they are so dynamic. Josh Reed letters this story, and I liked how he did Waylon’s dialogue. It really caught your attention, putting a voice to the work immediately without any effort on the reader’s part.