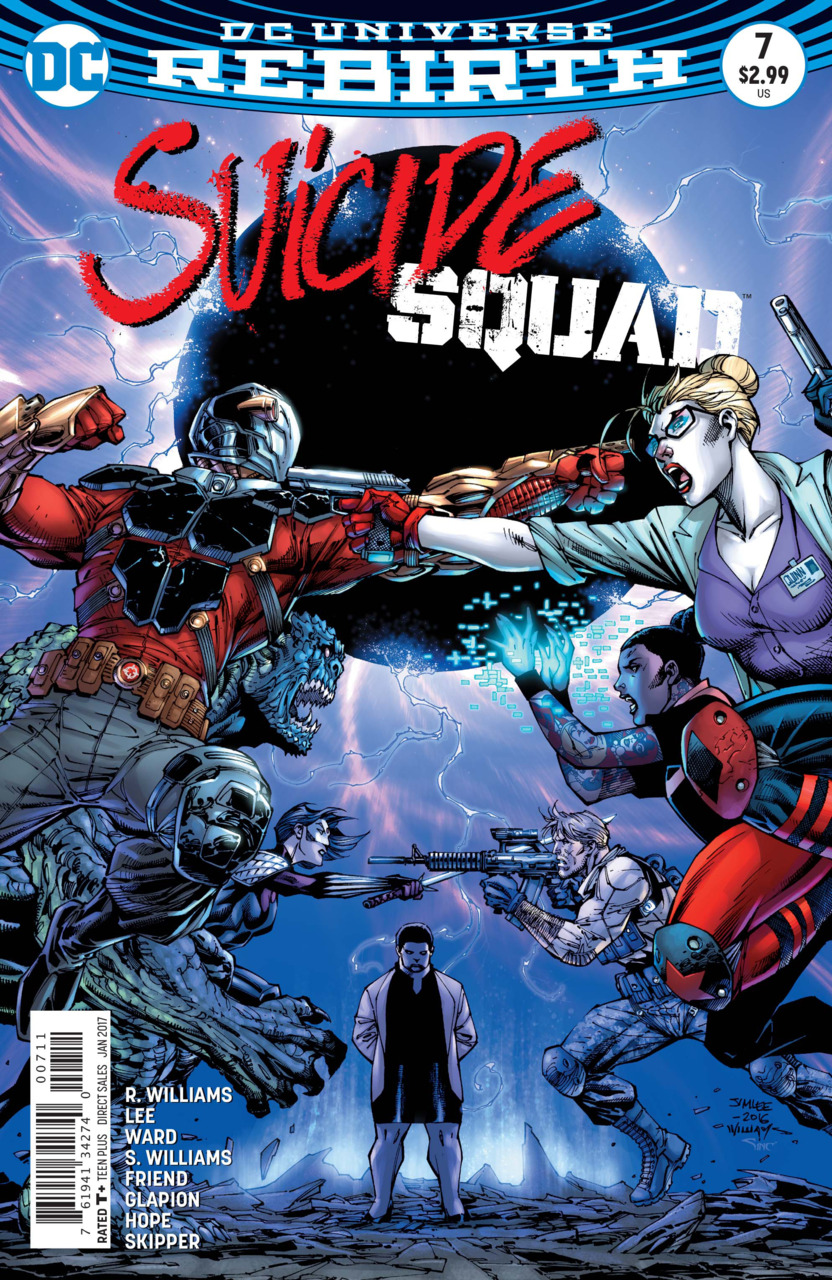 Synopsis: Dr. Harleen Quinzel is running for her life as a crazed Katana chases after her trying to kill her. Harleen runs past a guard, who tries to taser her. Katana dis-arms him (ha!), and Harleen picks up the taser with the arm still attached and shocks Katana, taking her down.

Quinzel gets ahold of Waller, who is struggling to maintain her control. Waller tells her that she needs to get to the lab and shut down the yellow light before Zod is powered up. The lab is next to Croc’s cell. She thinks and fights her way through the crazed prison-mates by turning on the sprinkler system, and then jumping in the air, shooting the taser into the ground. The shock goes through the water, knocking out everyone in the room.

She finds her way to Croc’s cell, and sees that he and June Moon have just got done…. doing the nasty. She realizes that the sphere makes them give in to their base urges. Harley shocks June, intentionally trying to awake the Enchantress… but this also wakes Croc. He pins her against the wall because she hurt the woman he loves.

Hack is trying to fight off the urges the sphere is giving her. She enters the digital world, realizing that it’s infecting everyone like a computer virus. It’s something that Hack left in their last mission… Captain Boomerang.

Thoughts: Like all the other issues, the page count doesn’t do this comic any favors. This one seemed to be faster paced, and more enjoyable than the last few issues, but it still has the same problems. There are multiple inkers again this issue, and I only noticed a change for a few pages. Jeremiah Skipper colors this issue instead of Sinclair, and I didn’t even notice there was a change. The guy did a great job filling in.

Backup Synopsis: The US Government is trying to figure out a situation. General Marvin is trapped inside his house… and the house is bleeding. Amanda Waller calls for the Enchantress, and she makes her way inside. She finds the General, sitting in his chair, zoned out with a demon sitting on top of his head. The two recognize each other, and Enchantress asks the demon to use his dark magic while she is in her human form to remove the bomb implanted in her brain so that Waller can’t kill her. The demon agrees, and she turns back to June. However, June is able to fight back. She’s learned some magic by having a witch trapped inside her head. She uses that to knock him down, and then by destroying him. The house goes back to normal. The General is sitting in his chair, in a stupor. He strangled a woman, whom I assume to be his wife, to death. June walks out of the house, and informs Amanda Waller.

Backup Analysis: This story was great. The backup features are still the best stories in this comic. I hope that they collect the issues together. Christian Ward does the art and colors. Looking at his past stuff, I didn’t think I would like his work, but it ended up being pretty good. There were some inconsistencies at times, but it was still well done even in those moments.