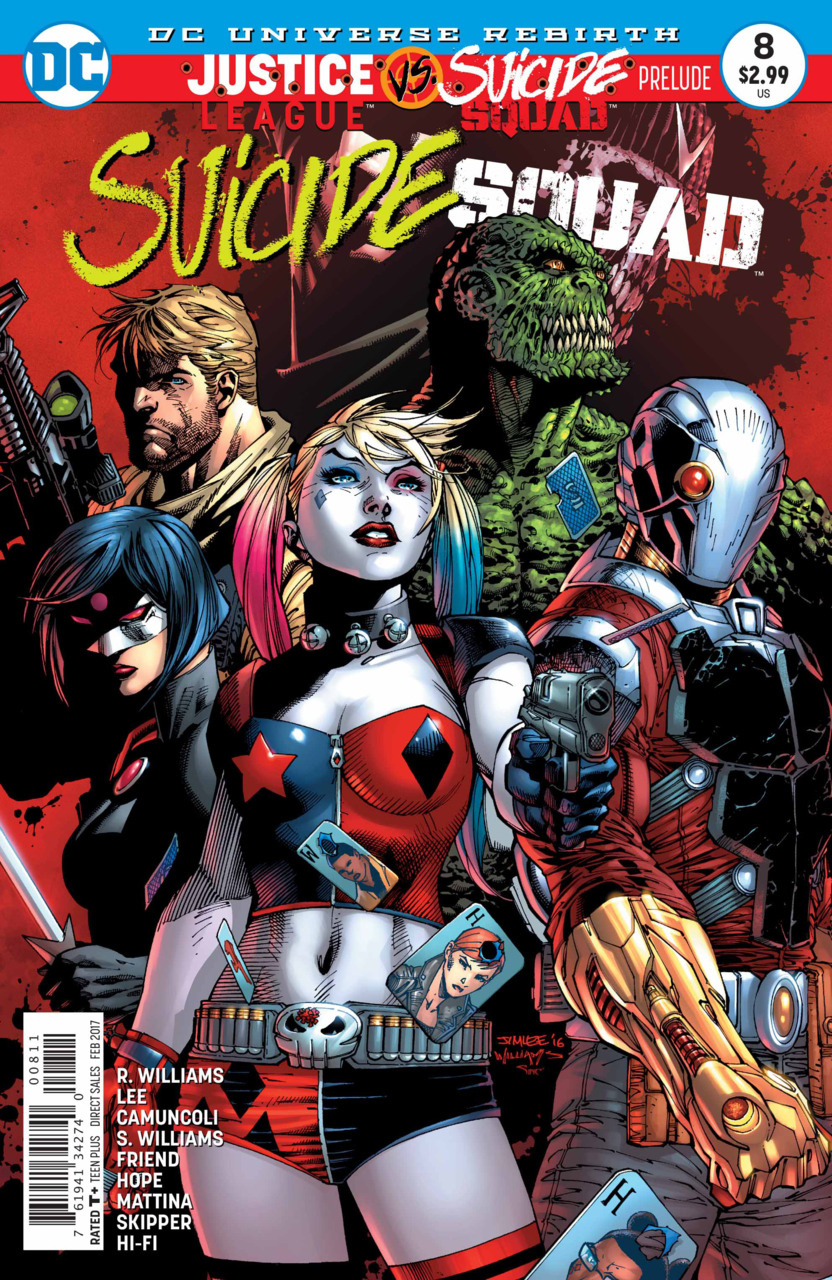 Synopsis: We pick up where we left off last issue, with Belle Reve going crazy and General Zod continuing to lay in the tanning booth. Harley has interrupted post-coitus snuggling between Croc and June Moone by tasing her while she was asleep. Croc responds the way most of us would if a crazy woman snuck into your room in the middle of the night and tased your girl, hoping to bring out the demon/witch from another dimension hidden inside of her… he tries to eat her face.

American hero Rick Flag shows up. He’s just fighting off the insanity by good old American milk and a knife in the thigh to keep his adrenaline up. He shouts ‘Murcia!’ and ricochets a few rounds off of Croc’s bulletproof skin before threatening to bury one deep into his nasal cavity. Moone comes to, and surrenders herself to the Enchantress as Waller and the NSA agent Harcourt make their way to Zod, who is so swoll from all the yellow sun energy (wish my workouts worked out like that). Enchantress doesn’t take the same liking to Croc that June has, and encases him in a giant ice cube before he touches her. Harley tells Enchantress to take her to Zod’s lab. When she asks why she should listen to Harley, Flag tells her that he’ll ‘change the channel’ while holding up a remote detonator.

Elsewhere, Hack is talking to Boomerang, who is starting to believe that he died and became god… Katana, followed by her groupie prison-mates charge into the room after Hack, and Boomerang protects her by making the machines attack the riot. Flag tells Harley to go, that he’ll hold off the inmates. They begin to share a moment together until the “other couple” (Croc and Enchantress) take Quinn and run off while Flag shoots wildly at the crowd. The three smash into Zod’s lab and Waller steals an idea she got from a Spongebob episode and tries “PUSH [ZOD] SOMEWHERE ELSE!” AKA, back into the Phantom Zone. Zod wakes up before they can do this, however, and punches Croc in the face. He then sucks all the air out of the room, suffocating the mouth-breathers, and attempts to throw Amanda Waller into the Phantom Zone, all while giving a monologue in the third person… Seriously, it’s the worst. Thankfully for us, Quinn watched Superman: The Animated Series. She knows that electricity was one of Superman’s weaknesses. So she shocks the crap out of him while Hack turns the red sun energy back on, and downloads a virus – Captain Boomerang. Boomerang gloats in the face of General Zod, as he takes all the credit for defeating him. He chucks a Boomerang at him, which bounces off of his chest. He tells him that the mountains of Krypton will shake before his might and that it’s not Captain Boomerang anymore, it’s GENERAL Boomerang. Zod just collapses onto Boomerang, embarrassing him even more while Hack takes a selfie with all this going on behind her. The Black Sphere is locked away, and everyone reverts back to their normal selves.

Thoughts: This was the most fun I’ve had with this comic. I didn’t realize how bonkers-insane this issue sounded until I was recapping it… Seriously, recap this issue to a friend, and see if you can get through it without laughing. The story was entertaining, is what I’m getting at. At times, it felt like it was being a cheesy action movie, and I loved it for that. The art was on point, and the story seemed to be a few pages longer than past issues have been. The colors remained consistent with the rest of the series, and the letters were solid throughout this whole run. This wasn’t a great story arc, but it ended with its strongest issue, and for that I need to give it credit. I’m very much looking forward to the future issues of this book seeing who the new art team is, and I encourage you guys to jump on board at the next opportunity.

Backup Synopsis: It’s cold in Belle Reve, Louisiana… colder than usual. Rick Flag, Katana, and the prison guards are all wearing special insulated suits to protect them from a new inmate, who is being flown in now. Killer Frost steps out, as Flag describes her in the most accurate way I could imagine – she’s a Heat Vampire. She drains you of your heat source, and transmutes it into ice projections. Flag takes her through Belle Steve Penitentiary and directs her to her cell. On her way there, she is introduced to some of the team members: Deadshot, who has a cold heart. Harley Quinn, who is hanging upside down. Killer Croc, who looks tasty. June Moone, who’s heart is black. And Captain Boomerang, who is sitting on the toilet. She gets to El Diablo, and her mouth begins to water. They escort her to a particular room. The coldest room in the buiding. Where she has no heat to drain. Amanda Waller waits for her with the bomb implant, and invites her to the team. Frost, however, can’t find any warmth inside Waller’s heart.

Backup Analysis: This backup was completely different. In that, it wasn’t giving you background information on a character on the team. It’s giving you a prelude for what is to come from the perspective of a character that hasn’t been on the team thus far. The story was solid, as we get to know what type of person Caitlin Snow is. I appreciate the TV show The Flash, but I find this interpretation of the character to be much more interesting. They likened her powers to Vampirism. She has to fight her urges with the person she is underneath it all, giving us a morally complex character. The art team does a great job with their storytelling, as it’s very easy to follow along here. And it ends strong as well, making me very excited for the first crossover for Rebirth.