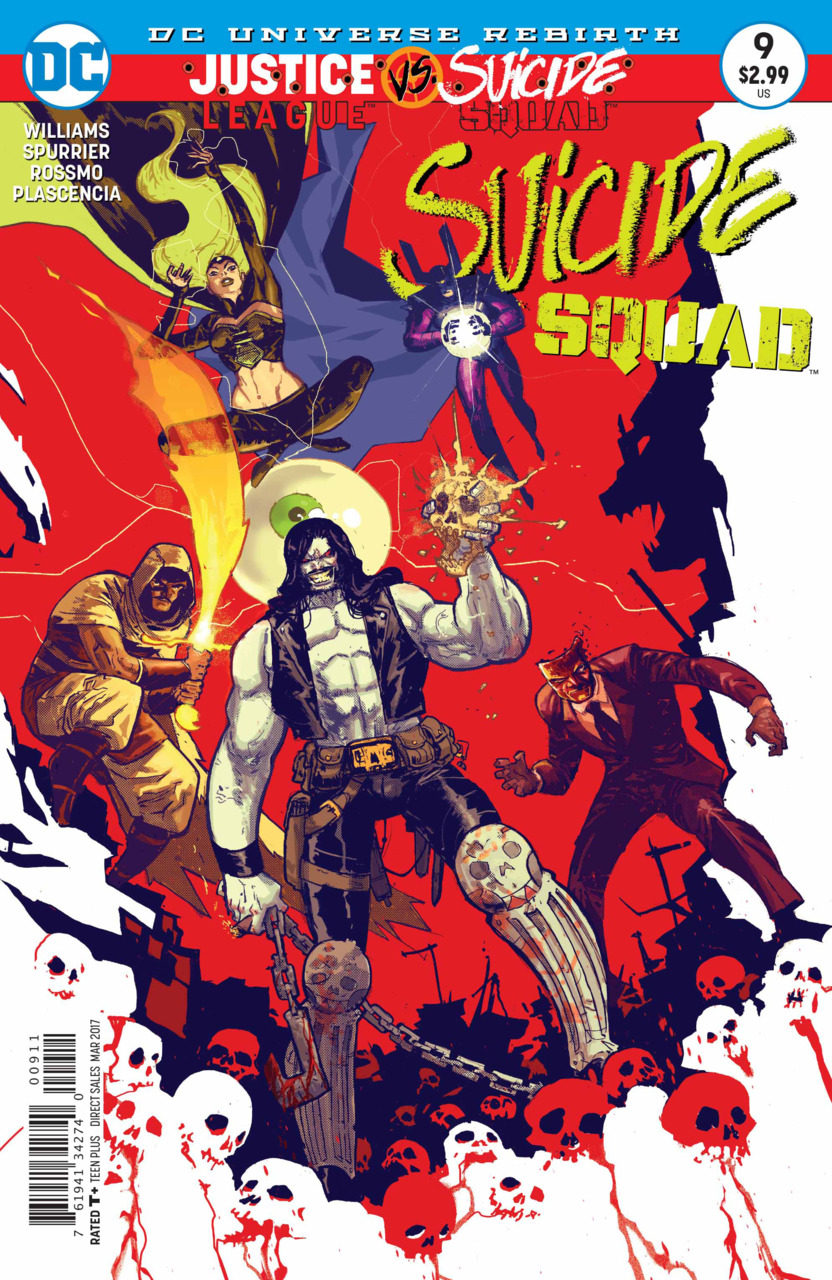 Synopsis: Amanda Waller is briefing her team on their current situation and what their mission will be. The dictator of Jangsun (an island just south of Japan) released video footage showing a new weapons test for intimidation purposes. Their dictator, Young, is just crazy enough to do something with his new weapons, as he is threatening every country every other week. As a response, Waller is sending her team out on their first high profile mission… turns out, it’s not the team we’ve grown accustomed to seeing.

It’s the group that’s causing so much trouble in the main event; Rustam, Emerald Empress, Doctor Polaris, Johnny Sorrow and Lobo. Waller assigns them to destroy Young’s weapons, dubbed Jansung Gods, as well as wiping out the technology that allows them to create more “Gods”. The current arrangement is, they do jobs like this for the U.S. Government, they get whatever their heart’s desire. They get caught, and the government denies their involvement, and they serve jail time for their crimes.

This is the point when Cyclotron pipes up… in case you are wondering why you’ve never heard of this guy, well he did just join the Suicide Squad, so use your imagination. The others kinda make fun of the guy because he’s such a no-name. Rustam wonders why Waller didn’t tell him about this guy, and Waller tells them that they can get to know each other on the ride over.

They airdrop the team onto the island, and the crew gets to work killing the Jansung Gods. Rustam is soon successful, and decapitates one of the Gods. When he does so, hundreds of people die instantly. Johnny Sorrow says that the civilians are connected to these Gods, and to kill them, means to kill off hundreds of civilians as well. Waller calls off the mission until they can figure out a different approach. Lobo and Johnny Sorrow want their agreed upon payment, which they won’t receive if they don’t fulfill their end of the bargain. So the entire team lays waist to the rest of the Gods, and then make their way to the palace. They find the dictator, whom Lobo kills by flicking his finger into his face. They find the god maker, which uses human life as fuel to create puppet gods. Waller orders them to destroy it, but… new guy – Cyclotron – has an idea. They use the device on themselves. Become more powerful than ever before. Waller has nothing on them.

Rustam tries to take back them team; get them back on track, but fails. Lobo walks out. He doesn’t want to be a god. He just wants a crapton of money. Johnny Sorrow, Emerald Empress, Doctor Polaris, and Cyclotron decide to use the device. Waller radios in to Lobo, telling him that she’ll double his pay if he kills Cyclotron. Lobo struts back into the building and guts the dude right in front of everyone… except the guy starts glowing… He was a walking bomb the whole time. A failsafe in case the team got out of hand. The team has nowhere to go, and Cyclotron explodes, taking a good chunk of the city with him. The U.S. Military shows up, and retrieves the members of the team. It seems that Doctor Polaris was able to protect the team for the most part, but the explosion still left everyone unconscious.

As far as the world was concerned the US was not involved, preventing the start of a war. Waller decided that the team was just too powerful, too erratic, too dangerous… while Rustam (the poor guy) just knew too much. For now on, control would be a major part in the Suicide Squad. The bomb worked well… maybe that could be promising. All in all, Amanda sees the team as a success, and something she could build on to do some good in the world.

Thoughts: I really liked this issue. I felt like this was a great way for Rob Williams to jump in, and add a tie-in issue to the Justice League vs Suicide Squad without railroading anything that could be happening in the main series, but still give Williams a meaningful addition. He took full advantage, and gave us an entertaining story. I love Riley Rossmo’s art. I know some people take issue with how his anatomy is, but I have no problems with anatomy as long as it’s a stylistic choice. I think his work is gorgeous. His character work, acting, and facial expressions are some of his best attributes as an artist. Ivan Plascencia colors his work, as he usually does, and matches his style so perfectly. I’d love a Lobo series done by this team… that would be so amazing. Pat Brosseau letters this issue, and is as solid as he has been the last few issues.

It’s a great sign to see how great this book can be when you have the full page count to work with, and I hope this is a sign of things to come.

I haven’t heard who the new series artist will be, so if you know, let me know in the comments. I’m anxious to see what the tone of the book is going to be.