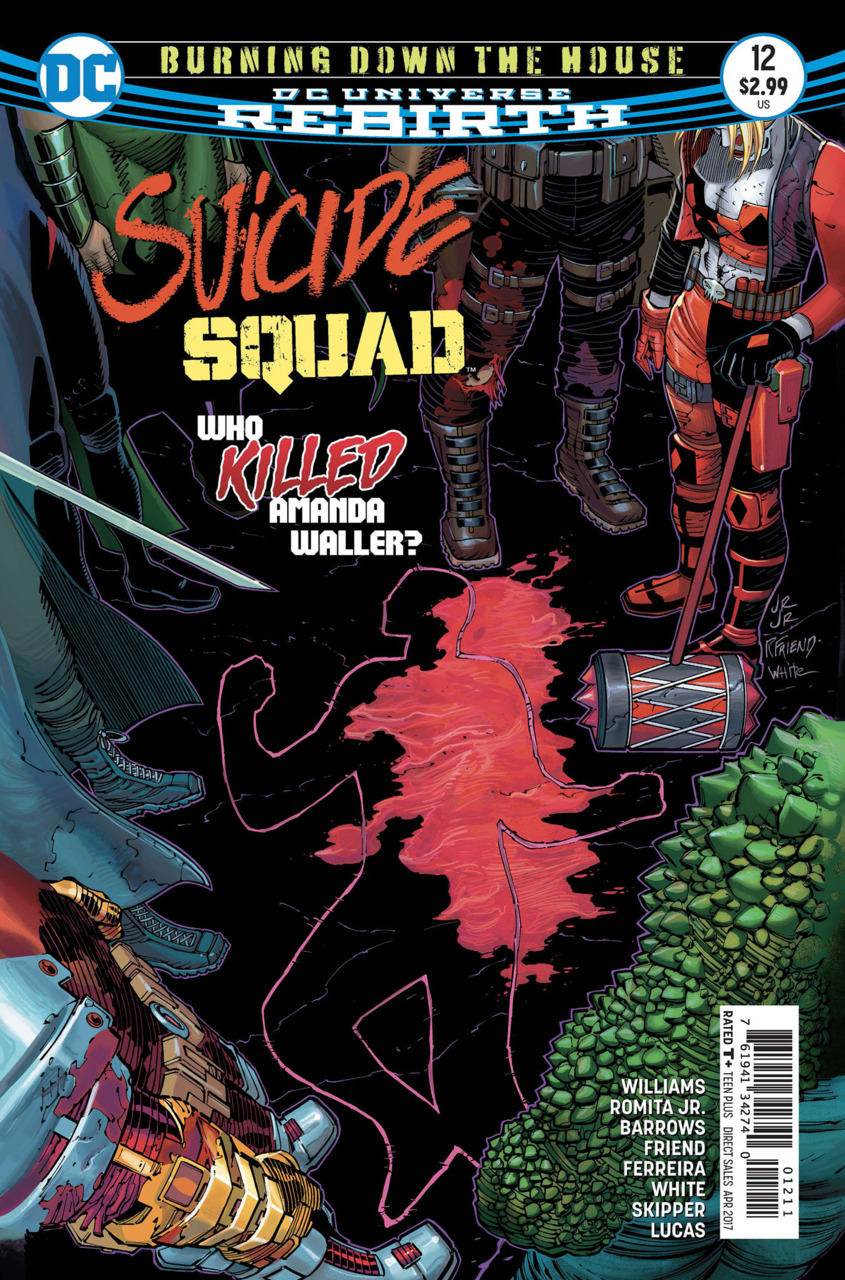 “Shot to the heart,
And you’re to blame.
Darlin, you give love
A bad name.”
(Guitar rift)

Synopsis: An ambulance raced Amanda Waller to the hospital after receiving a bullet to the heart. She’s bleeding out, and doesn’t have much time left. She left protocols in place for National Security Guards to protect her while she stays in the hospital. Waller narrates the moment, saying she’ll die as she lived… in control.

Rustam is continuing his anarchy at Blackgate, letting all the prisoners loose. Some guards approach to take him down, and he teleports elsewhere in the prison. He releases a friend of his named Djinn and orders him to release some more of their “friends”.

The Squad are in a digital realm thanks to Hack, and receive a call from Harcourt. Getting word that Rustam is at Blackgate, they begin to head that way. However, Djinn runs into them, quickly explains that he is a stronger, more experienced version of Hack, destroys her, and pulls the rest of the team out.

Rustam and his team stand before the Suicide Squad, and they have their showdown on the floor of Blackgate Penitentiary. The Squad get their butts kicked, and lose Flag and Katana in a portal created by Rustam. Rustam gets news of Waller’s death due to Djinn’s connection to the internet. He leaves, wanting to find out which one on the Squad killed her.

Analysis: Now, I fully suspect that Amanda Waller is still alive. Her monologue that she is in control in death, just as she was in life gives me reason to think she is somehow faking her death for a yet-to-be-revealed reason.

Williams’ writing is still okay… the pacing was decent for the most part, and then the fight scene at the end was a bit longer than necessary. Now, this isn’t a problem if this story is twenty pages long, but in a ten page comic, it bogs things down. John Romita Jr.’s art is fantastic here. It may have felt a little rushed last issue, but I feel like it looks better here. There was one point when a character was said to be connected to a tiger… but he was drawn to look like a lion… I don’t know if this was a mistake on the writer’s part, or if Romita doesn’t know his animals very well, but regardless; Rob Williams should have fixed this even if Romita drew the wrong thing. I’m putting it on Williams. I’m really liking Richard Friend’s inks with Romita. There was just one face on one panel I felt like he did a bit too much with, but it looks great overall. Dean White’s colors are gorgeous! Jeremiah Skipper’s pages though… they don’t look so great. Now I understand why they did it. It’s during the pages in the digital realm. It adds a different atmosphere, and lets you know you aren’t in Kansas anymore. But compared with White, these pages just look like garbage. White is skilled enough, I’m sure you could have gotten him to do something creative. Pat Brosseau remains consistent in his lettering, and has found creative ways to do character’s dialogue and monologue boxes.

Secondary Synopsis: Harcourt attends the funeral of Amanda Waller, along with Waller’s three surviving children. Coretta is upset that she gave her whole life for the country, and she doesn’t get the same respect as a soldier.

Back at Belle Reve, Harcourt is talking to Hack, telling her to trust no one on the team. She believes one of them is the killer. She interviews all of them. Ending with Hack, whom she seems to have no qualms opening up to. Hack excuses herself to transfer to files over to Harley, who is trying to figure this whole thing out. Their first suspect – Deadshot.

Secondary Analysis: I want to take a moment to think about this case on who killed Waller… A gunshot to the chest… that’s not really Croc, Enchantress, or Captain Boomerang’s MO. Most noticeably out of the group, Deadshot has a decent alibi; he was with his daughter. However, he has a good reason to kill Waller, and it was a skilled shot to the heart… But I can’t help but think of Hip-Hop artist, Drake – “Why would I put on a vest? I expect ya to aim for the head.” As for Harley, although this isn’t her style of kill at all, she is extremely suspicious. I just feel like if she did it, she would 1) do it with a little more blatancy and pizzazz and 2) not actively trying to solve who killed Amanda Waller. Harcourt is the one who benefits the most from Waller’s death, as she gets control of Task Force X like she wanted, while the other members of the team are still on the team. And yes, while she is also trying to solve who did it, she could be trying to pin the murder on one of the known criminals on the team.

Rob Williams does a better job in the second half of his story. I feel like it’s part of the story he’s more interested in, and so he’s putting a little more work into it. Eddy Barrows’ work here is amazing. The way this guy draws people… the detail he puts in their faces just blows me away. There were a few panels where he’s trying to continue the painted feel that he did in Detective Comics, but it felt unnecessary to me (I’m talking about the Harley panels at the end). Eber Ferreira inks here, and does a fantastic job. His lines are very thin and real smooth, giving contrast, yet letting the color do its thing. The standout to me here was Adriano Lucas on colors. The guy really cuts loose here, establishing the right mood in the first few pages, keeping up with the continuity of where things are later, and having the huevos to do grey tones only in a flashback scene.