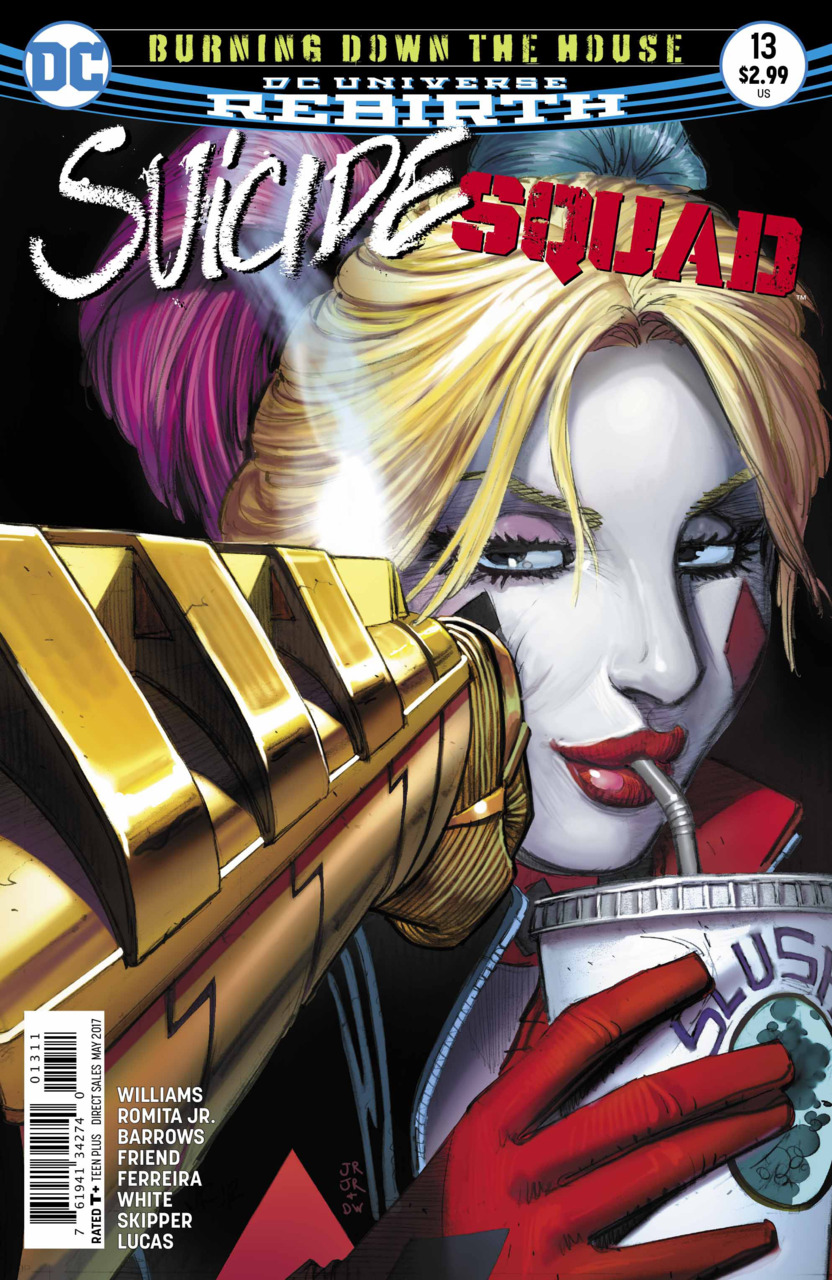 Synopsis: In an unknown area, we are in Rustam’s hidden base. There, Katana and Rick Flag are held prisoner. Beaten and bloodied, they wait. Flag reaches for Katana’s sword, but it’s just out of reach… but it begins speaking to him. It tells him that he will die a hero in the darkness at the hands of the Harlequin. Before he can react, Rustam walks up behind him and breaks the news of Waller’s death. He tells Flag of how Waller set up the whole thing. She advised the government to detain Flag in Guantanamo Bay… she then used that against him so he would lead her Task Force X. She did that with all of them. Rustam has an offer for the whole Suicide Squad; join his rebellion, and fight against corruption…

Meanwhile, Harley is smashing Deadshot in the face with her mallet, accusing him of killing Amanda Waller. Captain Boomerang and Hack have a bonding moment while they watch their team fight amongst themselves. Harcourt orders Killer Croc to stop the two from killing each other, but Croc can’t think of another way other than eating them. Harcourt stops the madness by pulling the trigger on the brain taser thing. Deadshot admits to what he’s done… he shot Waller. He killed her. He made a deal with Rustam, so that he could make good on the promises of the bargain he’s lived up to. Harcourt informs him that he is now doomed to the chair, and Boomerang starts mocking Deadshot. Floyd threatens to kill Digger and announces that he’s about to head out of there…

The power goes down and Hack bolts into the digital realm, realizing that Djinn is here. She tries to stop him, but he tells her that he’s trying to set them free. He released the encryption on all the files, so she can now read them. Hack finds the location of the Annihilation Brigade and who the spy on the team is. She yells for Harcourt to get out, because Djinn has deactivated the brain bomb system. Deadshot shoots Digger in the shoulder, smashes Harley in the face, and shoots countless guards on his way out the door. With his freedom, he now has a life worth living for now that he can see his daughter.

Analysis: Rob Williams continues the plot here, but on top of the pacing being off, it just seems rushed. I thought we were going to have an issue dedicated to solving the murder of Amanda Waller, but we blitz right past that into smashing Deadshot in the face. Even John Romita Jr.’s work seemed rushed. His anatomy was inconsistent at times, and the scene where Deadshot is escaping the prison was told poorly. It, again, blitzed right through this moment, making what could have been a great scene, cannon fodder.

This genuinely disappointed me, as I think Williams has shown great potential with this series, but can’t seem to use the full page count to save his life. Dividing a twenty page comic just isn’t going to do it, even if it is biweekly. It’s killing the pacing and the momentum of the story. John Romita Jr. is an amazing storyteller, but this limited page count isn’t doing him any favors. Shorten the story, and give these guys a full comic, and it will be better. Even if you are still rotating artists every story arc, it will still turn out better than this. Richard Friend’s inks were great again this issue. I really like his pairing with Romita. Dean White kills it again this issue. His stuff is always amazing. My problem, again is with Jeremiah Skipper. He colors a couple of pages, again, in the digital realm. This time, however, he does a Dean White impression, which defeats the purpose of having him color the pages instead. My problem last issue wasn’t that the pages didn’t look the same, I thought that was an interesting idea… my problem was that those pages looked like crap. Pat Brosseau letters this issue, and maintains the consistency he’s brought since he joined.

I still don’t understand why Deadshot would have shot Waller in the heart instead of the head… the only thing I can conclude is that he’s a triple agent, secretly working with Waller in faking her own death. Seriously, an assassin who is known for his accuracy and skill with a gun shoots someone in the chest instead of the head… Triple. Agent.

Secondary Synopsis: Hack is in shock as inmates of Belle Reve make their escape from a hole in the wall Deadshot left behind. Harley has an idea…. GIRLS NIGHT! They head to the local swamp bar there, in Louisiana, and Croc makes himself at home in the waters. Boomerang thanks Hack for checking on him and his shot arm, and he leaves. Harley gets drunk and begins talking to a blood hound, confusing it with Hack. June opens up about how things are going really well with her mutant crocodile-boyfriend. Hack asks about Harley and Flag, but Harley doesn’t seem so sure. He’s not like her usual taste in men. You know, the psycho/murdery type. Hack gives her a pep talk to go save him, and Harley calls her a hero. Hack takes this to heart, and decides she should be active. She heads to the base to read more on the files when she is confronted by Harcourt. Hack asks her if she has been the spy WHEN… Boomerang stabs her, telling her “No. I’m the spy.”

Secondary Analysis: This part was fun. Although most of it felt like filler, the interactions with the team are what bring you back for more issues. You enjoy the company. Williams pacing is better than the first half, but still feels off. The art team all seem to be in perfect harmony here. Eddy Barrows, Eber Ferreira, and Adriano Lucas all do a fantastic job here, and had fun with the pages they were working with. Pat Brosseau, still doing his thing on letters.

Captain Boomerang being the double agent is interesting. I like him as a character, and want to continue to see him on the team, but this is some serious stuff… it’ll be hard, coming back from this. And another thing… back when Jim Lee was drawing this book and we had those backups that had a single character story — Digger told a fantastical story to Waller about his origin and how he was a spy. But the story was so ridiculous that we wrote him off, thinking it was a fun story, but how that wasn’t true at all, and NOW we realize he has been the spy on the team the whole time. That in that ridiculous tale, he was giving us a hint of truth… I see what you did there Mr. Williams.

Also, him stabbing Hack in the process… that’s okay with me… I didn’t care for her, and felt like she has been in the spotlight too much recently.