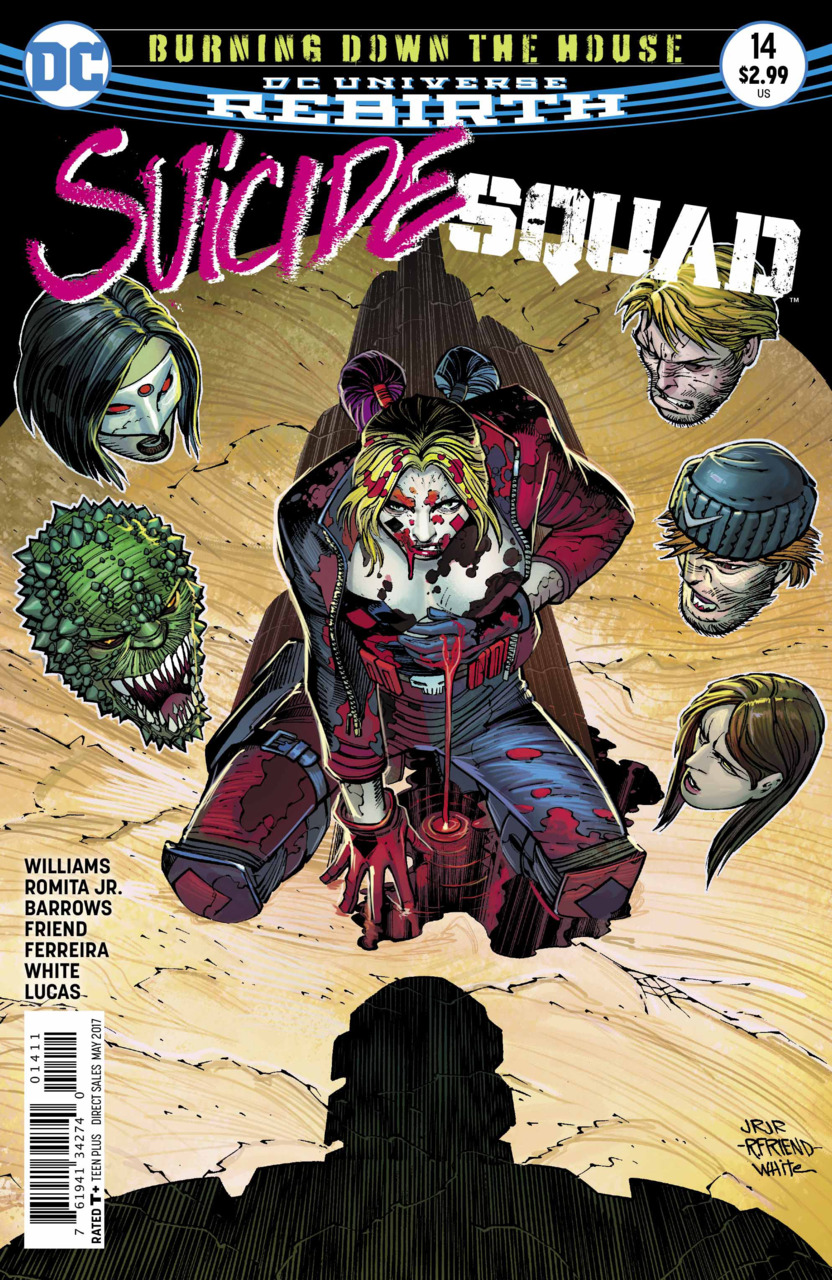 … To catch you up… Rustam, former leader of the Suicide Squad, had Deadshot betray the team and assassinate Amanda Waller. He is currently attempting to get Rick Flag and Katana to join him in in destroying the corrupt US Government. Meanwhile, Hack discovered that Harcourt (current squad overseer) was the spy, only for Captain Boomerang to announce that it was him instead, stabbing Hack in the process.

Synopsis (Spoilers): With the help of Deadshot, Rustam and his makeshift team are destroying Washington D.C. A politician crawls from the debris, and Rustam orders Deadshot to end him. Lawton’s gun doesn’t go off, and he blames it on a jam. Rustam begins to doubt Floyd, and lets Flag and Katana know that his offer to them still stands. Rick Flag responds that he is a soldier for the country that Rustam is attempting to tear down. Katana also threatens to kill Deadshot. The team groups together, and Rustam opens a portal, so they can tear down London next…

Harley catches up with Hack, only to find her lifeless body lying on the floor. Harcourt is standing on the opposite side of the room, and she tells Harley that she found Hack like this… someone must hav—before she can finish, Harley slams her up against the wall; choking her. She demands to see the security footage, but Harcourt points out that the system is shot. Harley walks off, radioing to the rest of the team that they aren’t heroes. They don’t save the day. Hack was the hero, and now she’s dead. But revenge… revenge, they can do. She finds a aircraft with coordinates logged in… someone is trying to help her. She gets in, and heads in that direction. It takes her to Northern Qurac.

Rustam and his crew arrive just behind Harley. He’s surprised that it’s only her, and the two face off. Rustam dodges her attack and the speedster on his team beats her up pretty good. Deadshot tells her to stay down, but Harley attacks him next. Lawton retaliates, and shoots her in the gut. Rick screams her name as we end episode four.

Back in the swamp bar, Captain Boomerang sits alone drinking his beer, crying as he comes to terms with the fact that he killed someone who was the closest thing he’s had to a friend. He gets into it with the Duck Dynasty looking bartender, thinking he deserves a free beer after drinking a dozen. The bartender lets him know that he doesn’t like his British tone, and Boomerang looses it; wondering how obvious he has to make it that he’s from Australia. He’s about to beat the guy, when he starts receiving Harley’s radio transmission via the bomb in his brain… he’s drunk enough to think that it’s God talking to him at first. He sits there, looking into the sky, listening Harley say that they aren’t heroes. They don’t save the day. But revenge, they can do… Then the bartender smashes the butt of his shotgun into the back of Boomerang’s head, and everything goes black…

Boomerang thinks back to right after he killed Hack. The shock he went into. Harcourt told him he did a good job. Boomerang may have been the spy on the team, but Harcourt was behind it all. She hired him to have a guy on the inside.

When Digger comes to he takes Harley’s message to heart. He heads over to find Croc in the swamp, and tries to convince him to help by yelling, cursing, and lodging razor sharp boomerangs in Croc’s thick hide. He finally gets to Croc when he threatens to kill him, skin him, and make out with June on his hide… Croc responds by punching Digger in the face. Enchantress shows up, and asks what it is that Digger wants. He wants revenge.

Back in Kahndaq, Harley is holding on, trying to keep pressure on her wound, when the three of them emerge from an aircraft to attack Rustam and his crew. However, Amanda Waller has also shown up to wreak some havoc, as she brought a giant futuristic weapon from Men in Black with her.

Analysis: Rob Williams’ run on this book has been up and down for me. A big reason for that is the splitting up of the issues with two different artists. While that problem doesn’t go away here, I do appreciate that we are digging into the psyche of the team members, and seeing what really makes them tick. We get that, primarily with Harley and then with Captain Boomerang. While we do get doses of the other team members, we don’t get inside their heads like we do with the other two. I’m not sure if I’m into this interpretation of Harley Quinn yet, although I do enjoy her characterization much more than how she is in her solo series. Captain Boomerang, however, has become one of my favorite characters. His personality, his character quirks, his stupid boomerang gimmick… and then we see the selfish backstabbing jerk he can be, and then we feel bad for him because of the decisions he made… Now that’s just good writing.

Last issue, my complaint was the pacing was off. It felt rushed and it jumped ahead in a moment I felt like Deadshot could have easily stood out. Here, I felt like the plot moved at a nice, steady pace. All the character moments felt earned, and fully flushed out.

John Romita Jr. does okay this issue. It wasn’t his strongest outing, but it got the job done. Even his storytelling wasn’t up to par of his usual self. The first few pages in particular felt rushed, and I wonder if the schedule is getting to him. Richard Friend’s work looked really bad this issue… especially during the first several pages. It looks as though he inked them a few minutes before it was printed. It’s rushed, sloppy, and unfinished. Hopefully he steps it up next issue. Dean White does good for the most part, but again, there was a mistake in coloring within the first few pages on Deadshot’s shoulder. Again, I think these pages were rushed, and not everyone had the time to do it the way they normally would. As usual, White’s colors are beautifully painted on. The blending of colors that shouldn’t work together, but somehow do, is amazing to look at.

Eddy Barrows blows me away here. This is the best his art has looked since joining the book, and it makes me want to see a full arc with him onboard. It seems as though he’s finished with that experimental painted look with no inks finally. It was cool when he did it in Detective, but here, it just didn’t feel earned. Yet he still gets to play around with reflections in beer glasses, and that was just cool. And the way he draws Killer Croc may be my favorite thing ever. He’s so creepy, and hulking it’s intimidating to look at. The hunched-over silhouette of a beast lingering over you, staring at you with his yellow eyes…. creepy stuff. Eber Ferreira inks, and does a spectacular job. The inks used for that flashback scene were crazy. Nearly the whole page was black. It worked more like a negative, leaving little to color. It really made the page pop. Adriano Lucas is doing a great job coloring. His use of light is what really gets me. He has a great sense of when to use warm and cold lights, as well as how to make them both work on the same page. The final page is a great example of this.

Pat Brosseau continues to letter this, and although I had no qualms with the other guys who have lettered this book, Brosseau has taken it to another level. The shouting match between Croc and Boomerang stands out in my mind, as well as when June turned over to Enchantress.

Pick Up or Pass: Between the character interaction among the team members as well as the picking up of plot threads and amazing art, this issue is worth spending your money on.

In Conclusion: Suicide Squad picks the pace up and delivers a needed strong issue… I just hope it maintains that momentum.