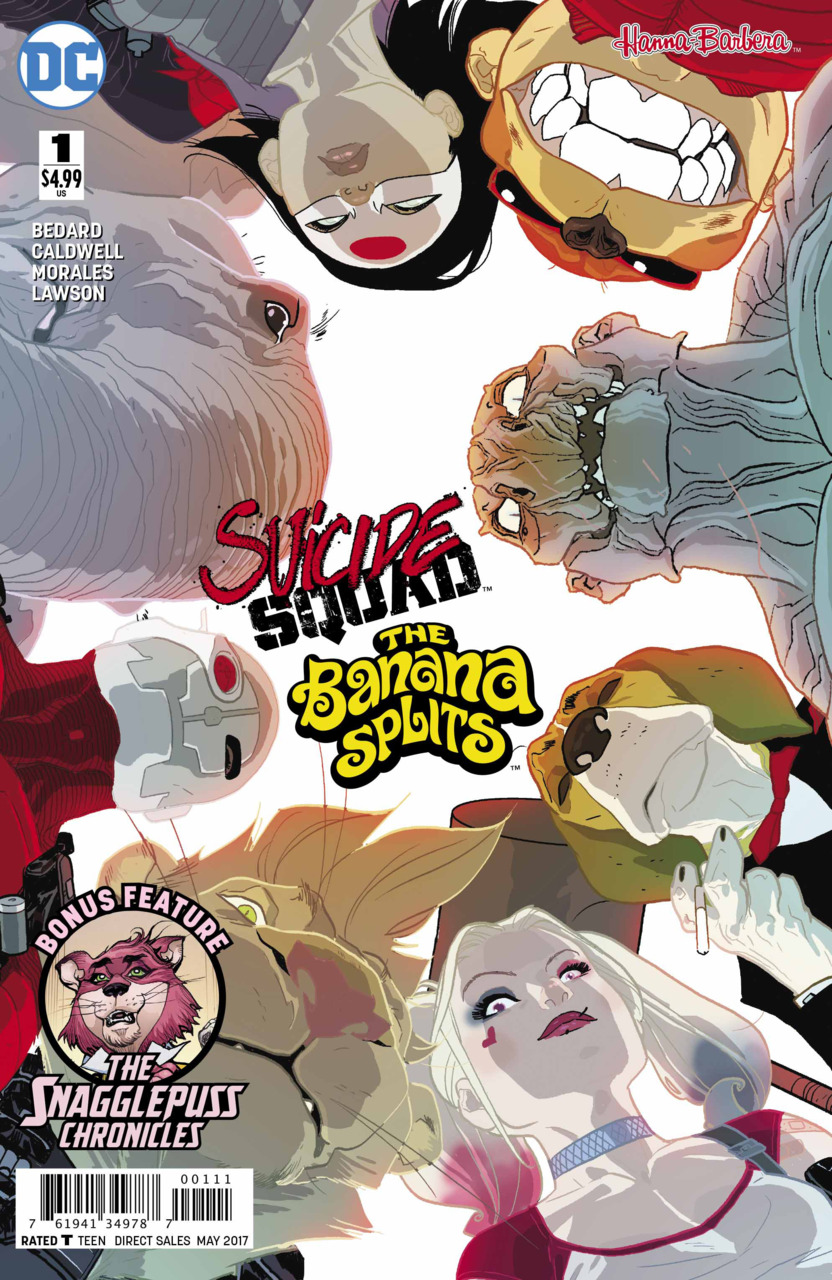 The Story: The Bubblegum Pop band, The Banana Splits, (Fleegle the beagle dog, Bingo the gorilla, Drooper the lion, and Snorky the elephant) are late for a gig at the Whiskey A Go-Go when they are pulled over by the LAPD. Due to a misunderstanding they have to take cover from a hail of police gunfire. The Splits are taken into custody and sent to Belle Reve Penitentiary. They get into a tussle with some fellow inmates during lunch and the mild mannered Banana Splits show their attackers why they should be more careful attacking a lion, gorilla, and elephant.

The Suicide Squad is in trouble. They are on a mission, wounded and spread out on a mountain side. Amanda Waller is trying to get the team to regroup and the mission back on track but to no avail, the Squad needs reinforcements. Flag has been taken prisoner. Waller can’t use any of the traditional Squad members to help the team out because her superiors will hold the failure against her Task Force X project. She needs unknown agents to save the Squad.

Waller looks at the Belle Reve video monitor and sees the lunchroom brawl. The Splits are beating up all comers. She summons the band and asks them if they want to serve their country and win their freedom. They agree and then are geared up for the mission to rescue Flag, Katana, Deadshot, Killer Croc, and Harley Quinn.

The four Banana Splits parachute onto a mountainside and immediately get separated.

Fleegle is saved from falling down a cliff by Deadshot and Bingo runs into a very hungry Killer Croc.

Drooper’s parachute is caught in a tree and group of identical and creepy girls with glowing eyes find him. They use some sort of magic to punch the lion out of the tree into the snow. As the weird girls somersault towards the downed feline, Katana jumps in front of Drooper to protect him from the girls. Katana decapitates and otherwise dismembers them with her sword.

Harley Quinn digs Snorky out of a snowbank. The two are approached by another group of those identical girls. Harley takes the elephant’s weapon and shoots at them.

The four Splits and Squad members find each other. We discover that the girls are actually an army of robots that the Suicide Squad was sent to destroy. The robots became self-aware and killed their human handlers. They then created an army of themselves and have taken Colonel Flag prisoner.

Snorky comes up with a plan that only Harley, with her ability to understand animals, explains. The team follows them to the compound where Flag is being held. Fleegle the Beagle sniffs out where they took Flag, Deadshot takes care of anyone that gets in their way. Drooper, Fleegle, Katana and Deadshot fight their way to the location the girlbots are interrogating Flag and free him.

Also in the compound, Bingo, Snorky, Harley and Croc attack the robot assembly line. They are able to destroy the machine that produces the mechanical girls. The two teams meet up and get out of the compound before the exploding machinery destroys the compound.

Flag thanks the Splits for coming to the rescue and says that he wishes he could help them more than just giving them their freedom. The Splits say that since they have been to prison they can change their band’s sound from Bubblegum Pop to something more edgy. Six months later the band plays a show newly christened as The Banana Splitz with their new hit Straight Outta Belle Reve.

Backup Story: The issue has a backup story with Snagglepuss being interrogated by the House Committee on UnAmerican Activities. They accuse Snagglepuss of supporting the Communists by undermining the morality of the country by writing a play that is inappropriate for children. He leaves the hearing and tells an admirer the story of a time that he was in a play when the theater caught fire. Snagglepuss tried to warn everyone, but the audience thought it was part of the show. There were many casualties. Snagglepuss points out that even when you tell the truth you can’t predict how people will react. But it doesn’t mean that you should stop doing what you think is right even if you lose. Battles need to be fought even if you aren’t confident of victory.

The Breakdown: Writer Tony Bedard does a good job of combining the two totally different teams into one story. The plot is predictable but unfolds in a clear and understandable manner. One drawback is that the Splits don’t have much individual personality outside of their speech tics. Fleegel has a lisp, Snorky does’t speak except by elephant nose-horn honking. Overall it is the silly crossover that you would expect with these two crazy teams.

Artists Ben Caldwell, Mark Morales and Jeremy Lawson do a fine job laying out the action in this tale. The plot is clear and well displayed. There isn’t any confusion about what is happening. However, Bingo the gorilla is strangely drawn. Those who have seen the show of The Banana Splits will understand the toothy way he is drawn, but others may have trouble deciphering what he is supposed to be. There are a few panels that show him successfully, but mostly he is poorly rendered.

My take: I expected a Suicide Squad-Banana Splits crossover to be silly and it was. I’d recommend this book to those that have nostalgia for the old show or just want a brainless fun ride. I wouldn’t say that there is anything compelling here though and its $4.99 cover price may rightly dissuade some readers from getting the book.