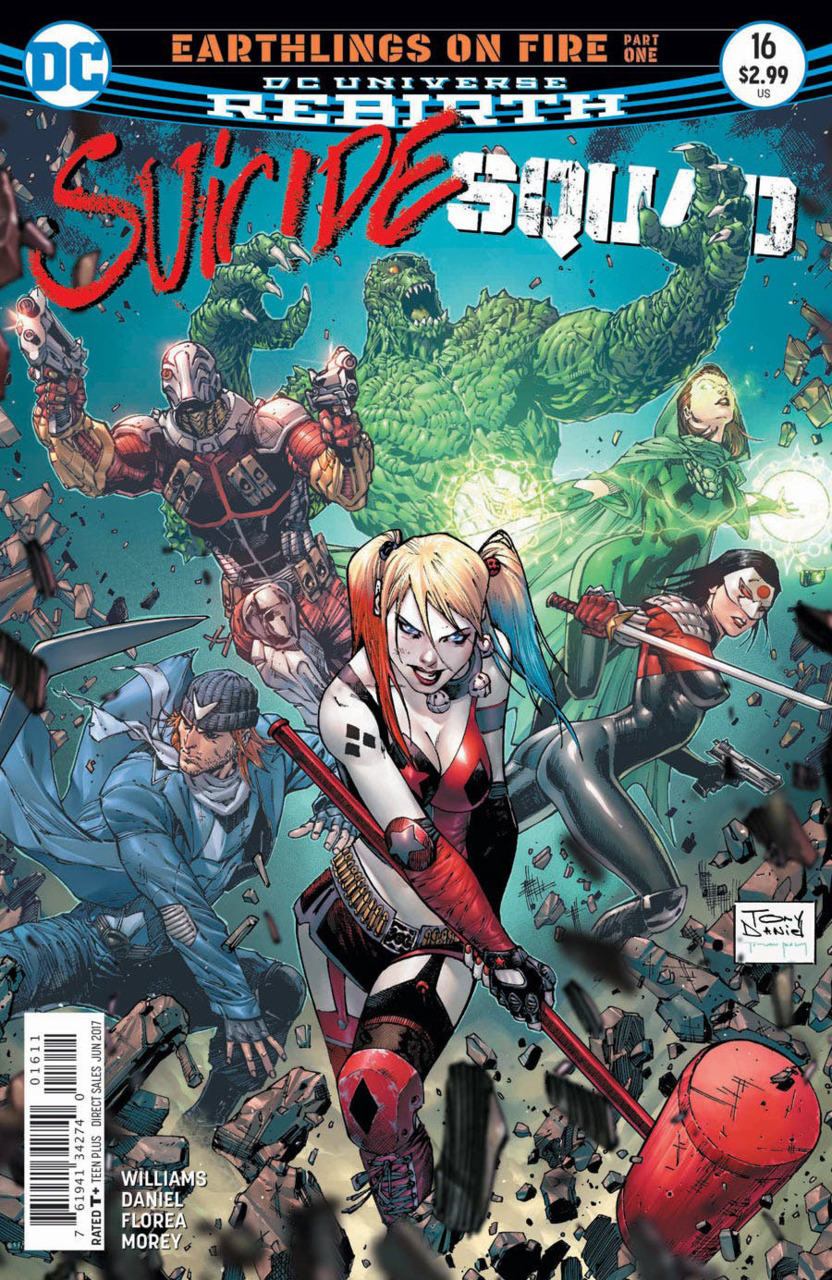 To catch you up: A while back, Amanda Waller sent her team on a mission, and they came back with an orb (turned out to be a gateway to the Phantom Zone) and found that General Zod was inside. Waller sees him only as a weapon, but needs to get her hands on a rare item to use against him before she can put him in the field. So she sends the Squad to Lexcorp to steal some Kryptonite.

Synopsis (Spoilers): Amanda Waller shows up inside Lex Luthor’s skyline apartment, and he begins to flirt with her. He tries to cover her a gift, but she refuses to take it. He informs her of his knowledge of some top secret information, but doesn’t tell her how he got it.

Meanwhile, stories below ground, Task Force X have teleported into Lex’s secret bunker thanks to Enchantress… however, Captain Boomerang left one of his arms in the portal, and wants it back. However, they are interrupted by (who Deadshot refers to as) “Lexcops”, and Flag reminds the team to take them down using non-lethal means. The Lexcops try to radio to Luthor about the intruders, but Enchantress has broken up the com signal via magic.

Luthor reveals that he knows the Squad found something in Siberia – alluding to the Black Vault, and Waller suspects Luthor to be a member of “The People”.

Enchantress reappears with “Digger’s arm”… except it’s from a giant hairy demon. Definitely not Digger’s. Harley is getting the feeling that Boomerang is off, and asks him about it. He admits to doing “a bad thing”, but they are interrupted by a Lexbot that’s job is to kill any living being in the vault… So Enchantress turns everyone into zombies, easily fixing that problem. The bot goes back into his corner, and waits for his next assignment.

Waller spills wine on Lex’s carpet and then tells him that she knows of Russia’s Annihilation Brigade, but she has a weapon that can stop them.

The Squad enters a room, but Digger is still complaining about his arm, so Flag orders Enchantress to get it back just to shut him up, and she teleports away… just in time for the crew to find Luthor’s Bizarro lab. The team is clearly outmatched, but they are also reckless and that plays to their advantage.

Luthor and Waller are beginning to open up to each other, and even share a romantic moment just as his vault alarm goes off. He changes into his Superman suit, acknowledges Waller playing him, and flies their way as Amanda warns the team.

Lex easily deals with the team, mocks her Suicide Squad, and gets bit in the head by Harley Quinn… Enchantress shows back up, again, this time with Waller. They inform Lex of a virus Enchantress put into his computer. It will erase his entire life’s work unless he gives her what they came for – Kryptonite. However, Lex already tried to give that to her. It was in the box. He offers to give it to her again, with no strings attached… sure.

Back at Belle Reve, scientists begin a surgery involving the insertion of the Kryptonite bomb into General Zod’s brain.

Analysis: Rob Williams gives us an entertaining ride this issue. While it didn’t blow me away, I did have fun with the Squad this week. The dysfunction between team members is entertaining to watch, and at times it felt like I was watching a play-through of a D&D game. However, I felt like Enchantress was exploited the whole issue as nothing more than a plot device. She has the least amount of character to her, and whenever they needed to progress the plot, it came down to using her “magic” to solve it. That comes across as just lazy, and requires zero thought process on my part to solve the puzzle. The manipulation/understanding/shipping between Waller and Luthor was interesting and felt natural. I really liked the chemistry between the two, and would like to see that explored in the future. This whole issue just feels a bit pointless, though. Amanda could have literally walked up to Lex and asked for Kryptonite, and he would have given it to her. The fact that she wrecked his vault, and he still just gives it to her feels off. I get we need to make a comic, and there needs to be action, and therefore stakes, but this was a bit much.

Tony S. Daniel does a great job here for the most part. There were times where his art lacked consistency. Also his facial expressions were on point for most of the issue, but there was a few points where that quality dropped. The attitude he puts into these characters really made things lively. Sometimes his lines look too straight… like unnaturally straight. Harley Quinn’s legs look two-dimensional while the rest of her is fine. This happens at multiple points. Like he is using a ruler. No big deal if he is, it’s just something I noticed. I also liked all the different styles of Bizarro. There’s one with three heads, one with tentacle legs, and one with Doomsday’s hand from BvS. Possibly my favorite thing Daniel brings to this issue is a slight revamp of the characters’ look. The team looks amazing – slight militaristic look without loosing their individual personality.

Sandu Florea inks here, and does a great job. I guess now that I think about it, the stiffness at times and inconsistency could come back to this guy instead with him being the finished product, but there’s no way to tell unless I saw the pencils beforehand. Tomeu Morey’s colors are amazing in action sequences, but feel too toned down in the quieter moments. Also, he gave everyone on the team grey skin with red splotches when they became undead, and then immediately ditched that look the next page. Now either Enchantress fixed them while we weren’t looking, or Morey forgot he gave them that look. I liked it, and felt like it should have continued for the remainder of this comic. Pat Brosseau does a great job lettering this book. I found out he hand lettered the title page, but it didn’t look all that great to me. It looked like he used the paint feature on his computer, and had the pixel count down pretty low.

Pick Up or Pass: This is the start of a new story arc, and with the breaking up of the comic artists problem now gone, I’d jump in. This book has a lot of potential.

In Conclusion: While this book still hasn’t quite hit it’s stride, it still has potential, and the characters are still the driving force.