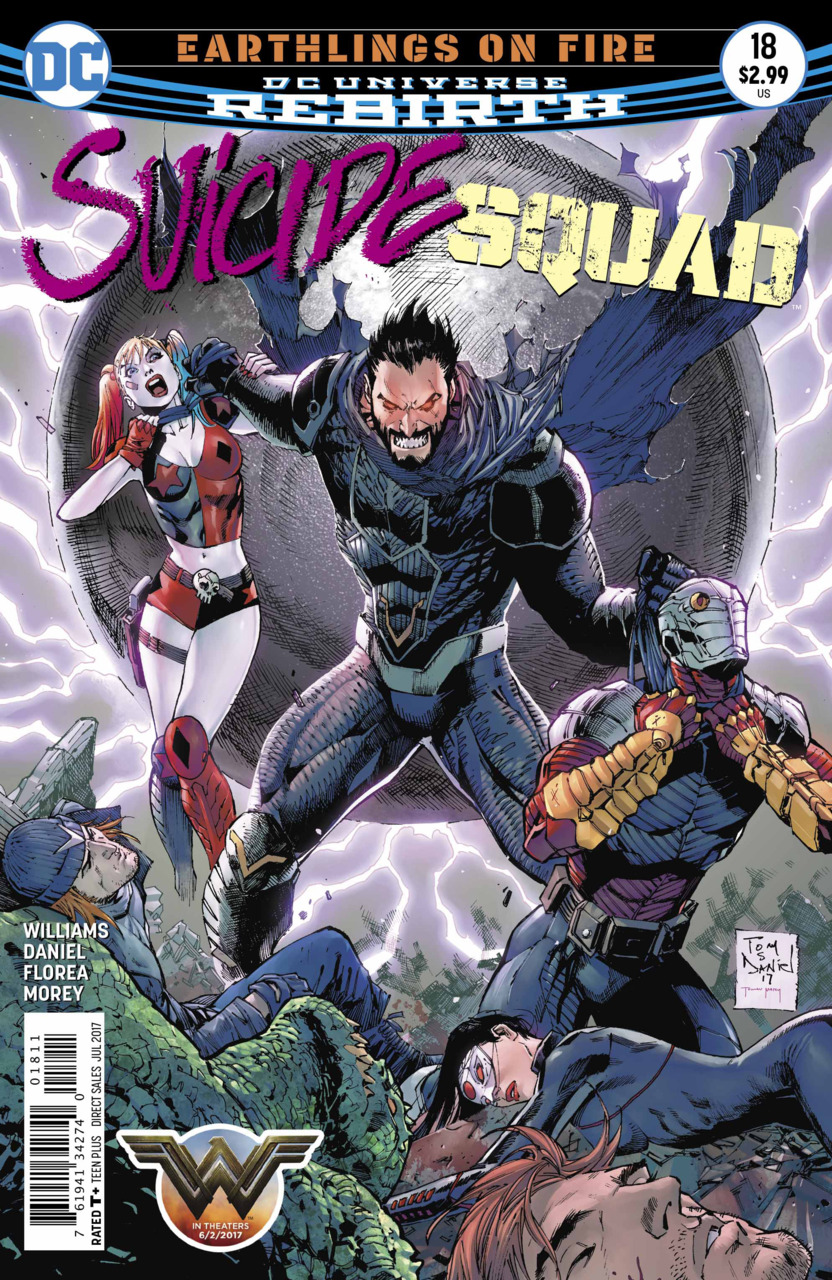 To catch you up: Amanda Waller, wanting the ultimate weapon on her team captured the Black Sphere – which is a gateway to the Phantom Zone – and let General Zod out. Placing a Kryptonite bomb in his brain, she planned to use him as a force for good. However, after getting back from their first mission, Zod has plans of his own…

Synopsis (Spoilers): Things are heating up between Harley and Flag, as they get down and dirty in their cell. Harley hears a loud yell, and assumes it’s Flag…. doing his thing. But he claims it wasn’t him. They contemplate running off together and eloping, but before they can make a decision an alarm goes off, calling for the team to assemble. Croc and June are enjoying a book when they hear it, and Deadshot has a revived need to live, after getting to spend time with his daughter.

Amanda Waller, however, is getting her base torn apart by an insane General Zod, who has blown a good size chunk out of his own head thanks to his heat vision. He drops the Kryptonite bomb next to Waller, who is laying on the ground. He tears apart the computer system that controls the bombs, so that she can’t activate them.

Suddenly, Zod is struck in his open head wound by a boomerang (and gets electrocuted for some reason), as the Squad have assembled together at this time. Deadshot tells him that they are ready for him this time. Since they fought last, they’ve taken down the Justice League. Harley interrupts him, telling him that they got their butts kicked, but Deadshot tells her to shut up.

Zod thanks them for giving him access to the Black Sphere, and says that nothing can stop him now… And then Enchantress shouts, “Except for MAGIC!.. your weakness is MAGIC!”, so Zod blasts her before she does anything.

To overwhelm the group, Zod releases the souls of deceased Kryptonians from the Black Sphere, and it works! Until he is struck from behind, knocking him to the ground. And the only thing he hears is, “Peanut emogi.” Zod, being confused and frustrated, unleashes a barrage of heat blasts in every direction, one of which strikes Rick Flag in his side. Before the Squad can react, the wall behind them is torn down, with Cyborg Superman and Eradicator asking General Zod to join them.

Analysis: Rob Williams starts off the issue alternating between sex scenes with horror and gore, that balanced each other in a way that worked. However, after that, we get lots of action with little emotional connection with what was happening. I also wonder the actual implications of a Kryptonian blasting of a piece of their own brain… would it rapidly heal? Wouldn’t he loose some core motor skills? Would he loose any superpowers or even memories? I don’t really understand that, and I get that this is a comic book and I’m talking about an alien, but we’ve got to keep some things grounded in reality or the whole thing falls apart.

Tony S. Daniel does a great job with the whole balancing act. He’s very skilled at drawing out the emotion on the page. I felt like the panel with the Black Sphere behind him was the weakest panel in the book. His faces aren’t as consistent as they should be, but overall, he does a good job with it.

Sandu Florea does a great job inking here. He always leaves plenty for the colorist to work with, and with Daniel’s style, that’s a good thing. Tomeu Morey does very well for the most part here. The depth he puts into his colors is amazing. It always looks great, and impresses me how much work he must do to make it look that good. Again, his weakest page was the Black Sphere panel. It’s as if he scrapped the depth I was mentioning earlier on this page. The purple needs some shades and variations to make it pop, but it just doesn’t look as good as the rest of the book. Pat Brosseau continues his lettering of this book, and continues to be a solid choice.

Pick Up or Pass: This issue was an interesting and engaging read all around, but the book needs a jolt of energy to ramp things up. We need some character motivations from everyone involved, especially Amanda Waller, as I feel she just wanted General Zod on the team because it sounded cool as opposed to an actual reason of why she needed him. Until this book gives me a reason to be excited about it, it continues to be a pass for me.

In Conclusion: Suicide Squad continues to have potential (and I feel like I’m saying that every time), but needs a jolt of energy to get things moving.