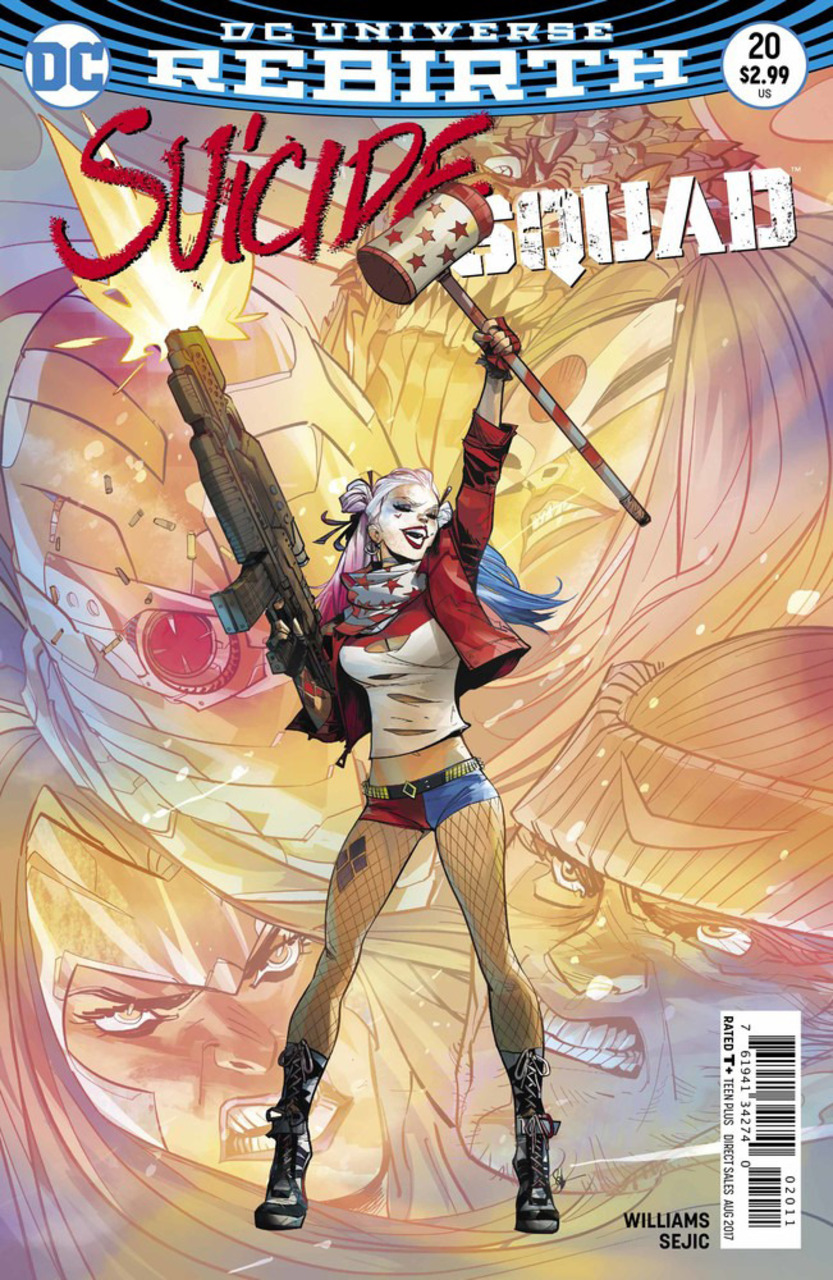 The Short Story: Amanda Waller has a job opening and fills it.

Synopsis (spoilers ahead): We open with Waller interviewing Katana, who is willing and ready to take on the responsibility of being leader. Waller doesn’t want her as leader, though. She believes she’ll be more suited as Waller’s bodyguard.

Harley Quinn is broken after the loss of Flag. The two were being shipped together before his death. Quinn was beginning to show progress, but now that Flag is gone, she’s regressed worse than she was before — resembling the Joker more now than before.

Enchantress and Croc are out of the mix. The budding romance between the two is something Waller plans to exploit, so the responsibility of the whole team being on their shoulders would be pointless. The two visit Manhattan, and June is nervous about presenting her art to get a freelance gig because of her being a convict. Croc convinces her to try, and she does. However, she doesn’t make it past the front desk. Enchantress emerges, and threatens the city, but Croc scares a big shot to approve of it, and everyone is happy.

Meanwhile, Waller is interviewing Captain Boomerang, but she lets him know that she doesn’t like him for the job. He’s too immature, his colleagues don’t respect him, and she doesn’t trust him.

She moves on to the final member, Deadshot. He’s got a new cybernetic arm equipped with a wrist mounted gun. He tells her he’s not leader material, but insists that she knows who the leader should really be.

Analysis: Rob Williams had me with this issue. Yes, it was a “filler issue”, but let’s be honest — they’ve been much better than the ones trying to follow a plot line. In fact, I’d prefer just the filler issues. We have to fill in the blanks of the adventure, and we just see their interactions in between missions. Wondering who was going to take charge was a no-brainer for me. It was down to 1) Katana or 2) Deadshot. Katana was second in command, not a criminal, and an extremely loyal person. Plus, we have yet to dive into her as a character, and this would give us the opportunity to explore that. However, I have the belief that if someone wants a position of authority, that’s a red flag that the power has potential to go to their head. With Deadshot, you have someone who has had a lot change for him. He’s found a reason to continue living — his daughter. He’s finally got some time with her, and he has a new outlook on life. The guy lost an arm. And he’s the type of person who’s willing to make the tough decision. And then we get to his choice, and the whole thing falls apart for me… Harley Quinn. From a logical standpoint, Harley is about middle of the pack in terms of field leader. And from a story perspective, Harley is the LAST person I would choose, and that’s why this has me ticked off. Boomerang would be fun. Croc would be interesting mostly because of his relationship with June. And Enchantress has only been used as a plot device so far, so at least we’d get some story opportunities. Williams making Quinn the leader makes this whole thing feel like a popularity contest, therefore throwing out all logic, yet the story is still predictable.

Stjepan Sejic does it all here — pencils, inks, colors — and boy, is it beautiful. I’ve seen his work on some indie work, but didn’t realize how much I would enjoy him on superhero books. Each character has so much personality, yet looks so cool. The detail in Katana and Enchantress’ clothes were amazing. Boomerang looked fun. Deadshot looked like a boss. This book is beautiful, and I’d like to see DC use this guy more. Pat Brosseau continues to letter this book, and does a solid job here. No complaints.

Overall: The direction of this book had me hyped when it began. It would fill me with hope and excitement, and by the end would make a stupid turn that defies all logic. This one issue encapsulates that.