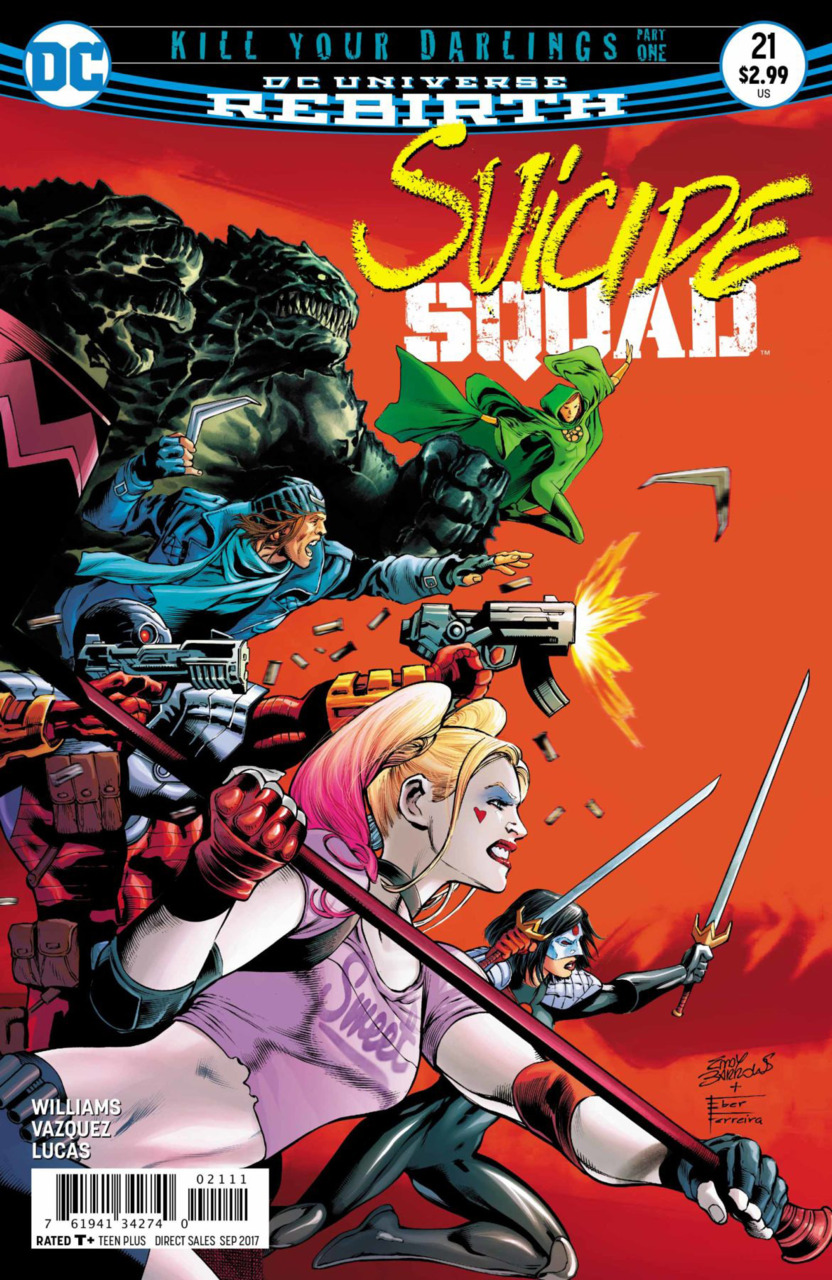 The Story (spoilers ahead): Harley Quinn is now the field leader for the Squad, and she’s taking the team on a mission to attack The People. Putting a lunatic like Harley in charge goes about as well as one would expect it to and the rest of the team notes this. Elsewhere, Amanda Waller is testifying before Congress and begins to question the affects her life choices have had on her personal life. She’s reduced to using spies to find out the gender of her future grandchild.

The Bottom Line: The team’s hunt for Director Karla was a trap. Harley’s ineptitude as team leader leads the Squad to literal ticking time bomb. The whole operation falls apart. Boomerang runs cowardly runs away, and Killer Croc refuses to let Harley wake up Enchantress to solve the problem. She’s constantly reminded that Rick Flag would’ve handled things differently. Harley orders Deadshot to shoot Killer Croc in the head for disobeying orders. Deadshot obliges. Harley notes that the team is all about to die anyway as the final seconds of the bomb tick. Amanda Waller is rerouted on her trip back to Belle Reve. Director Karla has kidnapped Amanda Waller, and wants to use her to “save the world”.

The Writing: Rob Williams tells a fun Squad story here, but the real gem of the issue is his stuff with Amanda Waller. There is no real suspense in her congressional hearing as we know she is going to lie regardless, but I enjoyed the character study on her. Learning that Amanda Waller has spies tailing her own family because they won’t speak to her is powerful, tragic and delightfully in her character all at the same time. The Suicide Squad moments are just fun comics. Enchantress transformed a crashing plane into a fire breathing dragon. It’s odd enough to be awesome. A moment like that would not work well in a Justice League comic, but for Suicide Squad it fits. I doubt any of the Squad is in any real trouble during the cliffhanger, but Williams left them in such a precarious situation that I really need to read the next issue to see how they get out of it. I think a few moments to look into Harley’s mind would’ve improved the issue. It’s possible that switching internal narration focus between Quinn and Waller would’ve been too much for the issue, but that never stopped Jeph Loeb when he wrote “Batman/Superman”. I hope future issues give us more insight onto the pressure and choices Harley is facing as team leader.

The Art: Gus Vazquez is a real asset to the book. His ability to go from the chaotic battle of Bulgaria, to the emotional congressional musings of Amanda Waller show his versatility as an artist. His Amanda Waller is perfect. She’s drawn as the tough character we know her as, but with just the right subtleties of the weight it carries. The pain she feels from the sacrifices she’s had to make is clear in the art. It’s not an easy balance to achieve, but Gus has done it. A good artist enhances the script. Pay attention to the scene of Waller at the Lincoln Memorial. The framing of the panels and layouts are very cinematic. I hope Gus sticks around. Adriano Lucas’s contributions should not be forgotten. When you’re dealing with characters like Harley Quinn, Enchantress and Killer Croc, you realize that Suicide Squad should be a cartoon. Lucas’s inking and choice of bright colors give it that cartoony feel.

The Verdict: This isn’t the Fantastic Four or Teen Titans. Suicide Squad should always be a “different” type of team book, and Williams is continuing that tradition. Nobody expected Harley Quinn to be the new field leader but isn’t Suicide Squad supposed to be about the unexpected?