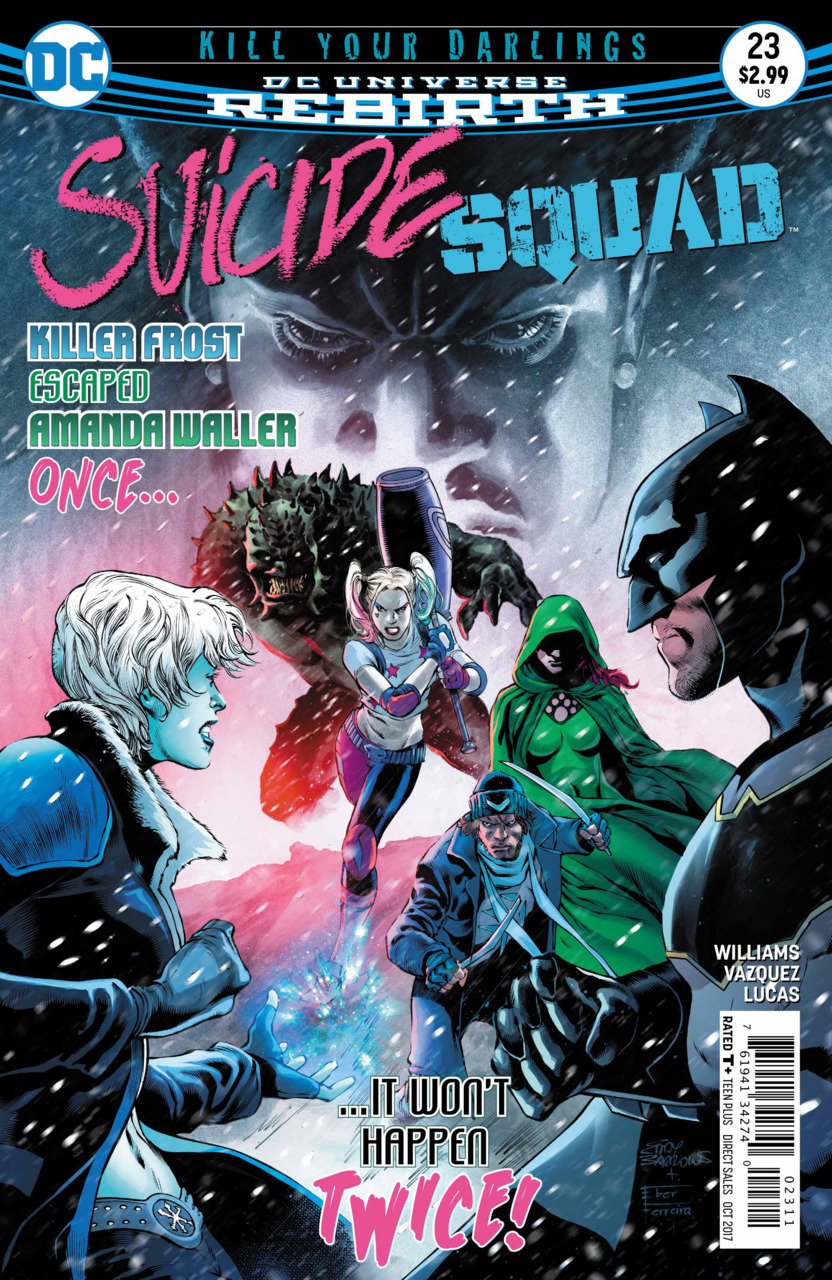 Synopsis (spoilers ahead): We open with a flashback from the end of Justice League vs. Suicide Squad. Batman is talking to Amanda Waller, admitting that Caitlin Snow shows that there is value in Waller’s Task Force X. Waller tells him that he can have Killer Frost, but he’ll see that she belongs in the Squad.

Currently, in Gotham City, the Squad is getting the jump on Frost. They take her on, but she’s able to hold her own. Waller threatens the team of prisoners, and this is getting at Katana, who isn’t a prisoner. The team stops fighting, and throws their newest member at Frost, it just so happens to be El Diablo (who isn’t feeling well). Frost is a heat vampire, meaning that she sucks the heat out of people.

So El Diablo dies (not really, but that would be funny), and Frost has more power than ever. That is, until she starts to not feel well. Harley breaks it to her that Waller injected El Diablo with a pathogen, which Frost has now ingested. She rapidly grows weak, but Batman jumps in to help her out. Batman stalls fighting them just long enough to hack into their brain implants and incapacitates them. He warns Waller that he is coming for her, but is sliced from behind by Katana. He falls into a hole in the ice, with the ocean below and tries to take Frost with him. However, Katana grabs Frost and loads her into their aircraft, along with the rest of the team.

Batman crawls out of the hole and he’s angry.

Analysis: I have no idea where Rob Williams is taking this story… and I don’t mean that in a good way. This whole issue seemed to drag on. Very little actually happened, and by the issue’s end, it felt pointless. The Katana betrayal of Batman seems ridiculous after recently finding out she is a member of Batman’s Outsiders. But I guess that gives credit to Waller’s manipulative abilities. It still feels wrong. I just don’t see where this is going. What is the goal of the mission? This was just a poor effort on Williams’ part.

Gus Vazquez’s art is okay. I just feel like a book like this should have top notch art. His characters are a bit inconsistent. This whole story takes place in one scene, making things very uninteresting. His storytelling seemed to be on point, though, and the whole scene thing is more Williams fault than Vazquez. Adriano Lucas’s colors were really well done. His shading and use of color was on point. The color contrast between hot and cold were nice to see on the page. The washed out flashbacks were a nice touch, instantly taking you back in time. Pat Brosseau’s letters were awesome here. He stays consistent and leads your eye well. He also gets to flex his muscles here with the sound effects. They were all unique and looked amazing.

Final Thoughts: Confusion. Emptiness. Wondering where this is leading. Without a consistent art team, Rob Williams really needs to step it up.