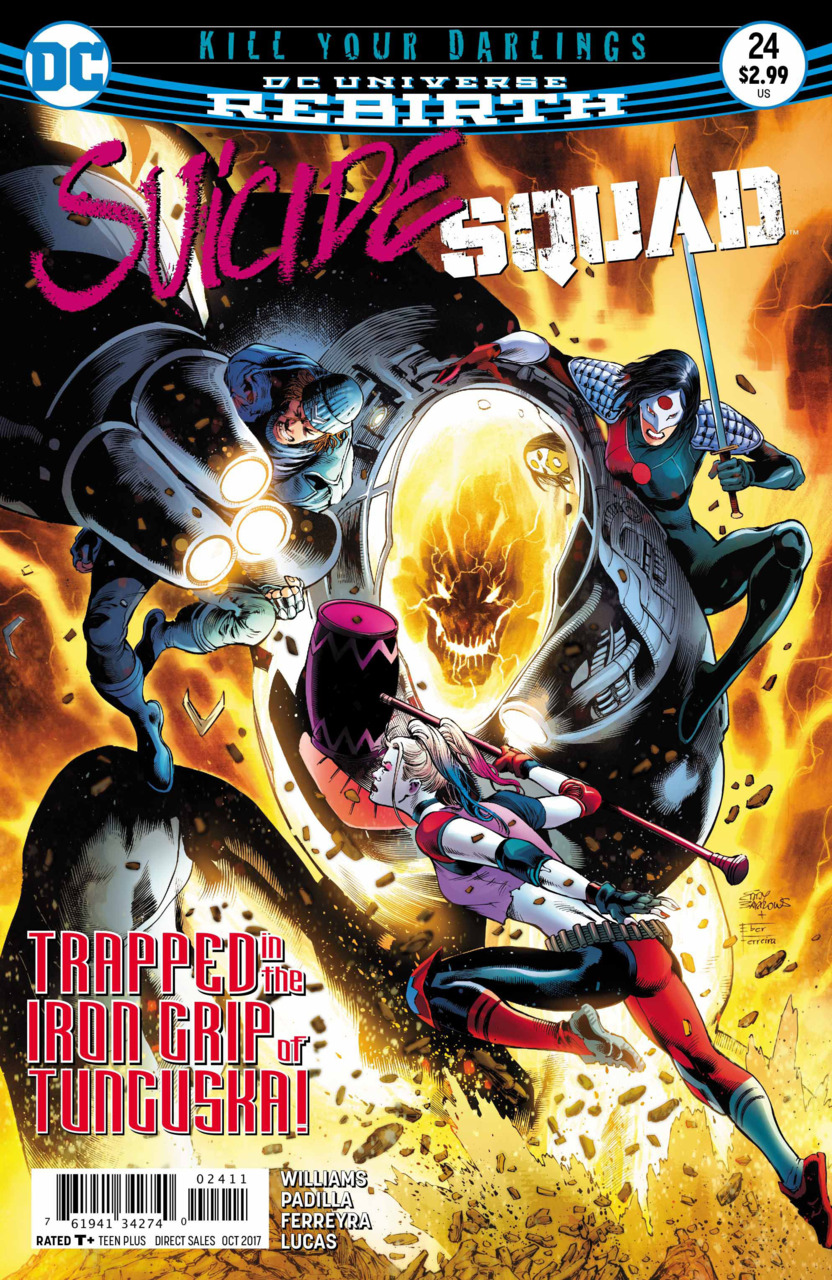 Overview: Batman mounts a rescue of Killer Frost at Belle Reve Prison while Amanda Waller and the Annihilation Brigade put their plan into motion.

Synopsis (spoilers ahead):  The story opens dealing with the fall out of the previous issue, with Katana regretting attacking Batman and Waller revealing her plans to the Squad to put every Metahuman on the planet behind bars.  Harley Quinn takes issue with this plan and confronts Waller, who criticizes Harley leaving Boomerang to die in issue #22 and tells Harley to obey her orders or die and that her team is not the only Suicide Squad.

Waller has a conference call with Direktor Karla, who convinces Waller to send him her “Joseph Protocals”, her files on the superheroes’ secret identities and weaknesses.  Karla orders Tunguska to ready the Annihilation Brigade and the Suicide Squads around the planet.

Meanwhile in the swamp outside of Belle Reve Batman is attacked by Killer Croc as he prepares to break into the prison to rescue Killer Frost.  Inside the prison, Waller speaks with her science team about newly developed battle suits for her soldiers, dubbed “Suicide Suits” while Harley Quinn and Katana break into the computer room and discover that Waller has been in contact with Karla and that Waller has been compromised.  A wounded Batman is then shown to have made it inside the prison and is confronted by Enchantress, who is knocked out from behind by Harley, who along with Katana have freed Killer Frost.  Katana and Harley cover for Batman who escapes in a stolen Belle Reve jet.  Waller orders the jet destroyed, to the shock of Deadshot and Diablo.  Waller is revealed to be under the control of Gulag and orders the war on the Superheroes to begin as anti-aircraft missiles close in on Batman and Killer Frost.

Analysis: This issue is largely set up for the finale of this story arc next issue.  It does a good job of establishing all the major players and moving the story forward.  There isn’t enough time with all the set up for any big action set pieces, but there’s a good degree of increasing tension throughout the story.  I always enjoy angry Batman taking on a building full of supervillains by himself, but given that its not his book I enjoyed that he had to be rescued by Harley and Katana.  I do wonder what was the point of capturing Killer Frost as it only seems to have been a plot point to give them a reason to have Batman show up in the title to rescue her, but perhaps she’ll have more to do in the finale.

Harley’s head to head with Waller in the story was well done.  I enjoyed the playing off of Harley asserting herself as the leader of the team, while at the same time watching the slow burn of Waller starting to unravel as her plans are coming to light.  It’s an interesting flip from the usually tightly controlled Waller and the unpredictable Harley.

The big reveal that Amanda Waller has not only been coerced by Karla, but appears to be possessed by Gulag seems like a bit of a cop-out.  The problem with doing a story about Waller loosing control is that at the end of it, it will probably result in Waller going to jail or otherwise being taken off the table for a period of time. I can’t help but wonder if her not being responsible for her actions is some sort of work around to give her reasons to still be on the book when the dust settles after this story wraps up.  I think I would find it more interesting if Waller was putting this plan into motion without being influenced by outside forces.  Frankly this “war on the superheroes” plan seems like something that Waller would want to do regardless.

The art in this book was uneven.  I enjoy the grittier pencils of Agustin Padilla in the story, which fits the action and intrigue of the story, but then the art flips to a much less detailed and cartoony style by Juan Ferreyra.  I understand that a bi-weekly title needs to meet details and sometimes an artist needs to be brought in to finish a book on time, but two completely different art styles in one book is jarring and frustrating and I feel along with the many different fill-in artists on the book, will hurt the re-reading factor of this book when it is collected in a trade-paperback.

Final Thoughts: I enjoyed the action-thriller tone of this story.  Its not a perfect story but I’m interested to see where things go from here.