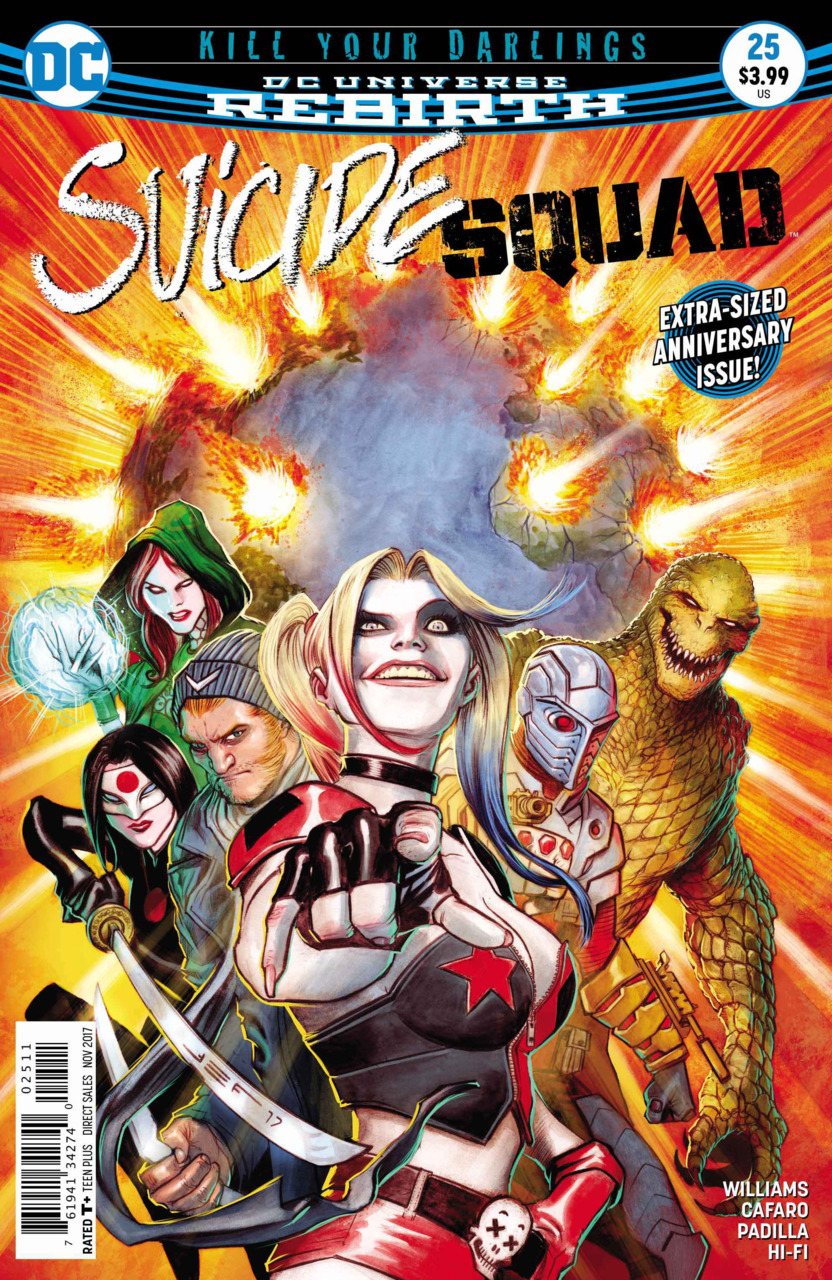 Overview: The Suicide Squad rallies together to free a mind-controlled Amanda Waller and stop an army of Suicide Squad’s from killing the world’s superheroes.

Synopsis (spoilers ahead): The issue picks up from the last one with Amanda Waller under the control of the Annihilation Brigade’s Gulag and ordering the launch of anti-aircraft missiles to take out a plane carrying an escaping Batman and Killer Frost.  Gulag/Waller is interrupted by a mini-gun toting Harley Quinn, giving a reluctant Deadshot time to hit the abort button on the missile.

Harley’s victory of the possessed Gulag/Waller is short-lived, as Waller activates the control chips in the heads of Harley, Deadshot, and El Diablo, immobilizing them.  Gulag/Waller then monologues the plans of Direktor Karla and the Annihilation Brigade to activate international Suicide Squad cells throughout the world to attack the metahuman population using the Joseph Protocols, the secret files of information on superheroes compiled by Waller.  Gulag/Waller is stopped from executing Harley by the quick arrival of Captain Boomarang, who knocks the remote controlling the control chips out of Gulag/Waller’s hand.  The group is joined by Croc, Enchantress, and Katana and Gulag is removed from Waller’s body by Katana using the Soultaker Sword.

Waller reiterates that she was under Gulag’s control and the team goes off to take down the control center for the International Army of Suicide Squads.  The team faces off against Tunguska, who is quickly taken down by Captain Boomerang.  Direktor Karla is found to have committed suicide in the control center and Harley stops the International Suicide Squads by activating their control chips, killing all of them over Waller’s protests.  Waller reasserts her control of the team by giving them all a shock and reminding them that they are hers to control.

In the epilogue, Waller meets with Batman and Killer Frost to apologize and stress it wasn’t her who ordered their capture and turns the Joseph Protocols over to Batman as a peace offering.  The issue ends with a still alive Rick Flag and Karin Grace aboard a satellite, realizing that they need Amanda Waller’s help.

Analysis: Last issue, I really enjoyed the build up to what I assumed was going to be a tense, action filled issue to bring this story to a close.  All this appears to have been for nothing, because what we are left with here is a series of missed opportunities.

The missiles heading towards Batman and Frost are quickly destroyed and they escape, quickly removing them from the story until the very end which makes me wonder what the point was in having them in the story other than as an excuse to bring Batman into the mix early in the story.

The last issue makes a big deal of showing us the new armored “Suicide Suits”, only to have them quickly taken out by Katana in a single panel.  I don’t object to the creators reminding us all why Katana is such a badass, but again, what was the point of introducing these suits if they don’t merit a single page to show what a challenge they were?

The big confrontation to end the story comes down to a grenade duct-taped to a boomerang to take down Tunuska and Harley pushing a button to kill off a bunch of unknown villains in a quick series of unremarkable and drama-free panels.  I try not to judge a book by its own merits and not where I think they should be going, but for the story to build to final confrontation with the Annihilation Brigade and an army of Suicide Squads is supremely disappointing.  It’s as if the creative team didn’t have enough space allocated to wrap the story up in a grand fashion and had to figure out how to wrap things up in single issue, and the result comes across as rushed and underwhelming.

My biggest issue with the resolution of this story is that there was a missed opportunity to shake up the status quo in this book, and instead the story quickly puts everything back to where it should be.  Waller is confronted and Gulag is removed and destroyed by Katana quickly, seemingly only to absolve all responsibility of Waller for her role in the international Suicide Squads.  The Suicide Squad then waste no time to get back under Waller’s thumb.  It would have been far more interesting for Waller to have been complicit in Karla’s plans, and maybe find herself behind bars or otherwise removed from action.  The book doesn’t even let more than a few issues pass before bringing Boomerang back to the team. I think this book would have benefited from taking an issue or two more to set up a fitting finale and not force returning all the players back to their usual places on the board.

The art in the book is well done and has a gritty style that matches the tone of the book. Cafaro’s splash pages, particularly Harley opening fire at the beginning with a mini-gun, was well executed.  Padilla’s backup art in the epilogue is passable, with his characters’ looking a little warped or squat in a couple panels.

Final Thoughts: This story had a lot of promise but opted for a quick, uncomplicated, and boring resolution that doesn’t pay off all that build up in any sort of meaningful way.